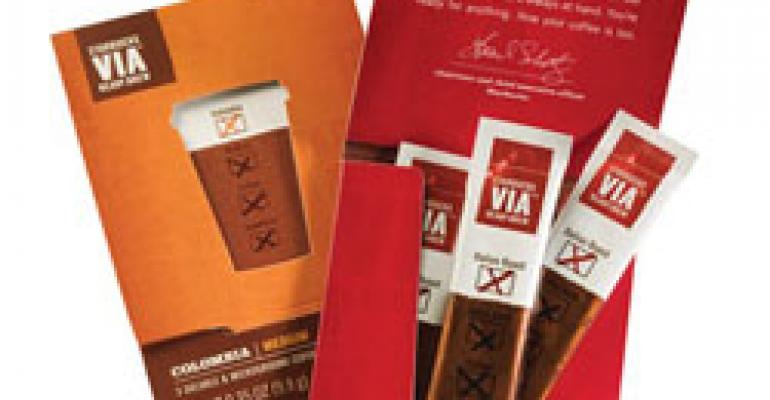 Pledging “this is not your grandmother’s instant coffee,” Starbucks Corp. said Tuesday it would roll out its VIA Ready Brew product nationally with a taste-test challenge for consumers in stores across the United States and Canada.

Starbucks chairman and chief executive Howard Schultz said the rollout would “transform the coffee industry” and give the global coffee chain a slice of the $21 billion instant coffee market — representing about 40 percent of overall coffee sales — without cannibalizing in-store beverage sales.

Starbucks first introduced the ready-brew product in February. Tests of VIA in Seattle, Chicago and London have exceeded the company's expectations, said Schultz, who noted that he has been serving it for some time at his office and home and “fooling people,” including his wife.

Convinced that the quality of VIA compares to Starbucks’ brewed coffee, the company is inviting customers to visit any store in the United States and Canada from Oct. 2-5 to see if they can taste the difference.

Taste-test participants can try the Colombia Starbucks VIA alongside a fresh-brewed cup of Pike Place Roast. Those who accept the challenge in U.S. stores will be rewarded with a coupon for a free tall brewed coffee on a subsequent visit, as well as $1 off a purchase of VIA. Participants in Canada will receive $1 off the purchase of VIA.

“We’re convinced that the majority will not be able to tell the difference,” Schultz said. “The proof of Starbucks VIA is in the cup.”

With the rollout, VIA will be available in Starbucks, Costco and Target stores nationwide, as well as “places we’ve never lived before,” Schultz said, including retail locations of specialty outdoor gear brand REI, United Airlines, Office Depot, Barnes & Noble and Omni Hotels.

VIA will not be available in grocery stores until 2010, but Schultz said, “We do see a large opportunity for the grocery aisles.”

Starbucks will support the VIA rollout with a national television advertising campaign along with a webisode series featuring comedian Erin Foley documenting a “VIA-filled road trip” as she traveled from Seattle to New York. Last week, the trip concluded as Starbucks chief financial officer Troy Alstead rang the Nasdaq opening bell to celebrate the arrival of VIA.

Schultz declined to say how much the company was spending on VIA advertising, but he noted that the investment in marketing and development was the largest to date for any Starbucks product “because of the size of the prize and how important it is.”

Unlike most instant coffee brands made with robusto coffee and fillers, Schultz said that Starbucks’ version is all natural and made with arabica coffee. He also noted that VIA can be brewed in both hot and cold liquids.

The single serving packets are priced at a recommended $2.95 for three and $9.95 for 12 — significantly more than most other instant coffee brands that offer many more cups per jar.

Schultz said the goal with VIA was not to compete with established instant coffee brands, such as Nescafe or Taster’s Choice, but to offer Starbucks fans a way to get a fresh cup of their favorite coffee in places where they couldn’t before, such as on planes, at their office or home.

“We’re not competing with instant coffee,” said Schultz. “This is a tremendous value for our customers. They’ll get a world-class cup of coffee for less than $1.”

Noting that the instant coffee market hasn’t seen any real innovation for about 50 years, Schultz said the company has “cracked the code” on instant coffee technology that helped develop a cup that reaches Starbucks’ quality standards.

During the test period, Starbucks officials said they saw no discernable impact on in-store beverage sales. VIA might cut into packaged coffee sales, however, but officials said that that was a trade they were willing to make.

Starbucks Corp., which has 16,729 coffeehouses worldwide, reported improved profitability with the help of cost-cutting and better margins in its June-ended third quarter. However, the chain continues to battle slow sales, posting a 6-percent decline in same-store sales at domestic locations for the quarter.