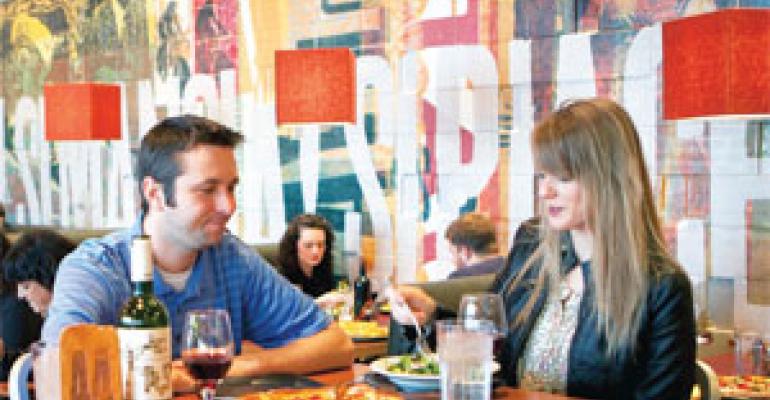 Gail and Richard Lozoff and Edwin Brownell, co-owners of four-unit Spin! Neapolitan Pizza in Kansas City, Mo., say steady franchise growth is the way to go for their six-year-old concept, as they’ve pursued this type of expansion before. The trio was instrumental in growing the upstart Bagel & Bagel brand to five units before selling it to Boston Chicken in 1995.

Their experience helped to steer them through the challenge of expanding during a recession, as the first unit debuted in 2005 in Overland Park, Kan., to fanfare and “best pizza” awards from Kansas City’s major publications, but the next three locations would open in 2007 and 2008, just when the economy started to turn.

“We told managers, ‘We’re going to go through a hard time, and our challenge is to execute and be more profitable than anybody out there,’” Gail Lozoff said. “We were hitting the sweet spot in terms of value, but we also had to run lean and mean.”

The restaurant’s food and service were designed for broad appeal, as early-evening tables can feature parents enjoying wine while their kids feast on gelato, before the later crowd gives way to young couples splitting a Neapolitan pizza, Lozoff said. The service straddles fast casual and full service; customers pay at the counter, but servers run food to their tables, take further orders and do all the follow-up of casual-dining staffers.

“One of the things we think will help us be successful in other markets is the simplicity of the concept,” Brownell said. For example, “managers like working here because of the hours. We close at 9 p.m., and 10 p.m. on weekends, and that allows them to have a good quality of life. It’s easier to manage because the dining room is not complicated.”

Consulting chef Michael Smith, Kansas City’s first James Beard Award winner, developed Spin’s menu, which includes pizzas, paninis and flatbreads baked in stone-hearth ovens, and gelato. Lozoff and Brownell said Spin has a high alcohol mix for a fast-casual restaurant thanks to its pricing: Nearly all wine bottles are $18 or less, and three or four wines, in addition to two kinds of sangria, are sold by the glass.

“We can solve lots of those issues with volume,” he said. “We wanted people to come here multiple times and have it be affordable. Our beer and wine are priced competitively, and we allow guests to bring their own where it’s legal. The thought was people would use us more and we’d be an extension of their own kitchen, and it’s worked.” Officials would not disclose average unit volumes.

Dennis Lombardi, executive vice president of Columbus, Ohio-based WD Partners, said Spin’s menu structure puts it in favorable territory for consumers, with fast-casual price points of $4 for flatbreads and $7.50 for salads, and $10 to $13 pizzas that resemble casual-dining prices. The modified limited-service model also strikes an ideal balance, he added, so long as customers don’t feel angst about tipping.

“It’s beneficial to the restaurants because it provides the opportunity for add-on sales like another beverage or a dessert,” Lombardi said. “There’s also the opportunity to touch tables and create some personal interactions.”

Spin’s award-winning interior design was meant to eliminate long lines: Customers read menu boards in an “order lobby” rather than queue up through the make line, and order when ready. Units average between 3,300 and 4,000 square feet and seat 100. Three of the four units also have bar areas, and all include patios.

Lombardi said the order lobby “allows a comfortable place for consumers to see the menu and see the food and not stop people from ordering.

“It also allows throughput that the kitchen can produce,” he said. “You’ll see that more, especially at concepts where more people have more choices for customization.”