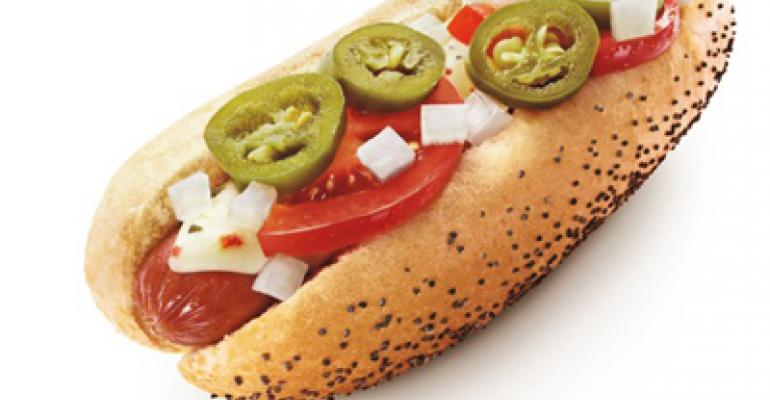 Sonic Corp. expanded its popular and profitable hot dog line this week with the debut of a limited-time spicy Baja Dog.

The Baja Dog expands upon the four $1.99 hot dogs introduced in March, which the company has credited with helping improve sales. The Baja features an all-beef hot dog with pepper jack cheese, tomato slices, diced onions and jalapeños on a poppy seed bun.

“The fun thing is the dogs are driving transactions [and] traffic on the line, but also transactions at lunch, afternoon, dinner,” Hudson said. “It's across a variety of dayparts, not just mealtime.”

Sonic’s drink business, featuring signature limeades and other beverages, has been strong, he said. “So this $1.99 dog is a very nice add-on and has been very positive in the afternoon, giving us the potential of increasing check during that day part in particular.”

For the third quarter, which ended May 30, Sonic swung to a loss as a result of repaying debt early. Sonic reported a loss of $4.7 million, or 8 cents a share, compared with profit of $11 million, or 18 cents a share, in the year-ago period. Revenue increased 4.1 percent, to $152.1 million.

Excluding losses from early repayment of debt in the most recent period and a tax benefit in the quarter a year ago, earnings increased to 21 cents a share from 15 cents.