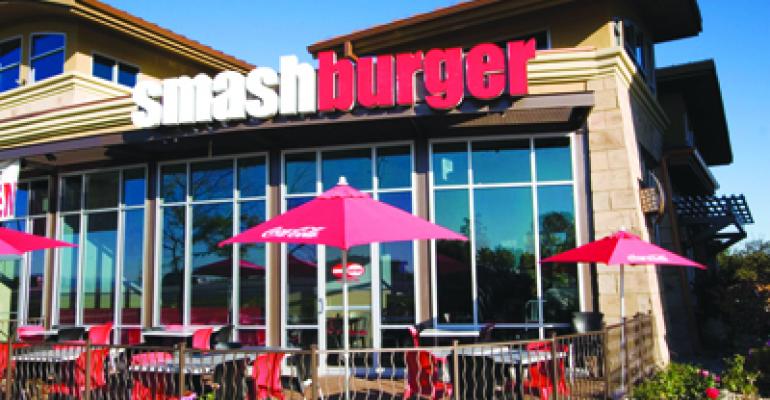 Smashburger CEO on the better-burger race

Watch out, Five Guys. Smashburger is working hard to catch up.

While the Lorton, Va.-based Five Guys Burgers & Fries has long been the leader in the “better burger” race with more than 700 locations, Smashburger is gaining ground in its goal to be the No. 2 franchised burger brand.

This week, Smashburger said it signed on six new franchise partners who plan to add 83 new units, bringing the number of locations under development to more than 500 over the next few years. By the end of 2011, the chain expects to add 85 new restaurants to its system for a total of 175.

Dave Prokupek, chairman and chief executive of Denver-based Smashburger, spoke with Nation’s Restaurant News this week about the chain’s growth and evolution.

What do you say to those who might warn you about growing too fast?

Well, I don’t think we should go any faster. One of the things about our strategy is that people are signing up to grow these Smashburgers over five- to seven-year periods. They’ll open one to three in the first 18 months and that’s not too much for experienced operators. We’re not using individual franchisees, but multi-unit operators. It’s 40 groups, each doing a little bit.

On the corporate side, we opened 14 or 18 last year. This year we will do 25. Most of our growth is concentrated in Chicago, Minneapolis and Houston. We will open in Los Angeles next year with corporate locations.

Are you trying to catch up with Five Guys?

My take is that there will be two to three better-burger players nationally. Two are established and there might be one more. If we use Chipotle Mexican Grill and fast casuals as guide, the leaders will have a couple thousand in the U.S. So you’ll see the pace of new upstarts moving to national status will start to wane.

Five Guys already has more than 700 units. We’re on a path to having 500 to 600 in four or five years. We’re clear leaders from unit perspective and in terms of capital development plans. My sense is there’s room for one other player.

So who will be third?

There are a number vying for third place. Mooyah Burgers is looking to grow. The wild card might be In-N-Out Burger, if they decide to go national with their expansion, though it’s not fast casual, per se. After that you could see a Red Robin Gourmet Burgers or someone in the casual-dining space go after it with a smaller fast-casual footprint. The one other significant player hasn’t yet emerged.

Does Smashburger’s growth indicate that credit is more available to franchisees?

We’re really focused on working only with well-capitalized franchisees. Most of our folks are $5 million and up net worth. They’re liquid. And we are requiring that they can’t use debt to build their stores initially. They have to have cash resources to build. We’ve been fortunate to be able to identify those people.

You’ve been evolving your menu as you’ve grown. What has the response been?

We’re about 80 percent burgers. The rest is chicken, hot dogs and vegetarian options. We have always had chicken, but last year we doubled our offerings of chicken and salads and created its own section. That was born from customers asking for other options, so they could use Smashburger more frequently. We’ve also just added a black bean burger in some markets as a signature vegetarian item, and that’s doing well.

We’re also continuing to add side items to increase incidents and we’re very focused on localization. We have a different menu in each market with specific regional burgers, or sometimes a shake or local craft beer. That local taste profile will continue to evolve for us.

Was the call for more chicken something you hadn’t expected?

It was a surprise to us. We were born with chicken and salads on the menu, but customers said, even though were were called “Smashburger,” that they wanted a broader range of options. We found, however, that we sold more hamburgers, even with more chicken and salads on menu. The other surprise for us is that over half of the people coming to Smashburger are coming instead of going to a casual-dining restaurant. We’ve got a really broad audience.

What’s next on the menu?

We’re looking hard at a lot of options in the drink area and the trends in carbonated beverages. Without being specific, that’s an area we’re putting a lot of effort into.

We’re seeing both positive and negative results. The primary issue is beef. We had been contracted for a year or more. Now we’re annualizing and getting some increases there that have been a little painful.

But we’ve migrated from buying off back of the truck to getting some scale benefits. Our net-net costs will be down about 1 percent this year, after absorbing a decent amount of beef-price increase. We have formed a purchasing group and are working on scale benefits. For the moment, we’re benefiting from our scale.

Have you taken a price increase?

No, we haven’t raised prices. Mostly, over the past six months, we have been taking prices down in many markets. We introduced a smaller hamburger at lower price and unbundled the price of cheese in some markets. We’re not recommending that franchisees take pricing, and we’re not doing it in corporate stores.

The smaller burger is a create-your-own, starting at $3.29, and cheese is extra. It’s in a number of markets and performing well. It appeals to people who want to eat lighter or have smaller appetites. The original one-third-pound burger was $4.99 for a classic.

I think value for next three to five years will be a key topic. Household balance sheets still are not really repaired and even though we’re in slow recovery, the impact of $4-a-gallon gas and rising supermarket prices will make it tough for all restaurants.