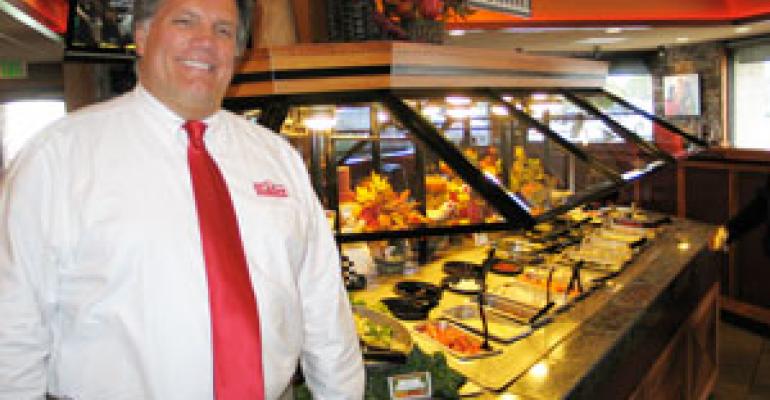 CULVER CITY Calif. After two years of halted growth, the more than 50-year-old Sizzler chain is setting the stage for a franchise push with a new restaurant design, an upgraded menu and a new management team — the head of which actually wants to buy the chain.

Kerry Kramp, president and chief executive of the Culver City, Calif.-based Sizzler USA, said in an interview with Nation’s Restaurant News that he has spent the past 18 months revamping the 191-unit “family casual” chain to become “recession proof.” He now wants to buy Sizzler from its current owners, if or when the economy improves and funding becomes available.

He added in a later interview this week: “My goal is to buy the company and have it be owned by management.”

Today, Sizzler is owned by Australia-based Pacific Equity Partners, or PEP, which brought Kramp on as chief executive in 2008. PEP had then been considering the sale of the brand, but shelved those plans because of declining market conditions. PEP also owns Sizzler International, which includes 83 locations in Australia, Japan, South Korea, Taiwan, Thailand, Singapore and China.

Since Kramp took the helm, about 30 underperforming Sizzler locations have been closed. Kramp said Sizzler USA’s sales have remained positive through the economic downturn, however, despite the fact that many of the chain’s units are located in the hard-hit market of Southern California.

To boost sales and prepare for brand growth after two years of regrouping, Sizzler has developed a new prototype design and debuted a new menu. Two locations — the Inglewood location and another in Hesperia, Calif. — have been remodeled and saw sales increase by more than 20 percent, Kramp said.

The new prototype includes a more “Americana” look, with light and dark woods, earth tones and stone walls. Colorful photos on the walls aim to reflect the specific neighborhood, and large flat-screen TVs hover over the dining room.

Click here to see photos from the revamped Sizzler in Inglewood.

The cosmetic changes were designed to work easily as restaurant conversions in spaces that may previously have been an Applebee’s, for example, or even a Blockbuster video store, Kramp said.

Indeed, Sizzler is hoping to take advantage of casual-dining locations that have closed and might be suitable for conversion. To help spur that growth, Sizzler has hired Mark Lyso as director of franchise development. Lyso previously spent 14 years with Famous Dave’s of America, helping that brand grow from two units to 175 locations.

Lyso joins a management team that includes Dennis Scott, who initially aided the brand as a consultant and last year was named chief of strategic development. Scott is co-founder of Buffets Inc., parent to the Old Country Buffet and HomeTown Buffet brands, where Kramp once served as chief executive.

In addition to its prototype and growth plans, Sizzler also is rolling out a new menu, which has been simplified and updated and includes new value-focused pricing.

The number of items was reduced by about 25 percent, and existing items, including the signature Malibu Chicken, have been updated or improved, Kramp said. Steaks, shrimp and salmon remain core items, but the new menu includes a grilled pork chop and value-focused combination meals. For example, steak, lobster, a baked potato and one trip to the salad bar is priced at $17.99 per person.

Sizzler moved away from an all-you-can-eat buffet format years ago, but the extensive salad bar remains a key selling point at a time when consumers want more for their money, Kramp said. The salad bar includes hot appetizers, such as tacos and chicken wings, while the sundae bar features soft-serve ice cream, toppings and other desserts.

The new menu offers an Endless Salad Bar option with entrees starting at $9.99 at dinner, and $7.99 at lunch. Previously, the salad bar cost an additional $3.99. In addition, guests can now un-bundle the salad bar or order a “one-trip” salad, allowing them more options.

Kramp also said the chain is moving toward more in-house food preparation, with items like soups, salad dressings and fresh guacamole made from scratch in units. Steaks will be hand cut in restaurants — allowing for better control of costs — and breads and desserts will also be baked in house with some restaurants offering mini-bakeries.

“We want there to be no veto votes,” said Kramp. “Guests will be so blown away.”

Though the shift to in-house preparation creates a layer of complexity not common in franchised brands, Kramp said the company has developed new systems and procedures that will simplify operations.

Smarter purchasing management has helped bring food costs down, allowing the brand to keep its across-the-menu focus on value and quality, he said. For example, the chain is now working with a strategic group purchasing firm called SpenDifference, based in Boulder, Colo., which leverages combined buying power of client companies to get the best deal.

Also to enhance the guest experience, Sizzler will soon begin testing self-service kiosks that allow guests to place their own orders electronically. The kiosks will also offer nutrition information and help guests select a meal based on specific dietary needs, such as low-sodium or low-fat items.