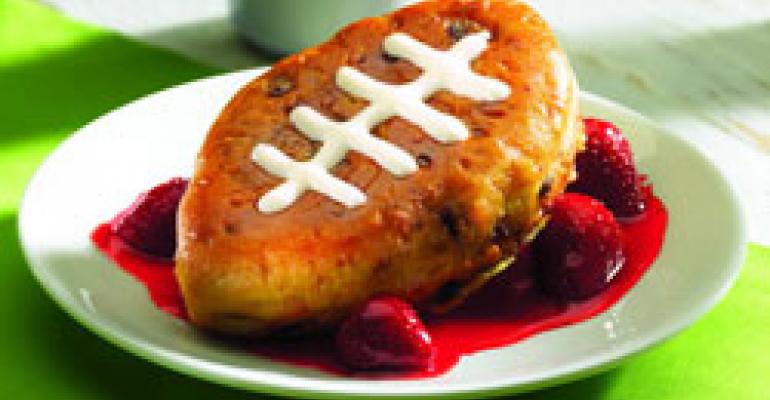 With Labor Day signaling the return to the gridiron, several restaurant companies are blitzing guests with football-related promotions.

IHOP, Wingstop, T.G.I. Friday’s, Chick-fil-A and KFC are among the concepts now rushing for football-inspired sales. Meanwhile, others are already well into the game. Buffalo Wild Wings Inc. has hosted fantasy football gatherings and even has part of its website devoted to the hobby at www.buffalowildwings.com/ffblogleague.

The connection between pizza, wings and football is well established, but as the professional football season kicks off Thursday with the National Football League’s 90th season opener pitting the Pittsburgh Steelers against the Tennessee Titans, operators are looking to broaden that link to other food items.

“We are thrilled to extend the excitement of the NFL to our guests with unique products that bring football and food together in a whole new way,” said Carolyn O’Keefe, IHOP’s senior vice president of marketing.

IHOP’s sponsorship marks the first time the NFL has teamed with a national full-service restaurant chain to promote menu items. Through the promotion, select items start at $4.99 and are available any time of day. The menu includes stuffed French toast in a football shape with strawberries or blueberry compote; pancake specials; and a “Veteran Quarterback Scramble,” with smoked sausage, hash browns and cheddar cheese with two buttermilk pancakes. The promotion runs through Oct. 25.

As part of the promotion, NFL stars Donovan McNabb of the Philadelphia Eagles and Larry Fitzgerald of the Arizona Cardinals each star in new national IHOP commercials that feature their best order-taking and plate-catching skills. The players also appear on a special page of IHOP’s website at www.ihop.com/nfl, where the chain offers games and prizes.

Yum! Brands Inc. and the NFL have signed a deal to make KFC the sole fast-food marketing partner for the league, according to a Wall Street Journal report on Sept. 4. The NFL ended its sponsorship agreement with Burger King Holdings after the 2007 season. Last year, KFC was the “official wing sponsor” of the NFL, allowing the quick-service chicken chain to use the NFL and Super Bowl logos on buckets and cups.

In late August, the 450-unit Hooters of America Inc. of Augusta, Ga., rolled out a football-inspired limited-time-offer menu that features items starting at $4.99. Mike McNeil, Hooters' vice president of marketing, said the chain hosted more than 6,000 fantasy football league draft parties in August. And this year, the chain offered draft party kits with "Hooters Season Tickets" that included $500 in food and beverage savings for those who participated in the draft to use throughout the football season.

On Labor Day, Chick-fil-A offered a free chicken sandwich to anyone wearing an outfit featuring their favorite sports team logo.

T.G.I. Friday’s on Saturday said it would host the “Largest Kickoff Party In the USA” by offering bar guests six free buffalo wings at football-watching parties this coming Thursday, Sunday and Monday. The casual-dining chain also will offer specially priced appetizers at the bar all season long, including six wings for $3.99, half-rack baby back ribs for $7.99 and two Jack Daniel’s sliders for $3.99.

Other chains have teamed up with their regional professional football favorites to create fall promotions. Wingstop Restaurants of Dallas plans to outfit its stores throughout Texas with to-go cups, bagging and point-of-purchase materials branded with the Wingstop/Dallas Cowboys official logo. Store employees are wearing caps featuring the Cowboys/Wingstop logo as well.

Wingstop restaurants across the country that are not participating in the Cowboys promotions have generic, or non-team-specific, football-themed to-go cups and bagging.

Wingstop is supporting the Cowboys promotion with a football-themed e-mail blast to customers. In addition, on Nov. 1 at the new Cowboys Stadium, Wingstop will give away 40,000 football-shaped compressed towels to fans as they exit. The towel will feature the Wingstop/Cowboys official logo, and include a coupon that offers guests free wings with purchase in DFW restaurants.

Buffalo Wild Wings has staked its defensive on the popular fantasy football leagues, many of which meet in their restaurants. This year, the operator has teamed with pro-football studio host Trey Wingo, who will serve as commissioner for the 2009 fantasy football season.

“We know our guests are passionate about fantasy football by watching them pack our restaurants on game days with their laptops and game faces,” said Sally J. Smith, president and chief executive of Buffalo Wild Wings.

She said she sees Wingo and the blogger league as another reason for guests to watch football at her company’s units. Wingo’s comments will be featured on the company’s fantasy football site and on Twitter at www.twitter.com/WildWingo.