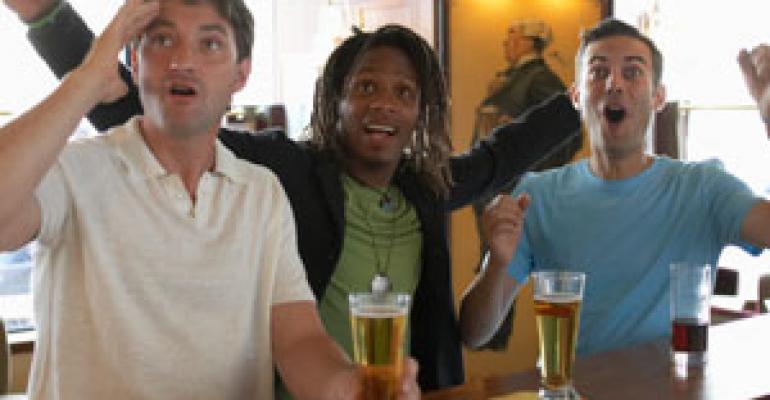 March Madness, the annual men’s and women’s college basketball tournament to decide the national championship, can be a slam dunk for restaurateurs.

New research conducted by the National Restaurant Association said 20 percent of American adults expect to involve restaurants and bars in their March Madness plans this year.

Consumers surveyed said their top choices for watching games, which begin Tuesday evening, would be eateries that offer special-price deals, such as happy hour, 34 percent, and have the best selection of televisions, 25 percent.

“Sports-themed establishments are not the only ones catering to college basketball fans — many restaurants and bars will attract a crowd during the upcoming games,” said Hudson Riehle, senior vice president of the NRA’s Research and Knowledge Group.

“More than half of guests are looking for happy-hour specials and high-quality television options when selecting a restaurant or bar to cheer on their favorite team. But about one-fifth also look to menu options when choosing where to go.”

According to the NRA, 16 percent of consumers said they plan to order takeout or delivery from a restaurant to be eaten at home or at a friend’s while watching tournament games. Another 8 percent said they would watch games at a local restaurant or bar, and 4 percent of respondents plan to do both.

The nation’s biggest restaurant chains will be ready to press their offers when games tip off.

Domino’s Pizza, which began a multiyear sponsorship of the NCAA this year, rolled out its Domino’s Pizza Bracket on Facebook and a March Madness Pizza Tracker on Monday, which it calls “National Bracket Day” in honor of the millions of people wagering on the tournament’s outcome.

The pizza bracket will pit the chain’s popular menu items against one another in a similar tournament, and different pizzas will advance based on Facebook fans’ votes. The winning menu item will be announced during the weekend of the Final Four. The Pizza Tracker online application also will carry March Madness video and audio upgrades throughout the tournament.

“We are confident that each pizza is ready for the challenge, will play hard and show good sportsmanship,” said spokesman Chris Brandon. “But, seriously, this is a very cool way to interact with our fans, and we can’t wait to follow the action and see the results.”

Pizza Hut also will be following the tournament games closely, and will offer free pizza to the nation if a No. 16 seed upsets any No. 1 seed in this year’s tournament. The offer — similar to the gamble Papa John’s Pizza made in this year’s Super Bowl, promising free pizza if the game went into overtime — should engage fans and produce positive public relations for the chain, Pizza Hut officials said.

“If a No. 16 seed wins, America wins,” said chief marketing officer Kurt Kane. “An upset of this magnitude would be an unmatched sports moment, which deserves an unmatched celebration from Pizza Hut.”

Kane added that if the ultimate Cinderella story came true, Pizza Hut would take its mobile kitchen to their 48 contiguous states and hand out free pizza at specified locations.

Other brands, like Buffalo Wild Wings and Pizza Inn, will try to get people to follow March Madness via their websites, each using a “pick ’em” challenge for which prizes are awarded to customers with the greatest number of correct picks on their brackets. Pizza Inn’s first-ever Pick ’Em will award free pizza for a year to the first-place winner, and $100 gift cards for second through fifth place. Meanwhile, the “BWW Bracket Challenge” at the chicken wing specialist will reward the top finisher with an Apple iPad.

Casual-dining brand Applebee’s Neighborhood Grill & Bar will attempt to drive traffic with advertising that disparages watching tournament games on a computer or mobile device, as a way to emphasize the restaurant’s sports-loving atmosphere and bar specials.

“The tournament is one of the most exciting sports events of the year, and if you’re watching it from your office or cubicle, we say there is a better way,” said Mike Archer, president of Applebee’s Services Inc. “College basketball is an American pastime meant to be enjoyed with friends over great food and drinks, and there is no better place for that than Applebee’s.”

Applebee’s also will be the exclusive sponsor of ESPN’s online Round by Round Pick ’Em. The chain is offering different specials on game days within its 1,850 restaurants, and information is available at www.applebees.com/hoops.

Wing chain Quaker Steak & Lube will be updating its “Munch Madness” special offers and fan contests on its Facebook page throughout the tournament. The brand also has an on-site restaurant and several kiosks at one of the official tournament locations, Quicken Loans Arena in Cleveland.

The NRA surveyed 1,010 American adults on March 10-13 about their plans for the 2011 men’s college basketball tournament.