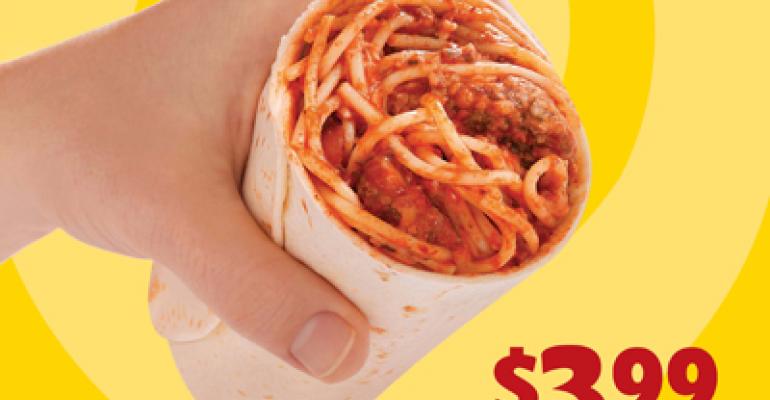 Restaurants put their spin on wraps

While wraps have emerged as dependable staples of many sandwich and bakery-café chains, a number of other concepts like Fazoli’s and Boston Market are looking to put their own spin on the popular item.

Wraps often are positioned as menu items for customers who are watching their weight, but quick -service pasta chain Fazoli’s is taking a different approach as it tests three pasta wraps.

Sausage and pepper penne, spaghetti and meatball, and chicken Florentine Alfredo all are being offered in five of the chain’s 250 restaurants, all near colleges, in two markets: South Bend, Ind., and Champaign and Normal, Ill.

A spokeswoman for the company, based in Lexington, Ky., said the product had “immediate high appeal” for the 18- to 25-year-old group. “And once other age ranges tried it, they were surprised to find they liked it,” she said.

The 487-unit Boston Market is not a concept known for its sandwich menu, but the Golden, Colo.-based chain is currently looking to boost traffic in dayparts outside of lunch and dinner with the test of three different wraps, said chief executive George Michel.

The fast-casual brand is testing a Chicken Caesar Wrap, a Santa Fe Chicken Wrap and a Mediterranean Chicken Salad Wrap in 20 different markets. The wraps are available in different sizes at different prices: $4.99, $5.29 and $5.99.

“We want to benchmark it and see which size and price works best,” Michel said.

But other recently introduced wraps chiefly have been offered with whole-grain breads.

• Quiznos extended its “sammies” wrap line with a mesquite chicken whole-grain flatbread wrap, which was just launched as a limited-time offer.