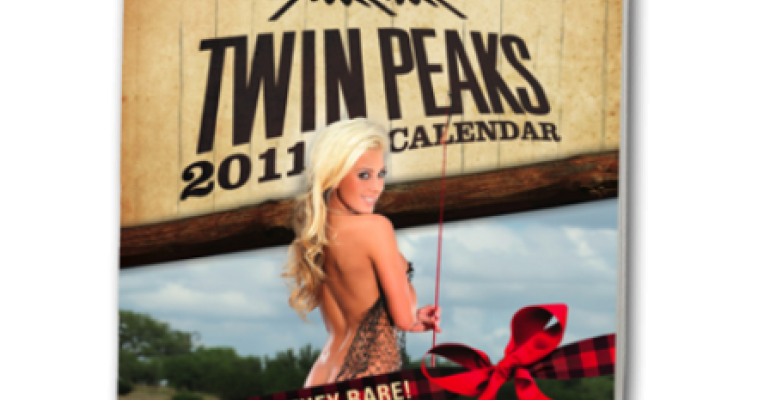 As restaurant customers turn the page to a new year, many will be doing it with calendars from their favorite eateries.

Old-fashioned, month-by-month paper calendars, which seem rather quaint in this age of computer-based datebooks and smart-phone schedules, can provide a timeless time-keeper – and a restaurant branding opportunity – from the cheeky cows of Chick-fil-A to the rosy cheeks of Hooters servers.

“We see it as a huge branding resource,” said Mark Baldwin, spokesman for Chick-fil-A. “People love to hang them in their homes and cubicles and offices at work. It provides laughs as well as coupons.”

The Chick-fil-A “Eat Mor Chickin” cows for 2011 take on popular reality television programs in the $6 “You Can’t Script the Fight Against Burgers,” which follows up last year’s cows in great literature. The Atlanta-based fast-food chain has offered the cow calendar since 1999.

For 2011, the cows’ are in such fictional shows as “Boogyin’ with the Bovines,” a dance competition featuring cows attempting to “show the world that it’s better to see a cow cut a rug than see one become a cold cut,” and “The Beefcake,” a dating show starring 20 heifers vying to win the affection of a “prize bull.”

The calendar also includes monthly food and beverage offers. Baldwin said, “To be honest, customers love the coupons that come with the calendar. There’s typically $25 to $30 worth of free-food coupons in there, so every month you get something.”

January, for example, offers a coupon for Chick-fil-A’s new spicy-chicken biscuit or a bowl of soup.

Hooters, based in Atlanta, has offered pictures of its servers in calendar form since 1986. It is now adding an iPhone calendar girl application. This year’s 25th anniversary Hooters calendar, which is priced at $12.95, features a special salute to the military with a pullout centerfold poster. The iPhone app is 99 cents and dubbed “On the Go Girls.”

Front Burner Restaurants LP of Addison, Texas, has produced its Twin Peaks calendar for the second year, which features coupons worth more than $200 and photos of 24 Twin Peaks servers frolicking at a rural Texas resort.

"From getting muddy on [all-terrain vehicles] and soaked while washing a tractor to running around with hunting dogs, the girls had a blast posing for these gorgeous shots,” said Meggie Miller, Twin Peaks’ director of marketing. “But some are much more than pretty faces; they’re pre-law students, English majors, and future teachers, among other things. They’re smart, witty, and wholesome.”