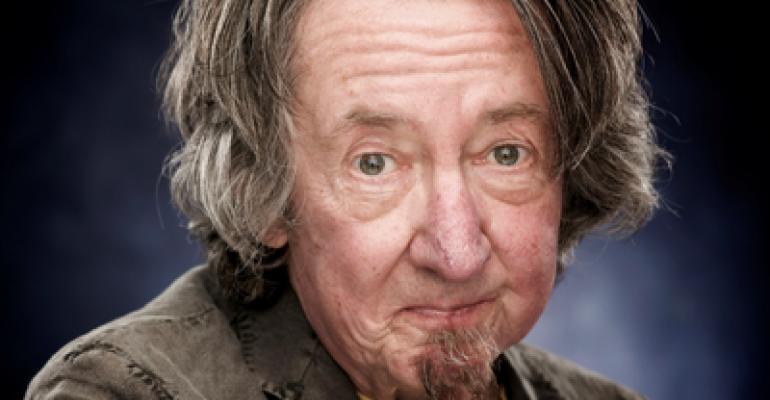 Gary “Gaz” Regan always knew he would be in the bar business. His family ran pubs in England and he entered the world of bartending by working in his family’s establishment at the age of 14.

When asked, “Is that legal?” Regan laughs and answers, “ no, but the cops used to come to the pub after we closed and get free beers, and left us alone.”

When he was young, he envisioned himself owning a small chain of upscale British restaurants. He got as far as opening his first restaurant when he was 20, but in his words “ran away to New York when I was 22.”

In the United States, he first worked in a bar in the Upper East Side of New York in 1973 and continued working behind the stick at various bars in the city for 20 more years before he started writing in 1990. Three years later, writing became a full-time gig for him.

Regan is now well known as one of the leading authorities on cocktails and bartending. He has written several books on the topics, most notably, “The Joy of Mixology” in 2003. He’s also written for multiple publications, including a regular beverage column that used to run in the pages of Nation’s Restaurant News.

He stayed true to his desire to work in the bar business, but things just worked out a little differently from his original plans.

While Regan might not be behind the bar much nowadays, he remains connected with the colleagues and friends he has made throughout the years, spending four hours each day on Facebook and answering emails. He also has a long-running website, Ardent Spirits, from which he sends out frequent newsletters, and he started the Worldwide Bartender Database in 2006, a database for industry job listings and other opportunities.

His dedication to innovation in the industry and forwarding the ideas of hospitality and service recently came together in his new book, “Gaz Regan’s Annual Manual for Bartenders.” The book highlights techniques as well as features 101 cocktail recipes picked from those submitted by bartenders around the world.

In May, he recognized 20 bartenders for their contributions to the alcohol service industry with the Gazzer Awards during a large awards ceremony held during the Manhattan Cocktail Classic in New York City.

I wanted a way to be completely subjective and select the 101 drinks that I thought were fabulous and have it become an annual event.

What we do now in the 21st century is we try to look back on the 19th and early 20th centuries to figure out what was going on then. What I wanted to do with the Annual Manual was leave a record so that bartenders a 100 years from now will know exactly what was going on. There will be no “Who was doing what?” or, “What kind of drinks were being made?”

How did the 101 Best New Cocktails and the Annual Manual turn into the Gazzer awards?

The awards ceremony was for the 12 people I selected as fabulous bartenders and the 8 people I selected as fabulous innovators. The fabulous bartenders were selected for all sorts of different reasons. The innovators were people like Jamie Boudreau [a Canadian mixologist and consultant now based out of Seattle] and Tony Conigliaro [London-based mixologist and bar owner] who’ve bought different methodologies into the craft. And again, that was part of wanting to detail who did what.

For the bartenders who received a Gazzer not for innovation, what criteria did you use to pick them?

I’m trying to highlight people who are good in service, and not only with individual customers but also people like Andy Wells [of Ducktown Tavern as well as the Atlantic City Bartender Training Center in Atlantic City, N.J.]. He does loads for charity. He does loads to discourage drunk driving. Those people deserve recognition.

With detailing recipes and techniques as well as who did what, is it because there’s a lot of quibbling nowadays about what is proper when it comes to cocktails, in particular the historical or classic ones?

I don’t believe in a proper way of making drinks. I think recipes are nothing more than guidelines and I think you should build it to your taste and make it however best it works for you. I often say, and I’m forgetting who said it, when you make a famous old recipe, and I’m thinking of lobster Thermidor, do you really go back and look for the original recipe? You don’t. You take a look in the “Joy of Cooking” and you make it how you’d want to.

I had one submitted where this person muddled fresh rosemary into watermelon. And I just thought that is a fabulous combination. I haven’t tested it yet, but if that tests out well, it will be in next year’s list.

Having said that, I hate watermelon, but the force of those two flavors together, it just makes sense.

How did the Worldwide Bartender Database come about?
A friend of mine who is a business man, which I am not, he said, “Listen, you’re in touch with all these bartenders all over the world. It would really do you some good to collect information about them.”

Now bear in mind I’ve never made any money off of the database, but it has helped my profile and it has helped the liquor companies get in touch with bartenders and helped bars find staff and all sorts of good things. I reckon it’s a worthwhile endeavor.

Who are the people that use your database?
80 percent of the members are US-based…but then the other 20 percent is spread out all over. I have a big clutch in the UK then I have a good size in Australia, New Zealand and Germany. But then I have half a dozen people in China and people in Sri Lanka, it’s really crazy.

Have you seen an increase in job listings in other countries?

Not that many, but now I’ve started getting ads for people needed to train bartenders in Beijing, that kind of thing.

So, it’s more like bars in other countries trying to emulate the American style of handcrafted cocktails and needing people to train their staff to do that.

Yeah, and the good news is all the people who post these ads tend to fill those positions quickly.

Any tips for aspiring bartenders?

In order to get into the craft I highly recommend going to bars where you know they are making good drinks and just sitting there and watching and picking the bartender’s brain. Most bartenders are very good at sharing and the first step towards becoming a bartender is becoming a bar back.