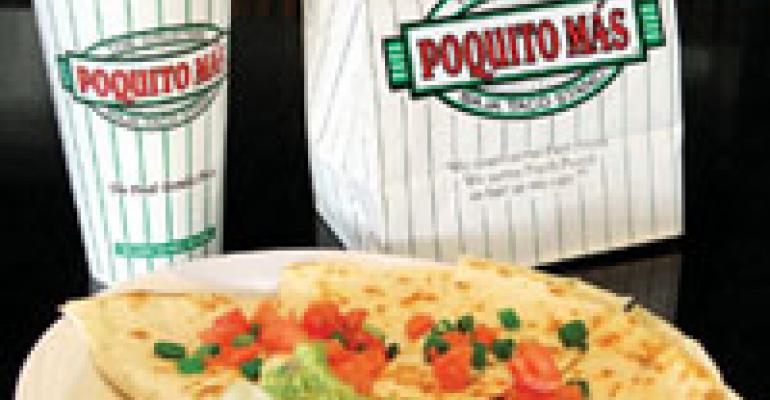 When asked why an Irish guy with a name like Kevin McCarney is founder and president of a Mexican food chain, the restaurateur has a simple response: “Because I love Mexican food.”

Some decades back, McCarney worked at a Southern California taco stand while in high school. Later, while on one of his family’s many trips to Mexico, he discovered that the Americanized ground-beef tacos he had dished up in high school were nothing like the real thing found along the Baja California coast.

In Mexico, taco stands were more likely to feature freshly caught fish and shrimp, deeply flavorful slow-cooked pork, or spicy marinated and grilled steak and chicken, depending upon the region. The best taco stands, he discovered, don’t open until the sun goes down, and McCarney made a point of eating where the locals ate whenever he could.

In 1984, after getting started in a foodservice career that included stints in full-service restaurants such as the upscale Velvet Turtle chain and HoneyBaked Ham retail stores, McCarney decided to follow his passion. He opened the first location of Poquito Mas, a fast-casual restaurant that attempted to capture the fresh flavors of the taco stands he fell in love with in Mexico.

At the time, McCarney was on the cutting edge of what was to become a hugely popular trend in fresh Mexican dining.

La Salsa Fresh Mexican Grill had opened in Santa Barbara, Calif., in 1979 as a taqueria pioneering the concept of freshly made Mexican fare without the use of lard, canned beans or salsa from a jar.

Not far away in San Diego, the first Rubio’s Fresh Mexican Grill opened in 1983 with a similar emphasis.

Now 25 years after the first unit opened, Poquito Mas, which in Spanish means “a little bit more,” includes 10 units around the Los Angeles area—growth that has paled in comparison with the now 195-unit Rubio’s and 255-unit Baja Fresh, for example.

At Poquito Mas, all food is made from scratch in units. A key point of differentiation is that both corn and flour tortillas are made fresh in front of guests, using a tortilla press McCarney had designed for his restaurants.

At the most recently opened prototype location in Sherman Oaks, Calif., guests can sit at a bar and watch the tortilla maker shape the masa, flatten it in the press and grill the resulting tortillas quickly to be used immediately for the burritos, tacos or quesadillas.

The concept has generated positive reviews among its patrons over the years. For example, awarded it four out of five stars, while one of the website’s contributors wondered, “Don’t know why I don’t eat here more often.”

With an average check of about $10 and a menu that includes higher-end options such as ahi tuna tacos and burritos made with pan-grilled shrimp scampi, Poquito Mas also offers a variety of portion sizes. Guests can choose the classic over-stuffed burrito for about $6.95, for example, or select a smaller “petito” version for $4.95. The petito size is available for seven of the most popular menu items.

Soon the restaurants will add a third option: a “mini mas” burrito, now available for parties and catering, which will be priced at about $1.95 each on the restaurant menus.

McCarney said the range in pricing appeals to the value-conscious, and the varying portion sizes appeals to diners who want to eat lighter or those who want to taste something new as an add-on without investing in the full-priced dish.

“I think this is the thing of the future—multiple-sized portions,” McCarney said.

This year the company also will add online ordering and is planning an iPhone application for mobile-phone orders as well. Sales are split fairly evenly between lunch and dinner, and 20 percent to 30 percent is takeout business, depending on the location.

Systemwide sales in 2008 topped $14 million, he said. Poquito Mas is expecting to see revenues for 2009 up between 2 percent and 8 percent, depending on location. Units in 2009 were averaging about $1.3 million in restaurants ranging from 890 square feet to 2,700 square feet.

“We’re going to be in more aggressive growth mode than in the past” in 2010, he said. “But we’re also going to be more choosy about locations.”

McCarney expects two to four restaurants to open in 2010. So far, franchisees primarily have been former employees who have worked with the company from early days. Half of the chain’s 10 units are franchised.

Now McCarney is open to outsiders as franchisees, but only those who are qualified to take on what he describes as a “lifestyle, not a hobby.” More corporate-owned units also are planned, he said.— [email protected]