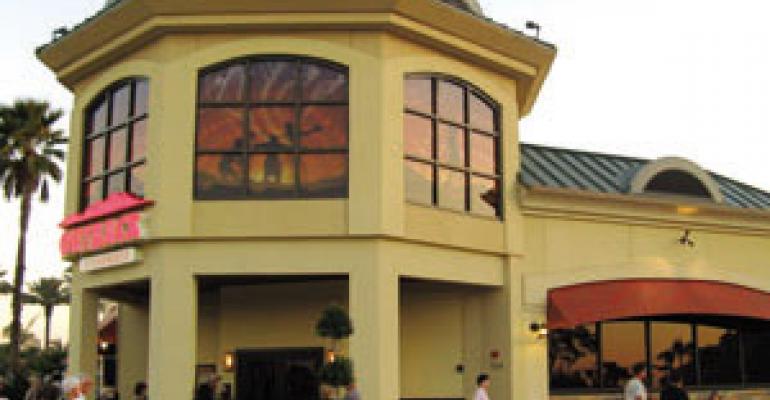 OSI, which operates about 1,400 casual-dining restaurants under such brands as Outback, Carrabba’s Italian Grill, Bonefish Grill and Fleming’s Prime Steakhouse & Wine Bar, is continuing to seek a buyer for its 34-unit Roy’s Hawaiian fusion chain as disclosed last fall and also plans to sell its 38-unit Cheeseburger in Paradise chain. Last October OSI disclosed that it was selling an 80-percent interest in the six-unit Lee Roy Selmon’s chain to co-founders Lee Roy Selmon and Peter Barli, the brand’s longtime president. —

OSI’s overall plan is to divest the concepts that are less growth-oriented and focus on the core concepts, officials said. OSI also plans to keep the two-unit Blue Coral Seafood & Spirits, located in California, although there are no current plans for further development of the high-end concept. —

The Tampa-based company was taken private last year by a group that included chairman and co-founder Chris Sullivan and the company’s two other co-founders, Bob Basham and Tim Gannon. OSI assumed about $2.4 billion in debt to fund the $3.2 billion leveraged buyout. Also participating in the deal were private-equity firms Bain Capital Partners and Catterton Management Co. —

“The overall industry is very challenged in an exceptionally challenging year, and Outback is no exception,” said Paul Avery, OSI’s chief operating officer, in a private interview at an Outback unit in Naples, Fla. “It is requiring us to think and work differently, and the team is fired up with the changes that are taking place as the Outback brand evolves.” —

Among those changes are a bolder, more contemporary look now sported by three of Outback’s newest restaurants, in Miami and Naples and Butler, N.J. —

“The physical plant wasn’t as fresh as it should have been,” said Avery, a 19-year veteran with the chain. “I think we should have been doing this a couple years ago.” —

The new look and the plan to focus on the core concepts are steps in the right direction, said Craig Weichmann, managing director of Mastodon Ventures Inc. in Austin, Texas. —

“They are taking a multi-pronged and well-coordinated approach to gain market share in its core brand,” Weichmann said. “I applaud that. But this is also an indication of how tough the market is. Ten years ago you wouldn’t have heard Outback out there mounting this type of attack.” —

“This [new look] is a radical departure from the rustic Australian-bush look that was their roots,” he added. “The question is: How does a legacy brand introduce a new look and not confuse the customer? That is one of the risks they are running, and casual-dining remodels don’t get a whole lot of punch for their money, especially compared with QSR and chicken chains.” —

“That’s about a seven-year pay-back,” he said. “On the other side, if they don’t do the upgrade, it could result in a 10-percent sales drop.” —

Avery would not reveal the cost of the new look nor its affect on sales, but noted a “very favorable increase.” —

All new Outback units will sport the new look, and existing, mature restaurants will be remodeled over time, Avery said, declining to specify a time frame. He said OSI plans to open about 20 restaurants in 2008, eight of which will be Outback units. That number is way down from the record 74 Outback restaurants built in 1994, Avery said, but 20 is consistent with the number of units opened annually in recent years. —

Carrabba’s also has debuted a new interior at units in Nashville, Tenn., and South Miami. A new exterior will be unveiled at an undetermined location later this month. —

OSI earlier this month packed newspapers with 10 million free-standing inserts offering $5 off Outback Steakhouse’s current roster of LTOs, which range in price from $13.99 to $19.99. —

The LTOs, which are tied to the concept’s 20th anniversary celebration and the signature Bloomin’ Onion appetizer, include Slow Roasted Sirloin Medley for $13.99; Fresh Tilapia with Pure Lump Crab Meat for $15.99; Sirloin, Shrimp and Scallops Mixed Grill for $16.49; and Chargrilled Tuscan Ribeye for $19.99. —

The LTOs will be available through April, said Avery, who noted that LTOs would now be offered three to four times a year. —

“They are making some big noise, and given the size of their system and their muscle, this will have a lot of impact on raising the bar and on their competitors,” Weichmann said. “The question will become, does this put them in worse shape in managing debt and cash flow, and put more stress on them, or does it come with a solution that is a new breakout for them? Only time will tell.” —