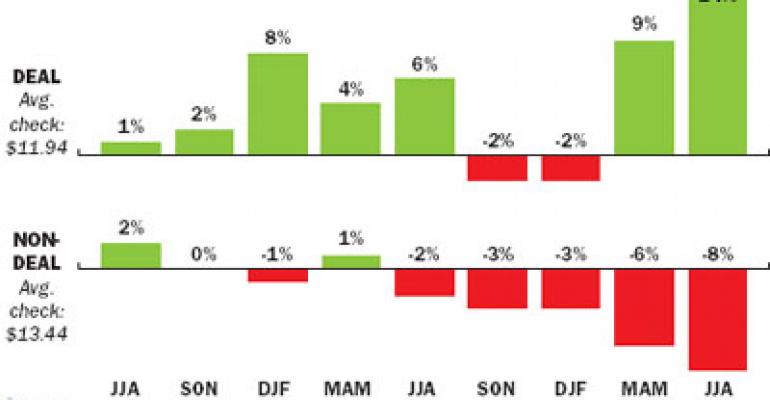 From Ginsu knives sold via infomercials in the 1970s to the fast-food combo meals first introduced in the early 1990s to today’s telecommunications “triple plays” in which Internet, cable and phone services are bundled together, Americans have always loved a packaged deal. Add a recession into the equation, and the passion mounts for several items at one seemingly low price.

Casual-dining chains discovered the power of the packaged deal this summer when they introduced a variety of bundled or multiple meal deals that notably increased customer visits, said officials at market research firm The NPD Group.

“These deals this summer really resonated with [consumers] and piqued their interest,” said NPD analyst Bonnie Riggs. “We all know that everybody’s been dealing, but I don’t know that [operators] know that it’s been working.”

“This really was an opportunity to go out and treat themselves,” Riggs said of the increase in weekend traffic.

While casual dining accounted for just 9 percent of total industry dealing in the third quarter of the year, the segment had the largest contribution to growth, NPD found. Casual-dining deals contributed 55 percent to the industry’s overall deal growth, more than quick service and midscale combined.

Major chains rolled out most of the deals, NPD found. In the quarter ended in August, about 25 percent of visits were on a deal, up more than 20 percent from a year earlier. During the same time period visits on a deal increased only 5 percent at casual-dining independents and just 1 percent at small casual-dining chains.

Among the bundled or multiple deals from casual-dining chains this summer were a create-your-own-combo deal at On The Border, a buy-one-entrée-get-one-free special at T.G.I. Friday’s, and a promotion for two entrées priced at just $20 at Applebee’s.

While deals brought consumers in, it seems those who made visits because of deals spent almost as much as those on non-deal visits. In the quarter ended in August, the average deal check was $11.94, and the average non-deal check was only slightly more at $13.44.

“This suggests it allowed [consumers] to trade up in the menu,” Riggs said, noting the mere $1.50 difference in the check averages.

With bundled meal deals casual dining has taken a page from the quick-service playbook, which has had success with combo meals for more than a decade.

Lombardi notes that the tactic won’t drive traffic for all brands.

“It’s a matter of how the consumer sees the bundle,” he said. “If some of the bundle has marginal appeal, then it falls apart. If all the parts are desirable, then it works.”

What’s so appealing about the bundle is its ability to give a sense of value without sounding cheap, says Richard J. George, an industry consultant and professor of food marketing at St. Joe’s University in Philadelphia.

“When we bundle, we create this aura—it sounds like I’m getting extra value,” George said. “There is a perception that when I buy multiples I’m getting more.”

But the tactic is not necessarily the answer to all of casual dining’s problems. Though packaged deals drove consumers to visit casual-dining restaurants at weekend dinnertime in the third quarter, it was not enough to offset the drop in weekday visits, which declined 8 percent from a year earlier, according to NPD. Total casual-dining traffic was down 4 percent in the quarter.

“Casual dining has really learned…that the closer they stayed to the consumer the better off they were,” said Chris Tripoli, president of A La Carte Foodservice Group in Houston. “Just price by itself didn’t win. In some cases, just reduced price hurt—it didn’t generate traffic.”

With so many casual-dining chains rolling out these offers and other brands sure to follow suit, there is the potential to give the segment a sense of sameness. But Tim Hackbardt, chief executive of White Barn Group, a San Juan Capistrano, Calif.-based consulting firm thinks that may actually be a good thing.

“A few years ago casual-dining prices got really expensive,” he said. “They got greedy. There’s a collective effort and a collective awareness by consumers that casual dining now has affordability every day. Now as a consumer I am more likely to take a chance and go out to dinner.”