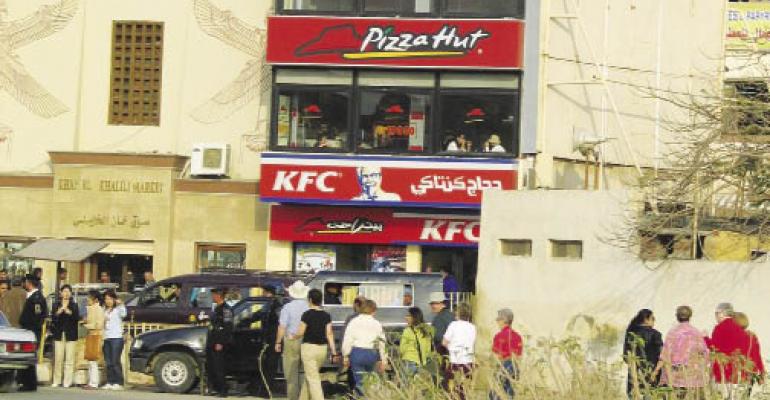 For more than a decade, U.S. restaurant companies have cast their expansion gaze toward the so-called BRIC nations of Brazil, Russia, India and China. And more recently, the Middle East has sparked intense development interest.

Now a new acronym is entering the lexicon of expansion-minded operators: CIVETS.

“We are determined to make Carl’s Jr. the leading QSR brand in Jakarta and have aggressive growth plans for Indonesia,” said Henry Kwan of developer PT Fortune Food International, a subsidiary of the PT Aneka Makmur Sejahtera holding company.

“We have an aggressive development plan to open 25 Carl’s Jr. restaurants and are excited to launch Carl’s Jr. in Indonesia with our great partner, CKE Restaurants.”

CKE has also signed a development agreement with Mesa Asia Pacific Trading Services Co. to open 25 Carl’s Jr. restaurants in Vietnam over the next six years, having opened its first unit there in May.

Vietnam, also home to some Yum! Brands Inc. concepts, led a list of emerging markets beyond BRIC that was produced in a  report prepared this year by The Economist Intelligence Unit, the business information arm of The Economist Group, publisher of The Economist.

In addition, it said “the political baseline also looks supportive: There are risks, but all these countries have a good chance of remaining stable. Colombia’s long-running guerrilla conflict has held the country back, but security has improved in recent years.”

Overall, the report “expects the CIVETS to post very healthy average annual GDP growth of 4.7 percent over the next decade — below the 5.6 percent average projected for the BRICs, but well above the G-7’s likely rate of just 1.8 percent.”

The countries represented in the Group of Seven nations are Canada, France, Germany, Great Britain, Italy, Japan and the United States.

The six CIVETS nations, the report added, have large and rather young populations, diversified economies not excessively reliant on commodities, and reasonably sophisticated financial systems.

Collectively, CIVETS was forecasted to account for up to  20 percent of the G-7’s total GDP, making the nations significant global markets in their own rights, the report said.

Allen remains bullish on the Middle Eastern markets — such as Dubai, Kuwait and Saudi Arabia — for U.S. restaurant brands and is currently doing work there. Beyond BRIC  nations, “there are other untold stories of emerging markets foodservice executives should be considering,” Allen said.

The more densely populated nations are attractive, he noted.

“It is natural that big-budget Western brands will go in like an invading army and win not just a share of the growth in these markets, but also claw away share of the existing market — edging out less sophisticated and well-funded incumbent  enterprises,” Allen said.

Regarding the so-called CIVETS nations, he offered these observations:

Colombia: “This market is improving in stability, but it still lacks the growth in population and prosperity to make it a top destination for U.S. restaurant companies looking internationally,” Allen said. Colombia has about 53,000 restaurants.

Vietnam: This Southeast Asian nation has about 530,000 foodservice establishments, but 430,000 of them are street stalls, Allen said. The largest chain is a coffee company, Trung Nguyen, with more than 1,000 units. And the No. 2 chain is Highland Coffee. “It is therefore natural we will hear of Starbucks being one of the first to go after this market aggressively,” he said. KFC, a division of Yum! Brands Inc. of Louisville, Ky., has been in Vietnam for a decade and is ranked as one of the top five chains in the nation with nearly 100 units.

Egypt: By some estimates, the full-service casual-dining segment grew by as much as 24 percent last year, Allen said. Chili’s Grill & Bar and T.G.I. Friday’s have long had presences in the market, especially in Cairo. “The incomes continue to rise here due to a general boom in the Middle East markets, increases in tourism, etc.,” Allen said. And Egyptian consumers flock to branded foodservice operations, he said.

Turkey: The main cities of Istanbul and Ankara continue to draw interest from U.S. restaurant companies. Of the six CIVETS nations, Turkey has the highest gross domestic product per person — $12,740 — and a population of about 75 million.

South Africa: One drawback for this nation is that unemployment is about 24 percent, compared with 6 percent worldwide, Allen said. “The chain to watch here is Nando’s. [It is] one of the biggest restaurant chains that no one [in the United States] has ever heard of. Their corporate culture is remarkable; they are 900-plus restaurants strong; and their last untapped market is the USA.” South Africa is investing significantly and wisely in attracting new foreign companies, he added.