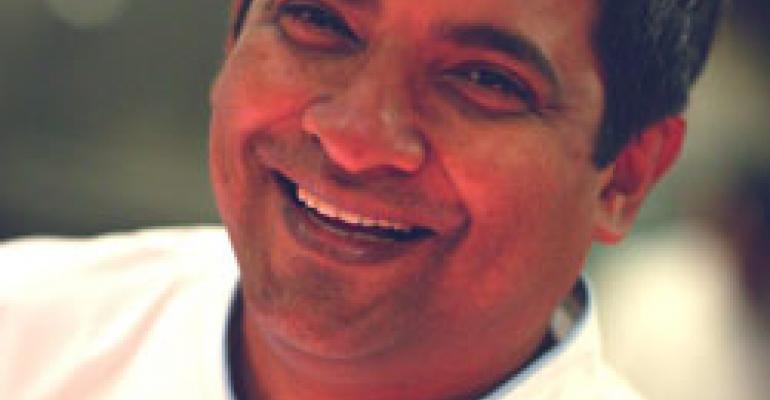 Floyd Cardoz, who has built a career on cooking Asian-accented French food, is changing his style.

After spending the past 12 years as executive chef of Tabla, a French-Indian restaurant in New York that Danny Meyer’s Union Square Hospitality Group closed last year, Cardoz is now getting ready to take the helm of the group’s next fine-dining restaurant, North End Grill.

The new restaurant is slated to open later this year in the Conrad New York Hotel in Manhattan’s Battery Park City neighborhood. It will feature local, seasonal food, including what USHG has termed “roof-to-table cuisine,” as the hotel will have a rooftop garden.

Cardoz began his culinary career in his hometown of Mumbai, India, where he attended culinary school and interned at the Taj Mahal Intercontinental Hotel. He then attended Les Roches hotel management and culinary school in Switzerland before moving to New York and working for seven years under chef Gray Kunz at Lespinasse.

What do you have in mind when it comes to the cuisine at North End Grill?

It’s going to be very ingredient driven. Seafood will be about 60 percent of the menu, but we want to keep it as local possible, maybe seafood just from the East Coast unless we get something extraordinary from the West Coast. I think New York has the best striped bass, so we’ll definitely do that when it’s in season.

Will the food be a big departure from what you did at Tabla?

Definitely. At Tabla we were also extremely seasonal, but we tended to have a little more spiciness. I wouldn’t say that North End Grill’s food will be very spice-forward. I guess I will always be known for Tabla’s style of food, but I will steer away from that. North End Grill will really celebrate being near the Hudson River and the bounty of New York.

What plans do you have for the roof garden?

I firmly believe that keeping things as local as possible is the way that we should eat, and if we have the resources to do it, we should. I’m an avid gardener at home, and I’m looking forward to seeing what the area [on the roof] is like. The conception of the roof is going on now, and we will get things going there in June and July. We did as much local sourcing as possible at Tabla, too. We also did composting, and I hope to do that at North End Grill.

What produce in particular do you think benefits from being freshly picked just before being served?

Tomatoes, cucumbers, and there’s nothing like having fresh lettuces. They always have such great aroma and flavor when you pick them fresh. And garlic. We’re not going to limit ourselves. We’re going to see what we can grow and grow as much as we can. We might stay away from beets and potatoes, but we’ll try to grow radishes, kohlrabi, cabbages and berries.

What sort of beverage program do you have in mind?

We’re going to have a great coffee program like we always do. We’ll have four to six beers on tap, and we’re talking about scotches. The company has some really good single-barrel and other fine scotches, so we’re thinking of having a nice scotch bar. We’re very excited about that.