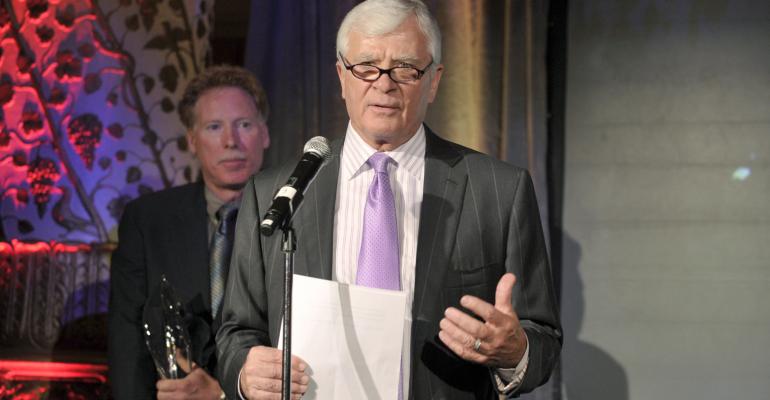 “Culinary arts is a mix of art, science and commerce that occasionally brings about greatness,” said Chris Keating, associate publisher of Nation’s Restaurant News, which joined Ventura Foods in honoring excellence in menu development during their annual MenuMasters celebration.

Nearly 400 people gathered for the event, which was held at the Drake Hotel in Chicago on May 22, during the National Restaurant Association Restaurant, Hotel-Motel Show. Prior to the awards ceremony, attendees sampled the winning fare as they networked.

Jon Luther, executive chairman at Dunkin’ Brands, was inducted into the MenuMasters Hall of Fame, joining such culinary luminaries as Wolfgang Puck and Emeril Lagasse who had been inducted in previous years.

The award for best new menu item was presented to Outback Steakhouse for its sweet glazed roast pork tenderloin. The best menu revamp went to Tropical Smoothie Café for its new line of flatbread sandwiches.

KFC was given the healthful innovations award for its rollout of Kentucky Grilled Chicken.

Burgerville won the new award of “menu trendsetter” for its innovations in using local seasonal products.

Brad Blum, chief executive of Romano’s Macaroni Grill, was declared the year’s innovator for transforming that chain into an Italian-Mediterranean restaurant, changing every menu item over the course of 15 months.

“I think the idea of celebrating the culinary arts and all that it means to this industry and this country is very, very special,” Blum said, expressing pride in his team, which helped drive quality up and costs down while reducing the number of calories in menu items by up to 50 percent.

Luther pumped his award in the air after receiving it, and said, “Not bad for a guy who can’t cook.”

As the head of Dunkin’ Brands, however, he did oversee a 50-percent increase in global systemwide sales. He also previously headed up Popeyes Louisiana Kitchen and revved up that chain’s menu options.

“It’s a thrill to stand up here on behalf of the culinarians who do it each day,” Luther said, adding that American foodservice had surpassed the French as the greatest in the world.

Many of the awardees this year pointed out that product development is a group effort and followed the example of David Woolley, Red Robin’s executive chef, who called everyone in attendance from the company on stage to accept the award.

Others spoke of the importance of periodically steering brands back on track. Tim Gannon, co-founder of Outback Steakhouse, said the award-winning pork tenderloin, with its lower food cost and price point, made the chain more in line with the current mood of consumers. The fact that the chain sold $2 million worth of them in 2009 spoke to their success, Gannon said.

Similarly, the flatbread sandwiches added by Tropical Smoothie Café resulted in a decrease in the chain’s inventory and an increase in sales. Vice president of operations Mike Rotondo said customers said they’d pay more than the $3.99 the chain charged for the sandwiches.

The celebration went into the night, and each guest received a bottle of champagne with a limited-edition print by artist Guy Buffet etched onto the bottle. n