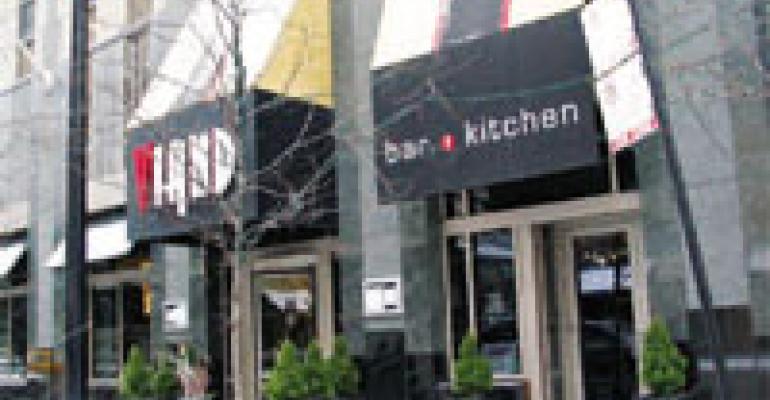 On the Menu: Viand

Although Viand is located on the street level of a Marriott Courtyard just east of the Michigan Avenue shopping corridor, it’s a far cry from a typical hotel restaurant. With chef Steven Chiappetti in charge of the food, Viand has become a neighborhood bistro frequented by local diners even more than by hotel guests.

Chiappetti, who first burst onto Chicago’s exciting restaurant scene in the late 1990s with Mango, an American Bistro, won many national and local accolades as he moved through a series of restaurants. After taking a three-year sabbatical from the industry, he’s back with a vengeance.

His followers note that he has reintroduced his signature, sometimes whimsical style into Viand, an approach he recently showed off at the James Beard House in New York and on the Today show.

“Our food is more fun and interactive, with a lot of tableside preparations of specials, especially on slower weeknights,” Chiappetti explains. Some of his signature dishes are playful gourmet items, such as smoked Gouda and corn lollipops and his dessert Junk Food Cart, served in a miniature shopping cart.

For his whimsical appetizer of smoked Gouda and corn lollipops he makes a ball of corn maize, grated Gouda and a little warm water, then briefly deep-fries it and puts it on a stick. It’s served warm so that the cheese is soft when the diner bites into the “lollipop.”

One of his favorite soups is a roasted garlic and tomato soup with goat cheesesmeared croutons. The main ingredients are oven-roasted garlic, basil and fresh tomatoes, which typically come from Mexico in the winter. He spreads soft goat cheese on croutons, which melts in the soup as it’s consumed. The goat cheese adds a sourness and texture to the acidity of the tomatoes, he explains.

Having grown up around his family’s slaughterhouse and packing house businesses, Chiappetti’s involvement with food began at an early age. His cuisine is a combination of formal training and hands-on experience.

He draws on the world’s culinary bounty, saying that he does not buy into the “locavore” philosophy of some of today’s chefs, who tout the nearly exclusive use of regionally produced foods.

“It’s a global market. We still import a lot of things,” he says.

The printed menu itself conveys a sense of humor in the labels on the sections, which are “from the water,” “from the land,” “from the farm” and “from the sky” —the last one for fowl.

The “from the farm” section always includes lamb. The current menu features lamb shank, which is braised for several hours, wrapped in lamb pâté and put back in the oven. It’s served with reduced juices, lentils and creamed leeks.

“From the sea” includes a sole fillet wrapped around a miniature lobster soufflé and topped with hollandaise sauce. The chef also likes to work with sturgeon, which he characterizes as an underutilized fish. His current preparation is to crust it with onions and serve it on acorn squash purée with sautéed pine nuts and brown butter sauce.

Chiappetti also has fun with desserts, especially his “Junk Food Cart” which usually contains an assortment of treats he enjoyed as a child and has upgraded by making them from scratch: house-made Twinkies, assorted cookies, doublefudge brownies, Oreos and Coke floats.

Other desserts that evoke childhood memories include a banana s’more, a chocolate brownie topped with caramelized bananas and toasted marshmallow, as well as a “huge ice cream cone” consisting of five scoops of ice cream in various flavors, vanilla mousse and, of course, chocolate sauce.

He and his staff also serve hotel guests with room service and breakfast. He switches into “fun” mode again at lunch time, when occasional promotions feature foods like a choice of 10 half-pound dry-aged sirloin burgers for $5 each.