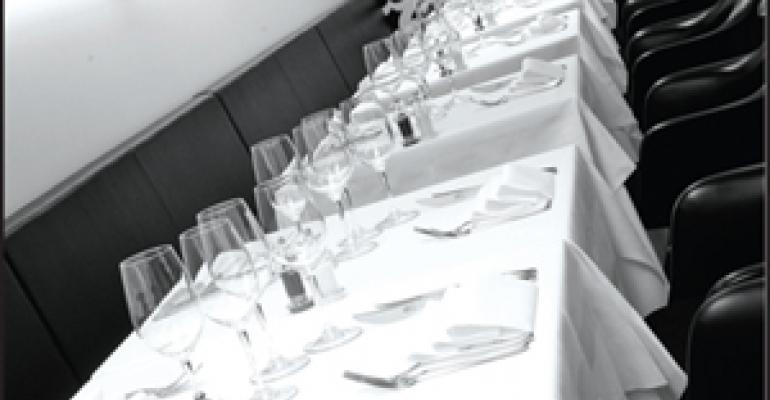 On the Menu: Vanilla

“Some people say vanilla is boring,” says Matthieu Destandau, restaurant director of Vanilla, a recent arrival on the London restaurant scene. “But who doesn’t like vanilla? It’s a default flavor, but it can be quite exotic.”

Destandau collaborated on the newly launched restaurant, which is owner David Alberto’s first foodservice enterprise. Destandau, who has worked in catering since he was 16, oversaw the design, working with architects on the lighting, decor and even the white resin flooring.

“The risk was enormous,” Destandau says. “Half a million pounds [about $1 million]. For someone to put that kind of trust in me, with no experience in design, is enormous. All my experience is in catering. I’ve known David for two and a half years, but it is still big for him to trust me with that kind of money.”

Vanilla is “sleek and chic, with a retro-futuristic interior,” according to the London edition of DailyCandy. The bar is white with intimate banquettes separated by soft, white curtains and illuminated by chandeliers of falling glass. It has a distinctly feminine appeal, which sets it apart from the city’s gentlemen’s clubs.

The primarily black and white dining room is reminiscent of the black color of a vanilla bean and the white vanilla flower, Destandau notes. The rectangular space has an almost art deco feel.

French chef Marion David’s menu, which features vanilla in numerous dishes, was inspired by the restaurant’s name and the distinctive black-and-white decor.

“It’s an obligation for me to play with that,” she says. And she is artistic in her interpretations: The signature dishes are black and white, with hints of vanilla in the flavor.

“The restaurant is very elegant for a man,” she says. “But it’s also feminine. I wanted dishes that were refined with a certain delicacy; it’s why I use a lot of flowers. I like working with delicate flavors, like flowers and spices, gently bringing out the flavors in harmony with the atmosphere. It’s about teasing the senses—not too much, but just enough.”

“It’s great to have a woman designing the menu because she really understands what women want,” Destandau says. “There are plenty of men’s clubs. This is meant to draw women.”

The menu emphasizes seasonal products, he adds, citing the rack of lamb with sautéed edamame as evocative of the greenness and freshness of summer. In winter they plan to serve richer foods that are deeper in color, like root vegetables.

“I love marrying the flavors of wood with those of the sea,” David explains. “I find that very delicate. I like working with opposite flavors. I try also to mix meat and fish. I cook guinea fowl with jumbo prawns in coconut milk.”

Another out-of-the-ordinary combination is the foie gras, which is served on a rhubarb tart with a mizuna and dandelion salad. The acidity of the rhubarb and the salad offsets the fatness of the foie gras. They also add sweetness and sharpness to the dish. The combination is lighter than most classic French foie gras dishes.

For dessert, there is a chocolate and jasmine fondant served with olive oil ice cream that includes vanilla. Destandau calls the ice cream “a dream.”

The cocktail menu was created by Xenios Voniatis, formerly of New York’s Milk and Honey. Voniatis returned to London a year and a half ago and has seen a lot of improvements in the cocktail culture, he says.

“It’s difficult for cocktail bars to compete with the pubs,” he says. “It’s not easy to convince the English to switch from beer to cocktails. But the cocktail bars have been picking up. It’s the new fashion.”

Voniatis uses only fresh juices, nothing out of a carton. Fresh apple, orange and pineapple juices are available, but there’s no cranberry. Making one cocktail at a time, he says he treats his work as a liquid culinary art.

While they position themselves as an elegantly relaxed haven from binge-drinkers and pick-up scenes, they are also making a play for business clientele with their private dining room and members’ club card benefits.

Vanilla is housed on the ground floor of a building that Alberto’s company Avanta owns. Above the restaurant he rents fully served, furnished offices. Along with office assistance, tenants are offered complimentary memberships to Vanilla, which generally costs £150, or about $300.

“We are trying to create value for money in a discrete environment,” Destandau says. “When I think of going out in London, I think you can have fun, but at the end of the night the bill can change that. We’re exclusive because we’re small, but we want anyone to feel that they can come, regardless of personal means. I mean, don’t get me wrong, it’s not cheap, but it’s good value for money in the London market.”

Feuilleté of halibut with green asparagus, caramelized cèpes and a Chablis emulsion