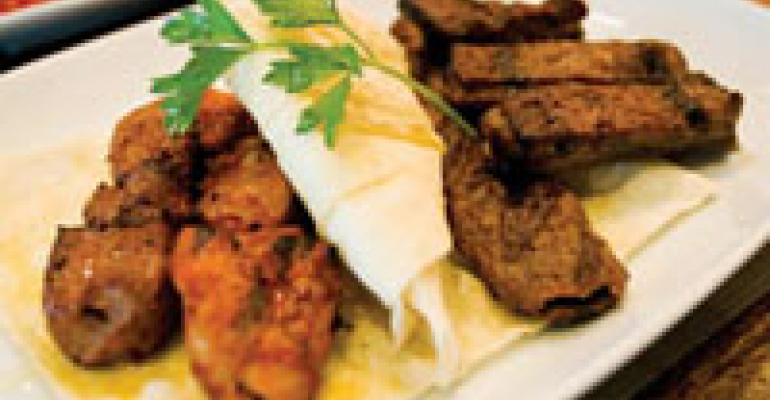 ON THE MENU: Pera Mediterranean Brasserie

What do you get when you combine a former financier with no foodservice background, an ex-general manager and the former chef de cuisine of a luxury hotel?

The answer is Pera, a 175-seat upscale Mediterranean brasserie specializing in grilled meats and seafood dishes that showcase the flavors of Turkish cuisine.

Named for an elegant neighborhood in Istanbul, Pera, which partners Cem Erenler and Burak Karaçam opened in 2006, is located in another refined neighborhood—New York’s Madison Avenue. Its customer base is composed not only of area business-people, but also young and trendy folks, somewhat surprising for an area not typically known for its youthful exuberance.

So what keeps the crowds coming back for more? Erenler, a native of Turkey who for 26 years toiled as a foodservice general manager at such deluxe properties as the Four Seasons and the Regent Wall Street, says it’s the authenticity of the food and the theatrical atmosphere in which it is presented.

Enter co-executive chefs Jason Avery and Turkey native Sezai Celikbas, who have worked together to create dishes from the areas Pera represents, each with a modern twist.

“We wanted to create a concept unique to the U.S. market,” Erenler says. “I like to describe our cuisine as the Mediterranean answer to an American steakhouse. You know if you ask anyone what comes to mind when they think of Mediterranean food, they’ll tell you pasta or vegetable dishes. But we feel that the true cuisine has been forgotten and not represented properly. That’s why we decided to focus on eastern Mediterranean food with an emphasis on Turkish grilled meats and seafood.”

As a result, guests dine on such dishes as warm hummus, beef and bulgur tartare, filet mignon wrapped in air-cured pastirma, and fresh-baked lavash and flat breads, which are topped with eggplant, ground beef, or soujouk, a spiced Turkish sausage. And then there are the grilled meats, including lamb, chicken and beef that are cooked on an open-flame grill that faces the dining room.

“My partner’s father grew up in the city of Adana in southwest Turkey,” Erenler says. “So he was always looking for someone who got this cuisine right, which simply was called kebabs by the Lebanese and Turks. Finally he found a chef who helped him bring it to other restaurants in Turkey. That chef’s son is Sezai, who trained Jason in the preparations and specifications of the food. He also took him to farmers markets in Turkey, explained about the different spices, vegetables and meats, and really gave him a crash course in our ethnic food.”

Avery says the trip to Turkey was an invaluable experience that helped him better understand the cuisine and the spices associated with it.

“That trip we went on was a culinary reconnaissance mission, so to speak,” he says. “We went from the bazaar, where we saw all the dried, butchered meats and nuts, grains, vegetables and cured sausages—everything—to a lot of the classic restaurants. We went into kitchens and out to eat excessively, and that’s how we brought back the core of our menu. The meze—like the hummus and stuffed breads—were added around [that core] and featured a New York flair while still keeping true to the flavors and textures of the items of Turkey.”

To do that, the restaurant every other month imports spices, like Marash red chile peppers and sumac, as well as tulum, a tangy, fetalike cheese, from Turkey.

“The Turkish tulum we use is from one small city in eastern Turkey called Erzincan, where my mother lives,” he says. “She surprised us with it one day, and we’ve been using it ever since. Her other big contribution is the unbelievable jams she makes—they’re strawberry, sour cherry, apricot and quince. She sends them to me every two months and I reduce them down to syrup and use them in our signature cocktails.”

Erenler adds that it was most important to him and his partner that executive chef Avery stick to a traditional core menu.

“I don’t believe so much in fusion, such as the kind you find in Asian food that has French influences,” he says. “That influence takes over the flavor of the main cuisine and confuses the guests’ minds. They need to know what the core is, and here at Pera it is grilled meats.

The meze, which also are known as small plates or appetizers, range in price from $9 to $19 and entrées are priced between $18 and $38. In addition, the restaurant features the Pera Tradition, a chef’s tasting menu of meze and meat specialties for the table, served family-style and priced at $47 per person.

One specialty, the lamb Adana, is butchered on site with a pala knife that is shaped like a half-moon. Erenler says pala knives originally were used as swords in the Ottoman Empire. Here, however, they are used to chop the meat instead of putting it through a grinder. The process, he says, takes about 35 minutes.

“It creates a different texture,” he says, “and turns people into lamb lovers.”

Perhaps Avery’s biggest contribution to Pera, Erenler says, is his emphasis on presentation.

“When you look at food, its components should be seen on the plate,” he says. “Jason has really spent so much time finding the right way to present this food, and it adds to the overall experience.”