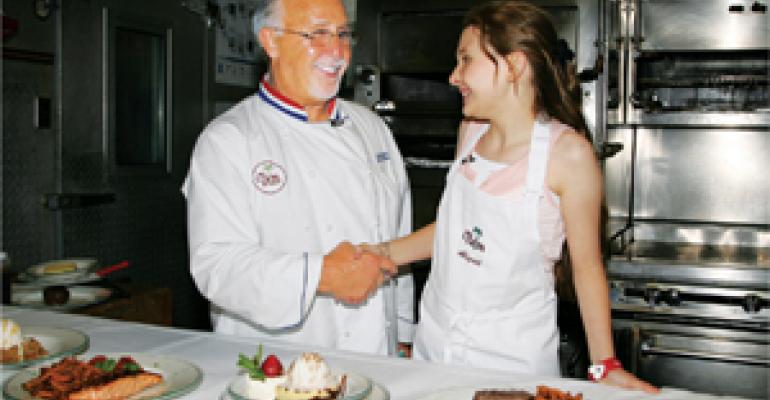 On the Menu: The Palm

The Palm steakhouse chain has taken inspiration from both the summer season and a recent film release to craft two first-time promotional menus.

In a tie-in with the movie “No Reservations,” the 27-unit steakhouse chain has developed an inaugural children’s menu that draws on the input of co-star Abigail Breslin, the 11-year-old actress who also was nominated for an Oscar for her work in the film “Little Miss Sunshine.”

At the same time, The Palm is offering a number of lighter accompaniments for its traditional Palm Summer Menu extravaganza, which features new appetizers, salads, side dishes and desserts.

The new summer menu promotions began with the restaurants’ popular lobster-for-two promotion, now in its sixth year. During the months of June and July, guests were able to order a 4-pound jumbo Nova Scotia lobster, split for two, for $90. Customers also had the option to increase the size of the lobster order—five pounds for $105 or six pounds for $125.

While Tammero and his team were responsible for devising the new summer menus, Breslin helped produce The Palm’s first children’s menu. She worked with Tammero on the eight-item menu, which was launched July 24 at participating locations.

Tammero says Breslin visited the West Side Palm in New York with her parents and talked with him about the kinds of dishes she liked. “She said she liked her mom’s macaroni and cheese,” he says. “She also liked sweet potato fries. So we created two new dishes for her.”

Over the six-year life of the summer lobster promotion, The Palm has sold more than a million pounds of lobster, corporate executive chef Tony Tammero says.

However, during August and September The Palm has added a second two-for-$90 summer promotion that features a combination of Alaskan king crab legs and a 16-ounce USDA Prime Italian marinated skirt steak.

Tammero says he and his staff began working on the accompaniments for the menu last December, finally testing the new recipes in four restaurants for three months. “We were able to decide which items we liked the best and which sold the best,” he says.

The menu also includes four seasonal cocktails, including strawberry mint lemonade, a watermelon mojito, and a white cosmopolitan for $12. A raspberry margarita sells for $13.50.

“It was an absolute pleasure to work with Abigail, who is a tremendous young talent, both on screen and in the kitchen,” Tammero adds.

Although the children’s menu is expected to be available for only a limited amount of time, Goldman says The Palm might keep it if it turns out to be popular.

chef’s preparation of the day

Served family-style for two or more

with bacon and shallots

This menu is inspired by Warner Bros. Pictures’ summer release “No Reservations” and was created by the film’s co-star Abigail Breslin along with Palm executive chef Tony Tammero