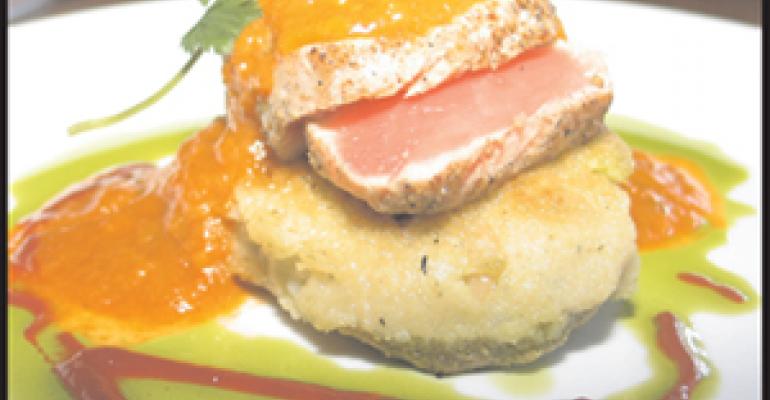 ON THE MENU: Limón Denver

After immersing himself in the rich range of foods of Peru while visiting missionary friends, Denver chef and restaurateur Alex Gurevich decided his customers back home were ready for novoandina cuisine.

His hunch paid off. Gurevich opened Limón, an eclectic Peruvian lounge, last summer along 17th Avenue in uptown Denver. The 60-seat restaurant was wildly successful from its opening day, with two- and three-hour waits for a table in the rustically designed space. Limón was operating in the black after its first week.

The learning curve for Limón customers has been short and sweet, and often spicy.

“There’s a lot going on in a single plate,” says Gurevich, who was born in Russia but grew up in Denver.

Peruvian cooking, one of the more diverse cuisines in the world, with European, Asian and African influences, has undergone a renaissance of sorts since the early 1990s. The movement, novoandina, or New Andean, involves adding contemporary touches to traditional, native dishes and ingredients.

Although the names of the dishes may sound foreign—lomo saltado, arroz con pato or causa—the food is not totally foreign to American diners: wok-fried beef tenderloin, crispy duck confit over cilantro flavored rice, and potato cakes.

Novoandina gives Gurevich the freedom to put his own interpretation on traditional Peruvian fare.

“It shouldn’t be peasant food,” he says. “It should make a ‘wow’ statement on the plate.”

For the traditional causa, Gurevich stuffs a potato cake with cured tuna loin, garlic oil and salsa. The causa solterito is stuffed with fava beans, beets and basil and served on a cheese salad.

Gurevich also uses ahi tuna for the atun con tacu tacu y aguaymanto dish. Rolled in black pepper and orange-zest, the tuna is seared and served with a lentil and rice cake and a yellow chile and cape gooseberry sauce.

For the ceviche Gurevich keeps it more traditional with the tiradito, raw Pacific bass marinated in red onion, cilantro and lime juice.

“Peruvian cuisine gives you the ability to do so much, with not only the infusion of so many different cultures, but the list of ingredients—over 120 chiles and over 40 varieties of potatoes, 80 corns—is all just amazing,” says Gurevich, a graduate of The Culinary Institute of America in Hyde Park, N.Y., who trained in Russia, France and Italy.

Gurevich also owns Café Bisque in Lakewood, Colo., a five-year old New American eatery that serves breakfast, brunch and lunch. Before opening Limón, he spent two months training his staff from both restaurants on Peruvian cuisine and the novoandina style of cooking. The training gave his cooks a chance to expand their knowledge and skills, he says.

“Peruvian cooking was different because they had to first read the books in the first week to understand what it is all about and what the culture is all about,” Gurevich says.

The greatest challenge has been getting native Peruvian ingredients to Colorado, such as dried Peruvian chiles. His food costs run just under 30 percent.

“We’re relying on an importer to bring it in, but it’s a different country, different set of rules,” Gurevich says. “In the beginning, I didn’t know what it was going to cost us. We’ve had to bring some things in jars, or frozen. But I don’t think it hides the flavors or plays them down as much as I thought it would.”

Fortunately some ingredients are available in the United States. Rice, potatoes, cilantro and fresh, high-quality seafood are easy to obtain. For what he can’t get, he improvises. The limón, the citrus fruit and the restaurant’s namesake, is unavailable, so for ceviche, he uses a mix of lemon, lime and key lime to get the right flavor profile.

The cocktail menu also reflects the novoandina style as well as such traditional Peruvian drinks as the pisco sour, which includes fresh lime juice and whipped egg whites. General manager and bartender Patrick Thomas serves drinks filled with fruit and juices, such as gin infused with cucumber, muddled lime, mint and a little sugar; a mojito of pineapple rum with muddled basil, lime juice, sugar and sparkling water; and a banana and coconut rum drink with chocolate and milk served on the rocks.

The lounge has been an important part of Limón’s success, giving the restaurant a liveliness that extends into the open dining room, Gurevich says. Customers can get a full menu at the bar or at the cushion stools and curved chairs in the lounge.

The restaurant’s honeymoon with customers lasted until Labor Day, and then demand slowed with the onset of an early winter and record-breaking snowfall. However, Limón still turns away 70 or more people on busy nights, so Gurevich is forging ahead with expansion plans. He has leased the space next door to double the size of the dining room and plans to add a 20-seat private room by April.

“It’s been the overall energy—the great customer service, great drinks, great ambiance and great food—I think, that is what the equation is all about,” Gurevich says. “Ultimately you learn you are in the hospitality business. It’s not necessarily one thing or another. You have to have that open heart.”