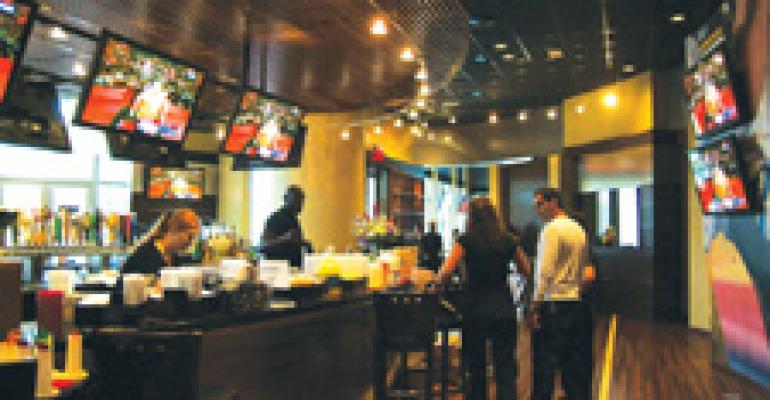 On the Menu: Jerome Bettis’ Grille 36

After leading his team to a Super Bowl victory in 2006, former Pittsburgh Steeler Jerome Bettis is tackling the foodservice industry as the face of a new restaurant, Jerome Bettis’ Grille 36 in Pittsburgh.

Designed to celebrate the career of the No. 5 all-time rusher in the National Football League, the eatery occupies 8,500 square feet in the North Shore on the Heinz Field side of the Del Monte Building. The restaurant had its grand opening June 5.

Jerome Bettis’ Grille 36 will be the latest edition to the rising North Shore area, placed directly between Heinz Field and PNC Park, the respective home stadiums of the Steelers and the Pittsburgh Pirates. The restaurant will receive competition from other eateries including McFadden’s Restaurant and Saloon, Hyde Park Steakhouse, and Calico Jacks Cantina. The North Shore area also recently became the headquarters of Fox Sports Network.

“Through our success and the way we execute operationally, Eddie was more than willing to recommend us to Jerome to do the project in Pittsburgh,” says Bob McCarthy, vice president of concept development at Celebrity Ventures Inc. The restaurant opened with an initial investment of $350,000 and features a vast array of modern, state-of-the-art audio-visual presentations, including 47 high-definition televisions featuring up to 12 different sporting events at any given time, McCarthy says.

The grill, however, is not to be mistaken as a sports bar, says Bettis, who wants to maintain a family-friendly environment that he feels is not attainable in a bar. The former running back has stated, when the project was originally conceived, that the restaurant “is focused on fantastic food and an exciting environment that celebrates football in Pittsburgh.”

The number 36, which Bettis wore during his decadelong tenure as the running back for the Steelers, will play heavily into the promotion of the restaurant. In addition to the memorabilia from the Steelers and Bettis’ alma matter, Notre Dame, that features his number, the concept features 36 bottled beers, wines and martini selections.

Those with a hearty appetite, may also order “The 36,” a 36-ounce New York strip steak topped with mushrooms and onions, served with garlic mashed potatoes and asparagus. The dish is $49.95.

Other signature Pittsburgh-theme items include Jerome’s Half-Pound Angus Burger and the Pittsburgh Steak Salad, served with marinated skirt steak, iceberg and romaine lettuce, topped with Cheddar-Jack cheese and onion rings. They are priced at $7.95 and $12.95, respectively. For dessert, patrons can enjoy the carrot cake; a onepound serving that is baked in-house with carrots and pineapple and layered with cream cheese for $8.95.

The restaurant is finding much success with typical sports-restaurant items, as well as some atypical fare, says Michael Duganier, general manager of Jerome Bettis’ Grille 36. Sports fans can feast during the game on comfort foods including popcorn shrimp and barbecue bacon burgers, but more upscale items also have sold well, including blackened ahi tuna and black and gold lobster ravioli, tossed in a sherry- and-lemon cream sauce, and served with fried leeks and red peppers, Duganier says.

After its inaugural months of business, McCarthy states that its current sales are “phenomenal,” and are on track to hit $7 million annually.

Ultimate Mac and Cheese 13.95 A blend of four cheeses, bacon, tomatoes, and cavatappi with a crispy gratin topping

Sweet cheese and cold water lobster-stuffed raviolis, tossed in a sherry and lemon cream sauce with basil oil, and finished with fried leeks and red peppers

House-made with croissants, oatmeal, and raisins, topped with whipped cream and caramel glaze

One Pound of Towering Carrot Cake (for two) 8.95