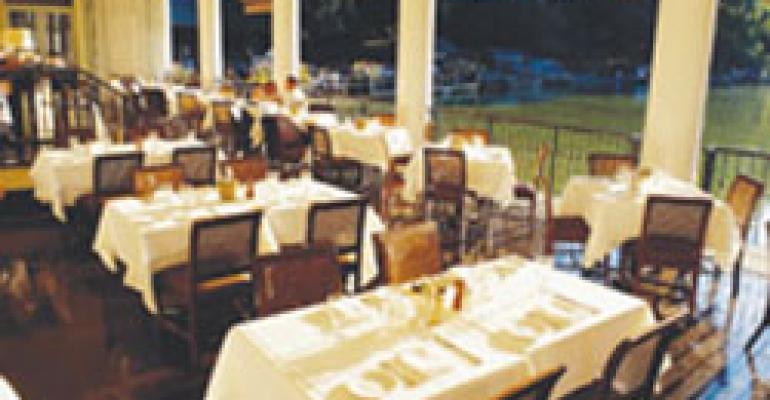 On the Menu: Central Park Boathouse

Long Island restaurateur Dean Poll wasn’t looking to open a place in Manhattan in 1999. But when he heard the New York City Parks Department was putting the landmark Central Park Boathouse up for bid, he decided to take a look at the site anyway.

“I parked on Fifth Avenue and 72nd Street at the park entrance,” Poll says. “I had no idea where I was going. Then I walked into the park and saw it on the water, and I was gaga. I couldn’t believe it. It was so unique—this tranquility in the middle of the city.”

While it might have been love at first sight, Poll knew that if he won the bid to take over foodservice operations for the Loeb Boathouse, he’d have his work cut out for him.

“It was a mess,” he says of the building, which is located on the northeastern tip of the Central Park Lake. “There was no air conditioning, no heat. The kitchen in back was literally in ship containers.”

As it turned out, Poll did win the bid and proceeded to embark on the “tremendous undertaking” of establishing the Boathouse as a serious, year-round restaurant.

“We rebuilt the whole place,” he says. “It was a real engineering feat.”

In fact, part of the restaurant is built over the lake.

Poll says he spent $1 million alone to bring additional electricity into the building, which also proved to be a challenge given the restrictions connected with operating a business in Central Park.

By the time he was done, Poll, who also owns and operates River Bay in Williston Park on Long Island, spent $8.5 million to rebuild the structure.

However, he says, the investment paid off. Today, the Boathouse generates $19 million in sales annually. Poll says that 40 percent is generated by the 150-seat restaurant, which overlooks the northeastern tip of the Lake. An equal percentage is derived from banquet business, and the remaining 20 percent comes from the operation’s fast-food outlet and boat and bicycle rentals.

The menu for the full-service restaurant is straightforward, he says, because the small 450-square-foot kitchen must be able to serve an average of 400 lunches and 300 dinners each day. On weekends the lunch numbers rise to 700.

“For the size of the kitchen, I think we have a pretty ambitious menu,” he says.

The structure’s lack of storage space also restricts the menu somewhat, Poll explains, noting that some items are stored in trailers in the parking lot.

“We have seafood delivered everyday, Monday through Friday,” Poll says.

But because the restaurant is located inside Central Park, deliveries can present problems as well, he says.

“We have storage issues,” Poll says. “We have delivery issues. It goes on and on. This is a complicated operation to run.”

Catering private parties that want the unique ambience of being in Central Park also constitutes a large portion of the Boathouse business, he explains. For example, the operations catered the cast party for the hit Meryl Streep film “Mamma Mia!”

But even as Poll admits that operating in the park is a challenge, he has set his sights on another Central Park icon: Tavern on the Green. Poll intends to bid on one of the nation’s highest-grossing restaurants when the lease expires for current operator Jennifer LeRoy.

“I think I would be a good candidate because of my knowledge of the park,” Poll says.