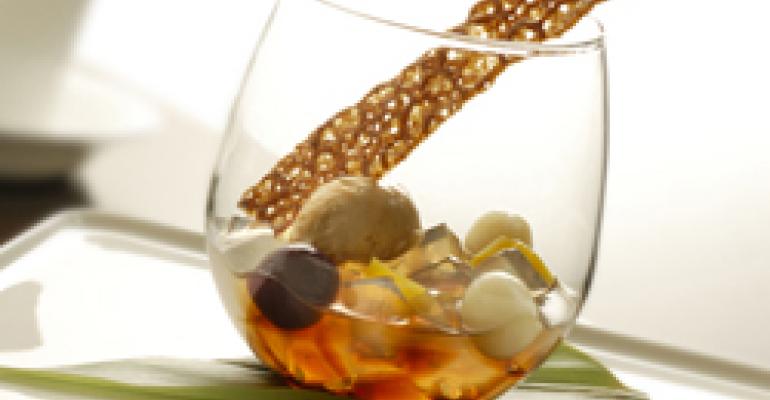 In 2005 a person may have seemed crazy to give up a banking career to open a restaurant, but it worked out well for Kyotofu owners Nicole Bermensolo and Michael Berl. The two college friends worked at JP Morgan before they decided finance was not a good fit for them and left to run Kyotofu, a modern Japanese dessert cafe in midtown Manhattan.

"There are just so many different aspects of Japanese cuisine that haven't made it over to the states," says Berl. "On one of our trips to Japan, we learned from a tofu master who had been making tofu for about 50 years, and we got really inspired to bring that idea back to the states."

They decided to take the tofu idea and create a modern Japanese-style dessert cafe. That type of restaurant is very popular in Japan but uncommon in New York.

Kyotofu's menu is heavily focused on soy and soy products, and its tofu is made in-house every day.

One signature menu item is a chocolate soufflé cupcake, which was voted New York's best cupcake by New York Magazine, and a warm mochi chocolate cake that is similar to a familiar chocolate lava cake, but instead of a molten chocolate center, the cake has a center made of mochi, which is chewy pounded glutinous rice.

"Traditional Japanese desserts are very texture focused and not necessarily flavor focused," Berl says. "There's a big movement in Japan for combining old ingredients, and that's what we do at Kyotofu. We take some more traditional ingredients and use western techniques, and Japanese techniques, to make our desserts."

Anmitsu is a traditional Japanese dessert made with agar agar, red beans and mochi. Kyotofu has an anmitsu on the menu, but its version uses agar agar and mochi that are flavored with lychee, strawberry and lavender.

"It fits a broader sort of palate," Berl says.

"We consider ourselves mainly a dessert bar," Berl explains. "Desserts are definitely our specialty."

The restaurant's proximity to Broadway helped pull in crowds, but the theatergoing clients kept asking for more non-dessert fare.

"We were constantly getting a good pre- and post-theater crowd because we're only a few blocks over from Broadway," Berl says. "And we had a lot of customers saying, 'You guys do great stuff with your desserts, we'd love to have some light, savory fare.' "

So Kyotofu has been expanding its dinner menu to let guests enjoy a light meal before or after theater with a cocktail made with shochu — a distilled Japanese liquor made with sweet potato, barley or rice. It’s about half the strength of hard alcohol, and so in many jurisdictions it can be served in restaurants that have licenses just to serve beer and wine.

To design the restaurant, architect Hiromi Tsuruta went to Japan with a list of the owners’ favorite dessert cafes to look for inspiration, and he came back with an idea inspired by old Kyoto houses and cobblestone pathways.

The entrance is paved with cobblestones along a narrow path that lets guests look into the kitchen and leads into a dining room with tall, curved walls painted matte white and surrounded with white tufted banquettes.

"The design has a sort of a warm, homey feel even though it also has that sleek minimalist thing going on," Berl says. "That warmth is accomplished with the layout and the lighting."

Because Berl and Bermensolo had no previous restaurant experience before opening Kyotofu, he says they had a very steep learning curve during the first few months.

"Neither of us had ever waited tables or anything like that," he says. "We very quickly learned that we would have to be able to do every single job in the restaurant."

Anything they could do themselves, they did.

"Some places have a marketing team and a [human resources] team and that kind of stuff when they start out," Berl says. "But we had to do it ourselves."

In addition to operating the restaurant, Kyotofu has added an online ordering system to its website and now ships its desserts around the country. It also has a growing catering business and wholesales to other restaurants around the city.

"Every time we think we're going to take a break, we wind up doing a side project," Berl says. "We have plans to open additional locations ... And in the meantime, we've been growing our wholesale business.

"Looking back, starting Kyotofu was apparently a lot less risky than if we'd stayed in the crazy world of finance,” Berl says. Now, “a bunch of our friends have been asking if maybe we can show them how to make cupcakes."