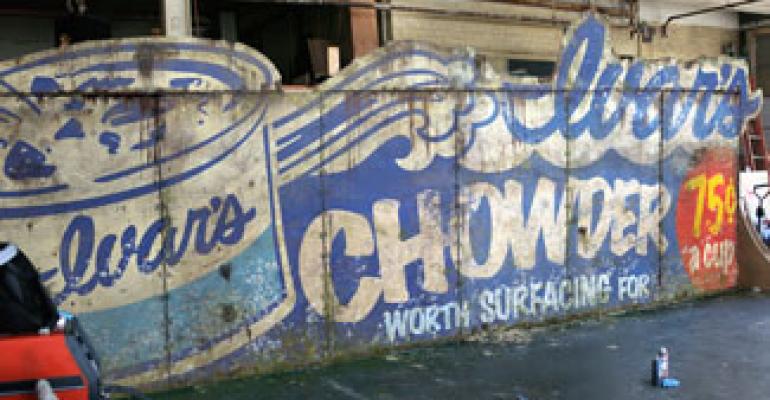 SEATTLE Sinking the hopes of anyone who wanted to believe that billboards recently pulled from Elliott Bay may have been remnants of a decades-old submarine advertising scheme by eccentric restaurateur Ivar Haglund, Ivar’s Inc. officials this week admitted the soggy signs were a promotional prank.

Seattle-based Ivar’s, which operates three dinnerhouses and 27 fast-casual seafood bars known for fish and chips, has a history of advertising and promotional silliness that stems back to its late founder, the jingle-crooning Haglund, who died in 1985.

“One goal was to see a five point gain in customer counts,” Bob Donegan, president of Ivar’s Inc., said of a motivation for the company’s advertising gambit.

“Another goal was to bring humor to the dismal fall in Seattle,” he said, pointing to seasonal bad vibes caused by the struggling local professional baseball and football franchises and “nasty political campaigns.”

The billboard-related food offers are available through Nov. 22 and include a bowl of chowder for 75 cents, which is down from the regular prices of $3.29 at the company’s seafood bars and $3.95 at its three dinnerhouses. Also being offered is a free child’s menu entree, normally priced from $4.95 to $7.25 depending on the concept visited, with the purchase of a regular entree.

Explaining results so far, Donegan said, “We have seen a doubling in sales of the cups of chowder since the campaign began, [but] not as strong redemption in the free kids’ meals portions.

“Overall,” he continued, “it looks like the campaign may be worth up to 10 points in customer counts – but there is still a month to run and all elements are still not in place, [as] some more [replica] billboards go up next week.”

The sunken signs first came to the public’s attention in late August when a salvage crew, which was in on the gag, pulled from Elliott Bay a rusting, algae-streaked and barnacle-dotted billboard advertising clam chowder at prices out of the 1950s. Two others were later pulled from Puget Sound, Ivar’s representatives said.

As word of the discovery spread, Donegan, straight faced but tongue in cheek, explained that the signs had been located using documents uncovered by a historian working on a book about Haglund. The old documents, he indicated, suggested that the underwater signs may have been Haglund’s advance work for an advertising campaign in the future when, the restaurateur suspected, regional commuters would use submarines.

From the start, Donegan said the company couldn’t be sure if the billboards were real or someone’s idea of a joke until authentication measures were completed. But in the meantime, he said, Ivar’s would honor the apparent 50-year-old deals on the signs, design and sell themed T-shirts, create and distribute replica billboards, and launch a contest using radio, TV and the Internet.

Videos of the make-believe sign salvage operation, along with information about the documents supposedly supporting the submarine advertising theory, were posted at the restaurant company’s website.

“We knew Seattle would respond to humor, and it has,” Donegan said.

Donegan said the company “gets calls, visits and e-mails daily from people who have just discovered a sign or the offers in the restaurants and love them.” For instance, he said, “We can't keep in stock the T-shirts our crews are wearing showing the submarine. Our retail store on Pier 54 and the webstore keep selling out of them.”

Though the submarine-signs campaign only officially runs through late November, “we hope the goodwill lasts through the winter,” he said.

Donegan said the campaign was planned and conceptualized over a three-month period, with the on-water video shoots lasting two days. The campaign was executed in less than two weeks, he said, thanks, in large part, to creative contributor Terry Heckler, who has worked with the company for 24 years and created its iconic TV spot, “Dances with Clams,” a spoof of Kevin Costner’s Academy Award-winning movie “Dances with Wolves.”

Jack Barrett of WackoFilms “knew us and was very effective and efficient,” and publicist Tamara Wilson aided and abetted the effort through her “good relationships with the media,” Donegan added.

All in all, Donegan indicated, the undersea marketing adventure will cost about $200,000, plus whatever product costs are tied to the food discounts.

“We bought during low cost times for TV and billboards,” he said, and “we traded [out] a lot for radio [time].”

As it stands, the Ivar’s Inc. president said, “Our business remains strong almost everywhere and unless we have a disaster in the fourth quarter, this will be among the best years in Ivar's history – Almost like we found underwater treasure.”