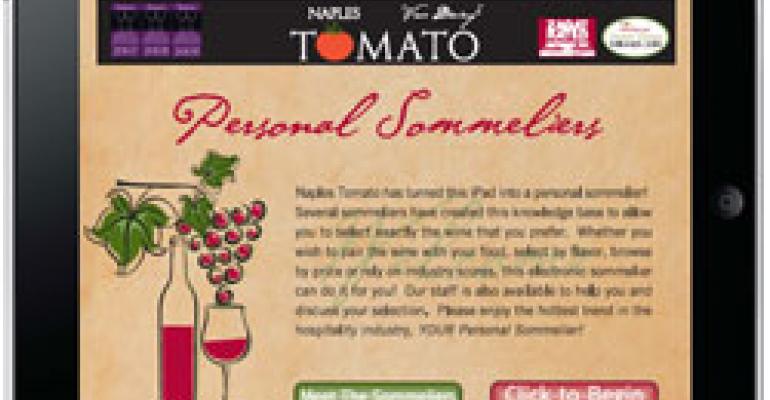 Operators use the new touch-screen tablet to boost wine sales

A few restaurants have had their wine lists on hand-held computers for years. But only with the debut of the Apple iPad last spring has the idea really taken off. Customers are now using the sleek touch-screen tablet to select bottles with the flavor profile, food affinity and price point they want. Not only is it easier and more fun to use than older digital devices, it’s a giant leap ahead of paper lists in speed and convenience. Some operators are crediting this technological advance with sparking double-digit wine sales increases.

With a 9.7-inch screen and a weight of only 1.5 pounds, the iPad is similar in size and feel to a bound wine list. When loaded with a software application, or “app” for wine list management, it puts detailed wine information and recommendations at the guest’s fingertips. A unit costs between $500 and $800. It took Apple less than a month to sell a million iPads after launching it last April. By October, it had moved nearly 7.5 million units.

At Naples Tomato in Naples, Fla., iPads loaded with the Personal Sommelier app helped increase wine sales by 16 percent in the first half of December 2010, compared to the same period a year prior without the device, reported Jack Serfass, co-founder of the Italian restaurant, which has a 550-item wine list.

“We have been getting a ‘wow’ reaction from customers,” Serfass said. “The people who use this are surprised at how easy it is.”

Serfass said the iPad makes getting wine advice much faster than waiting for a sommelier to make the rounds. On a busy night in high tourist season, the place does as many as 500 covers. Serfass has seven iPads in the dining room now and plans to use a dozen when the season begins in March.

Customers touch the screen to search by name, price, region, color, flavor profile or critics’ ratings. Another touch displays the food menu and suggests compatible wines. There are detailed tasting notes for each wine as well. Servers are nearby to discuss the recommendations, if desired, and to place the order.

Serfass, the founder of three technology companies, worked on the app with Innerbridge, a marketing application developer, and an international team of programmers. Three sommeliers provided the wine and food pairing expertise. He would not reveal the development costs, but he said that it might run between $50,000 and $75,000 to have a consultant write such a program.

David Flom, co-owner of Chicago Cut Steakhouse, said he uses 40 iPads as wine lists, and sales of his 750-item wine selection are about 20 percent higher than they were in comparable upscale steakhouses he has managed.

“I really feel the iPad is driving a lot of that increase by giving people the information and encouragement they need to order more wine,” Flom said.

Flom and his partner, Matthew Moore, both former sommeliers, provided the wine expertise for the app and a technology company called Shared Marketing Services handled the tech side. Flom estimated his total development cost for the program at about $50,000.

Flom noted that the app makes it easy to update the inventory when a wine sells out. It also obviously does away with reprinting wine list pages.

He said that South Gate’s wine sales have increased by between 5 percent and 10 percent since last July, when the restaurant introduced the iPads with the SmartCellar app, the latter developed by a tech company called Incentient.

Dufeu said the device is helping guests find wines made from varietals they like even if they are not mentioned on the label. “You can see people ordering Malbec from the southwest of France that they usually would not order,” he said.

In light of this revolution in wine selling, should a sommelier be wary of being replaced by a digital device?

Not to worry, said Gene Campbell, general manager and sommelier of Delicias Restaurant in Rancho Santa Fe, Calif. He uses the iPad and an app called i-Somm, developed by the software company that Delicias owner Owen Perry also owns, to guide guests through nearly 1,100 wines.

“Remember, you still need somms to program it and talk to people,” said Campbell. “After all, you can’t ask a computer for an opinion on Vernaccia.”