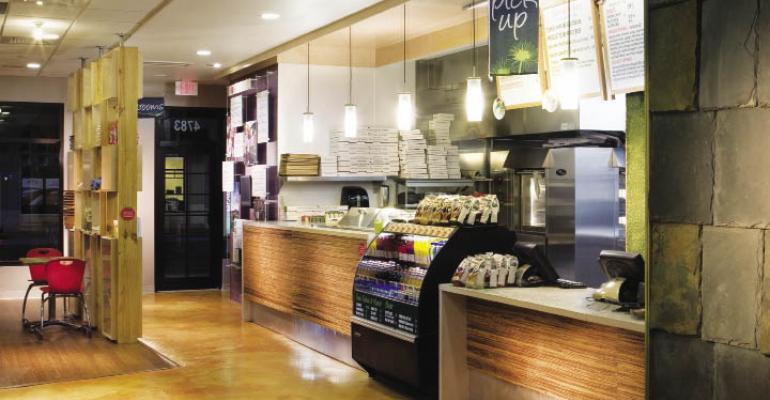 In the ultra-competitive pizza segment, Pizza Fusion has found a natural niche that officials say is ripe for growth.

Plans call for 220 stores to be open by 2015, said Begelman, a co-founder of Office Depot who served as that company’s president from 1991 to 1995 and has been at Pizza Fusion’s helm for 19 months.

While Pizza Fusion is not a national brand, it is steadily growing its reach beyond its Florida roots through franchising. Units, whose start-up costs range from $280,000 to $400,000, will open in the Carolinas, New England and California this year, Begelman said.

Pizza Fusion is not trying to steal every customer from Pizza Hut or Domino’s. Rather it has set its sights on those with dietary restrictions, such as vegans and the gluten intolerant, as well as people who might patronize Whole Foods supermarkets.

Still, cheese, pepperoni and make-your-own pizzas are the best-sellers, Begelman said, while about 15 percent of pizzas sold are vegan and gluten-free. Pizza Fusion nonetheless targets vegans through social media and store events.

“Our customers are well-educated,” he said. “They know what’s good for them.”

“What’s great about it is that it tastes like regular pizza; it doesn’t taste like hippie pizza,” Tanasychuk said, noting the pizza comes in long rectangular pies, not in the classic round shape. “What’s nice about Pizza Fusion is that you can be a parent and take your kids to Pizza Fusion and feel good about it.

Larry Feldman, a Pizza Fusion board member who also owns 1,100 Subway units, said parents are savvy about nutrition, so they’re more concerned about the quality of the restaurant food consumed by their kids than the toy that comes with the meal.

Besides aiming to serve more healthful food, Pizza Fusion wants to offer value, too, Begelman said. The average check is about $25, and specials include a $5 combo meal featuring a salad and personal pizza.

Such deals are helping to grow revenues, Begelman said. For the 12-month period ended June 30, Pizza Fusion generated $11 million in sales, up 46 percent over the prior 12-month period. Begelman noted that same-store sales were up 11 percent.

Each Pizza Fusion restaurant is also LEED, or Leadership in Energy and Environmental Design, certified. Pizza Fusion markets itself as the top green franchise in North America.

While achieving LEED certification adds about 12 percent to 15 percent to construction costs, franchisees recoup some of the costs in lower energy bills later on, Begelman said. In addition, building to LEED standards encourages the use of recycled materials. For example, a Pizza Fusion store may have a countertop made from glass recycled from other stores.

The concept’s environmental bent is not a marketing gimmick, Begelman said.

“These men were pure of heart,” he said. “When they did the concept, they had no plan to franchise. They believed in being a good social citizen, and a green business is parallel to their lifestyles. We promote delicious food at fair value. The green business is part of our makeup. We don’t brainwash anyone. We’re the real deal.”