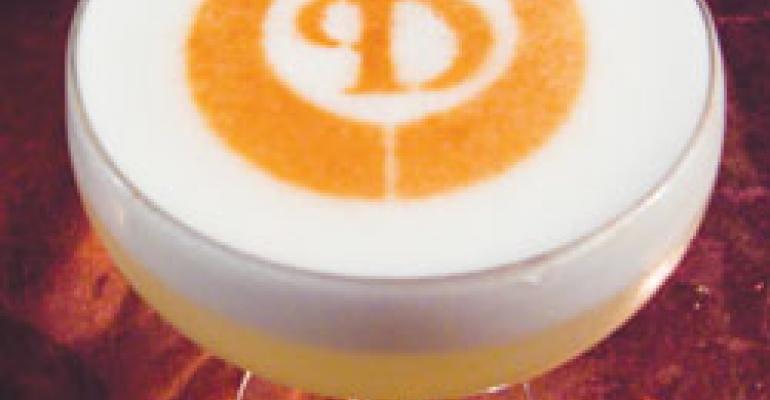 As the American cocktail scene matures, bartenders are finding all sorts of gadgets to use as they make drinks, and some of them actually serve a purpose.

“Atomizers can be pretty fabulous when used properly, I think,” says cocktail writer Gary Regan. “They can be used to coat the interior of a glass with a liqueur, for instance, and bartenders don’t waste as much product as when they rinse the glass, then discard excess.”

The theory behind spritzing a little bit of something over a cocktail isn’t new. A lemon twist is just that.

And by the 1960s, when the Martini completed its gradual transformation from a 50-50 mixture of gin and vermouth to a drink that was almost all gin, it wasn’t uncommon to use atomizers to spray tiny amounts of vermouth over the cocktails.

Atomizers are readily available in many forms and price points. Some bartenders also use olive oil sprayers. Others step into cosmetics or household good stores.

Alex Day, a beverage consultant and bartender for Death and Company, a cocktail bar in New York, uses atomizers sold by Muji, a Japanese household goods and design company, to create a lingering effect on cocktails with a variety of house-made tinctures and bitters.

The Atlantic Ruin 2, a drink he created for New York restaurant Allen & Delancey, is made with aged rum, Batavia Arrack, demerara sugar, Angostura bitters, an orange twist, and a house-made cocoa bean tincture sprayed over the top.

“By spreading it on top of the finished drink, it sits and lingers,” Day says. “Roasted cocoa bean is just an aromatic; it’s a mushroomy, interesting smell.”

At first, Day added dashes of the tincture to cocktails, but then he decided spraying it over the top, rather than mixing it in, would have more of the effect he was looking for.

“The chocolate bitter note floats on the edge of your nose,” Day says.

Regan was taught a trick by a German bartender in London: “If you fill an atomizer with, say, lemon oil, you can coat the exterior of a glass so that the customer gets the oils on his or her fingers, and the scent will stay with them throughout the whole drink,” he says.

Don Lee, head bartender at Momofuku in New York, says ingredients sprayed with an atomizer have the strongest effect when it comes to aroma. But they also affect a drink’s appearance and taste.

Earlier this year, Lee got attention in the cocktail world for playing up the visual aspect by creating stencil patterns to use with atomizers.

When Lee was beverage director of the New York speakeasy-style cocktail lounge PDT, he had his plastic stencils made by a local company, NYC Resistor, and sprayed PDT’s logo in Angostura bitters over the egg white foam on top of his Rust Belt cocktail.

The technique works best with drinks that have a light-colored foam on top, Lee says, and especially those with egg whites, which form a smooth, silky canvas to work with.

“It also can challenge people with what it is and make them think before they even smell or taste it,” Lee says. “If a drink is spicy, if you stencil a chile pepper on top, then they’ll know it’s spicy.”

“We’ve had more luck with olive oil sprayers or something with more pump action” on stencils, says Daniel Shoemaker, who owns Teardrop with Ted Charak.

He uses atomizers for the large catalog of house-made bitters and tinctures that are featured in drinks at Teardrop. For example, the Garden Variety, made with strawberries, balsamic vinegar, basil, cachaça, lime juice, egg whites and Benedictine, gets a spray of the lounge’s version of the historical Bokers’ Bitters.

Shoemaker says he typed in “cobalt blue atomizers” into Google and was able to purchase around 20-30 of them from the first source that popped up in his search results. He negotiated the price to just a little over a dollar for each atomizer.

“Most of the time, we are putting drops of tinctures straight into the cocktails and shaking or stirring it up, because we want it to be incorporated,” Shoemaker says. “We only spray on top when it’s not about the body, but about how the aromatics deliver.”

Sometimes Shoemaker uses fire in conjunction with atomizers to release volatile oils. With one particular rum and egg white cocktail that featured a spray of flamed cardamom tincture on top, “you get a waft of smoky caramel cardamom,” he says. “It’s an insanely easy to way to deliver those kinds of notes.”

He says that he always uses a butane lighter when igniting his tinctures, as other sources can add a chemical smell to drinks.

Morgenthaler says he was inspired by Seattle-based Canadian mixologist Jamie Boudreau, who documented on his blog how he used an atomizer and a mixture of angostura bitters and 151-proof rum mixture to light brandied cherries to garnish a rose water variation of the classic Rickey.

Morgenthaler used a Misto sprayer filled with Angostura bitters and high-proof rum to flame the top of his Pisco Sour.

He says the scorched Angostura really stood out.

“It really toasted those spices in the bitters, and it provided a nice, even thin layer of bitters all over the drink,” he says. “It was really experiential. The smell would spread kind of like Christmas spices.”

“It’s actually something we’re shy about because it’s not just about flair,” he says. “It’s a way to achieve a note very dramatically in the drink.”

At the same time, he admits that the technique is a conversation starter that sparks guests’ curiosity about other ingredients in the drinks.— [email protected]