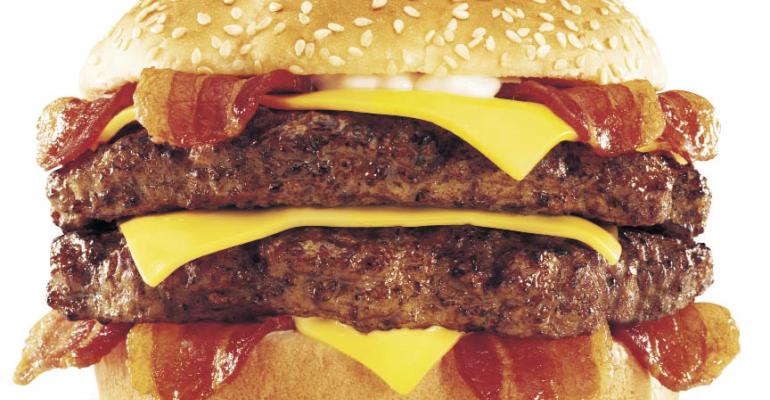 When Jamba Juice began touting its Cheeseburger Chill Smoothie and news spread of the Skinwich at KFC, even veteran industry watchers took the bait, at first believing that both the blended burger drink and a menu item made with layers of chicken skin, bacon and cheese were coming soon to a menu board near them.

And who could fault them? While both products turned out to be fictitious — Jamba was poking fun at McDonald’s for introducing smoothies, and the Skinwich was a hoax perpetrated by the blog Brain Residue that became apparent when readers pointed out the test market cities, “Ekaf, Maine” and “Eritas, Calif.,” spelled “fake” and “satire” backwards — the number of over-the-top foods proliferating on menus is quite real.

What’s more, such items are popular, according to chain officials. Consumers not only indulge in them, but they come back for more.

Strong reactions for and against several new menu items at chains like Carl’s Jr., Denny’s, Friendly’s and Sonic are popping up on blogs and TV shows, and industry executives are relishing the attention and the sales.

“Sometimes it may look like we’re developing a burger just to get attention, but that’s not the case,” Haley said. “Our overarching philosophy is to try to bring sit-down-restaurant-quality burgers to fast-food customers. That’s the starting point. After that, taste drives menu development.”

CKE is fairly confident in the flavors of its special burgers because it studies consumers’ tastes as reflected on popular independents’ menus. The Grilled Cheese Bacon Burger was “something we picked up scanning mom-and-pop burger joint menus,” Haley said. CKE found sandwiches like its Pastrami Burger at a few chains around Salt Lake City, which drove the development of that meat-as-condiment item and its sibling Philly Cheesesteak Burger.

For its latest offering, the Footlong Cheeseburger being tested at Carl’s Jr., CKE has Subway to thank.

“The footlong sub sandwiches developed by Subway and emulated by others caused a sea of change for those brands in terms of sales trends,” Haley said. “We thought we could come up with a footlong burger that’s a hot sandwich instead of a cold deli sandwich and tasted good.”

Putting the ‘eat’ in repeat

The goal for any new item, even one containing more than half a day’s worth of calories, is to spur repeat business, which industry players said depends on originality and execution.

“We try to develop burgers that can’t be found at other places — if they can, they don’t have the same power to drive trial,” Haley said. “When everybody tries to rip off the Western Bacon Cheeseburger, it doesn’t work. Second, it comes back to taste. It may be an oddball idea, but if it doesn’t taste good, it won’t drive sustainable traffic gains or sales.”

Gary Stibel, founder and chief executive of the New England Consulting Group, said that while nobody would eat a Grilled Cheese BurgerMelt every day, consumers would return to Friendly’s for such an indulgence if they enjoyed eating it.

“If you just have to try something once because it’s so unbelievable, if it’s a good experience, you’re going to do it again,” Stibel said.

“We recognize that this BurgerMelt is an indulgent treat,” McKenna wrote in an e-mail. “Many of our guests visit us frequently, and what they find is that we offer a wide variety of menu choices … But once someone has tried the Grilled Cheese BurgerMelt, it makes a lasting impression, and we’ve found that they return to enjoy it over and over again.”

A high-calorie sandwich would have limited appeal, but there are few items that everybody likes, Stibel argues. The trick is studying a restaurant’s customer segmentation and developing products sure to attract certain groups, including more adventurous diners.

“Identify those market segments worth the most money to you, and then find out where they’re feeling some pain,” meaning whether customers want items that are cheaper, more healthful or tastier, Stibel said. “Then create a compelling message so they know what you’ve got.”

He sees indulgent items as another way of executing a barbell menu strategy, only with calorie counts instead of price points. Dude food could make a restaurant a destination for many consumers, while more conventional items and healthful dishes would eliminate the veto of other guests.

“There are lots of ways to execute a barbell strategy … and it also works with calorie counts,” Stibel said. “You could have light salads complemented by indulgent, great-tasting, gotta-have-it items. There’s no reason to do it only with price.”

Fortifying menus with indulgences, healthful entrées and salads, and mainstays is important for making the industry’s counterargument when consumers or activists react negatively to one item’s nutritional content, executives said.

The answer to that criticism always has been freedom of choice, said John Dillon, vice president of marketing for Denny’s. Customers must make the right choices if they’re concerned with health, he said, but quite often they make food decisions based on what looks novel and tasty, which is why Denny’s Fried Cheese Melt has taken off.

“Consumers want to have fun with food,” Dillon said. “In this case, we took two classics and put them together. It’s an indulgence coupled with a little bit of adventure.”

The buzz surrounding the Fried Cheese Melt wasn’t forced, Dillon said, because there was no announcement of the product other than its inclusion in a story for five new items on the $2 $4 $6 $8 Value Menu. Blogs and consumer news outlets singled out the sandwich and ran with it, he said, and Denny’s soon was fielding requests to sample the Fried Cheese Melt on radio and TV stations nationwide.

“We’re trying to capitalize on that buzz,” Dillon said. “It shows the consumer appetite for what we’re offering. We made a little bit of an adjustment by offering it a few days early.”

Not all the attention was positive, however. Popular blog Gawker ran a post about the sandwich with the title “Denny’s New Fried Cheese Sandwich Is Culinary Terrorism.” Denny’s didn’t take the headline as a compliment, but the brand took solace in the comment section, where many people expressed an interest in trying the Fried Cheese Melt.

“Obviously, we monitor what’s said about us, but what we notice is that many more people on blogs or interviewed about it said, ‘I can’t wait to try it,’ than [were] expressing concern about the caloric level,” Dillon said. “They want to make their own choices. We pride ourselves on offering many menu items, and you can choose something better for you.”

The advertising doesn’t need to be as overt as putting the Fried Cheese Melt right next to the Chicken Deluxe Salad on the menu or in-store marketing, he added.

“Guests can figure that out on their own,” he said, “and they prefer it that way.”

Friendly’s CMO McKenna said the chain advertises its full array of products year-round, “so the guests may decide for themselves what’s best.”

“The Grilled Cheese BurgerMelt isn’t a controversial product, as it is just one of the many items we offer,” she said. “You’ll note that we have a number of items on our menu endorsed by HealthyDiningFinder.com,” a website that directs consumers to restaurants with more healthful offerings.

At CKE, demand for burgers drives the marketing and menu development schedules, usually resulting in one salad event per year compared with four or five burger events, Haley said.