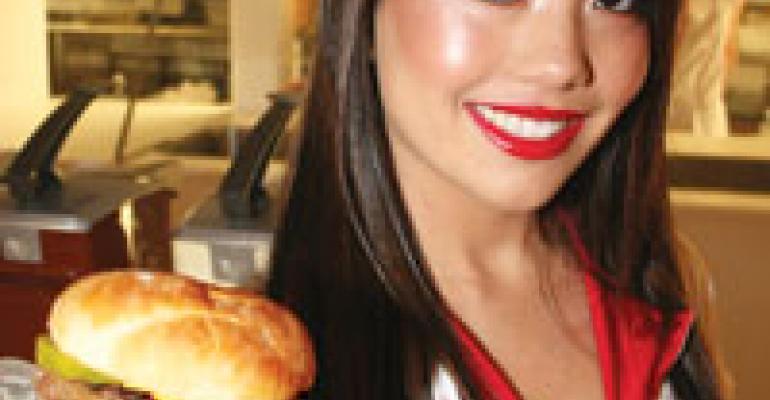 CHANDLER Ariz. Heart Attack Grill here has proven that a restaurant with a gimmick can still succeed, especially if it knows how to throw its weight—and that of its customers—around. — The

Since owner Jon Basso opened Heart Attack Grill in December 2005, it has achieved widespread publicity for its 8,000-calorie Quadruple Bypass Burger, a medical theme, and a buxom waitstaff dressed as nurses that has riled public outcry as surely as it has attracted patrons. — The

The 3,300-square-foot, 70-seat restaurant remains a popular novelty, even if the $7.38 half-pound Single Bypass Burger outsells the cardiac-arresting $13.25, 2-pound Quadruple Bypass version. Guests also clamor for the Flat-Liner Fries cooked in lard. Basso said his restaurant is “an affordable diversion” in tough economic times. — The

The website proclaims the Heart Attack Grill as “a taste worth dying for.” — The

Basso said he “used to be a nutritionist advising others on their dietary problems but found that to be a waste of time because no one listened. Now I give them better advice that they actually follow: Be happy.” — The

Offering such an indulgent menu, Basso said is “giving people what they really want…to stuff their faces and laugh about it.” — The

The menu also includes beer and liquor shots as well as cigarettes. — The

Bill S., in a post in mid-January at , said: “The atmosphere is like nowhere else.… The wife’s feathers were a little ruffled the first five minutes or so after we took our seats at the counter. But halfway through her ice-cold beer, she and the waitress started swapping waitress-working-my-way-through-grad-school stories. By the second beer, they were bosom buddies swapping men-bashing stories. This waitress was sharp. I tipped her 40 percent at the insistence of my wife.” — The

This semianonymous poster remained impressed with Basso’s business model, however, calling it “an eatery where the entrepreneur turns ground beef, potatoes and lard into CASH, using pretty much only a heat source and a spatula!” — The

Basso also has received his share of negative publicity. — The

In late 2006, the Arizona attorney general threatened to close the restaurant because of its use of the term “nurses” in referring to the waitstaff. In addition, servers “write prescriptions” rather than take orders and customers are referred to as “patients.” Nursing advocates claimed that Basso was denigrating their profession. — The

Basso, who calls himself “Dr. Jon,” cited his right to freedom of speech in defending his concept. He was arrested, however, after attempting to open a live fire hose on a group of picketing nurses. That drew the national attention of conservative media commentators such as Rush Limbaugh and Geraldo Rivera, whose coverage of the nurse-waitress dispute and the Heart Attack Grill has been broadly positive and tongue-in-cheek. — The

Basso reached a compromise with officials that called for him to put a disclaimer on his website that stated: “The use of the word ‘nurse’ above is only intended as a parody. None of the women pictured on our website actually have any medical training, nor do they attempt to provide any real medical services. It should be made clear that the Heart Attack Grill and all its employees do not offer any therapeutic treatments.” — The

Basso says much of the Heart Attack Grill’s success has been because of the entertainment value and the restaurant’s theatrics–part of the positioning that sets the grill apart from other burger spots. — The

For instance, after customers devour a quadruple burger, which also has four layers of cheese and 12 slices of bacon, they have the option of having a waitress transport them to their car in a wheelchair. — The

Basso said that about 10 customers take the restaurant up on its wheelchair offer each day. — The