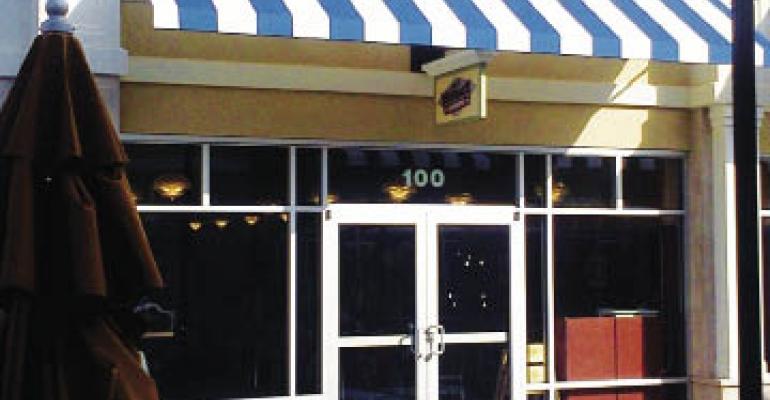 The first Jake’s Burgers was a dive opened by John Carter in 1991. Carter kept the original decor package largely intact right up to store No. 12. The homey look gave his burgers, fries and shakes chain a measure of charm, but it did little to woo the experienced restaurant partners Carter sought to grow the operation. He finally found an interested party in 2007, but the pair wasn’t immediately impressed.

“The food was really good, but the look needed some work,” said John Eucalitto, a former franchisee and area developer for Blimpie Sub Sandwiches and Edible Arrangements. Eucalitto and Edible Arrangements colleague William Chemero liked Carter and found Jake’s financials sound. “But where we saw immediate opportunities was in cost savings,” Eucalitto said. “He was paying street prices for food and had no connections to national manufacturers.”

Eucalitto and Chemero initiated a transformation two years ago that they believe has the concept poised to duke it out in the increasingly crowded better burger segment. According to data from Chicago-based research firm Technomic, gourmet burger chains were a $1.4 billion category in 2009, up 21 percent in unit count from the year earlier.

As the first step in Jake’s transformation, Eucalitto promised Carter he’d “eat at all six of his Delaware-area stores in one day to see if the food is consistent throughout and see if each could run easily as an absentee-owner business.” Several burgers and milkshakes later, he was sold, and the trio formed Jake’s Franchising LLC in 2008. Eucalitto is the company’s president, Chemero its executive vice president, and Carter remains the founder.

That same year, the chain was renamed Jake’s Wayback Burgers, and a restaurant designer was hired to modernize existing stores and develop a prototype. The new look blends a retro-diner theme with modern colors, lighting and seating. While Jake’s first unit in Newark, Del., sat 14 in a 900-square-foot space, the new inline and freestanding units range between 1,400 and 1,600 square feet and seat about 40 guests.

Purchasing and back-of-the-house operations were streamlined significantly. Since Jake’s uses fresh ground beef for its burgers, Eucalitto “was deathly afraid of that being mishandled. So we had our manufacturer pre-form them into pucks that we smash onto the griddle with a proprietary press.” Marinated grilled chicken sandwiches, turkey and veggie burgers and salads were added to the menu along with fresh potato chips.

“Opening those restaurants that fast is our biggest challenge,” Eucalitto said. Depending on locations, new stores cost $200,000 to $350,000. “But during the 15 months I was at Edible Arrangements … we opened 433 units. So doing 100 a year will be a little easier compared to that.”

All new units will be franchised, and in the United States, all are single-unit contracts. A deal to develop three stores in the United Arab Emirates, however, may be changed to a master franchisee arrangement.

“People have asked to buy territories, but we believe you need one strong operator per store,” Eucalitto said. “That may change down the road some, but only with operators who prove they can run that store really well.”

Despite sizzling competition in the fast-casual burger segment, Eucalitto believes Jake’s healthful offerings help to differentiate the concept. Patrons of all ages buy its turkey and veggie burgers, and a possible tossed-to-order salads format is under consideration. At a store in Brooklyn, N.Y., an extensive breakfast test is underway, and in units located near business centers and suburbs, online ordering accounts for as much as 15 percent of sales.

“Online ordering really does well in those markets where we deliver,” Eucalitto said. “If they order online and come to the store, they go straight to the counter, pick it up, and they’re off and running. People love it.” n