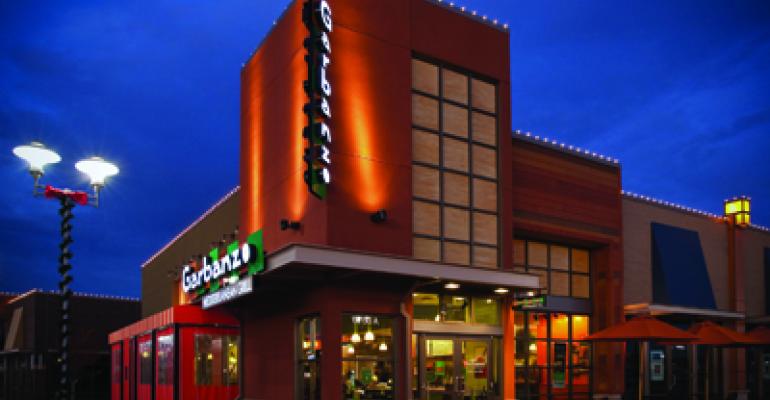 Alon Mor, Garbanzo’s chief executive, said Gemini is taking an equity stake in the restaurant chain, but he declined to characterize the investment further. The goal, he said, is to help grow the 14-unit Garbanzo brand outside its home base of Colorado.

Gemini Investors, based in Wellesley, Mass., provides investment capital to middle market businesses with revenue between $10 million and $50 million. Typically the firm invests $3 million to $8 million per transaction in either control or minority positions, Gemini said.

Gemini was part of the original round of investors in the Buffalo Wild Wings brand in 1999, staying with that company through its initial public offering in 2004. The firm also held a controlling stake in Wingstop Restaurants Inc., which it exited in 2010.

Garbanzo last year launched a franchising program with the goal of eventually becoming a national brand.

“Garbanzo is a quickly growing concept with strong franchise interest from coast to coast,” Bob Bafundo, Garbanzo’s director of operations and franchise development, said in a statement.

“We have a very big year ahead of us with our first franchise markets slated to open later in 2012 and many more on the horizon,” he added.

Founded in 2008, Garbanzo is known for its healthful and customizable menu. Guests build their meals with pita, a tortilla-like laffa or salad. Proteins include falafel, chicken or steak shwarma and toppings include Mediterranean favorites like hummus, babaganoush, tabbouleh, tahini and tzatziki.

The chain was founded by Mor, an Israeli native, along with Ken Rosenthal, founder of the St. Louis Bread Co. and Panera Bread.

Mor said the company plans to open five to 10 new locations this year, focusing primarily on the Northeast, which will also be a franchise market for the brand.

In addition, Garbanzo is in negotiations with franchisees who are looking to bring the brand to the Midwest, Texas, California and the Southeast, Mor said.

Matthew Keis, a managing director at Gemini Investors, said the firm was excited to partner with Mor and the Garbanzo team for the next stage of growth.

In addition to providing investment capital, Gemini hopes to share prior experience with rapidly growing restaurant concepts and franchisors to best position Garbanzo for the successful roll out of a franchising program, he said.

“From our first introduction to Garbanzo, we were quickly attracted to its leading position in a new niche of the broader fast-casual segment that we have long been believers in,” said Keis. “Unlike many restaurant concepts we evaluate, we were impressed that Garbanzo had built a foundation from day one to support Alon’s vision of a rapidly growing, national concept.”