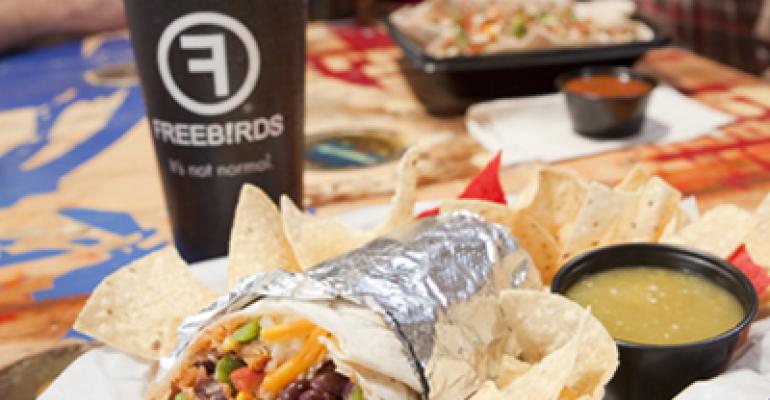 The parent company of the Freebirds World Burrito concept is launching a franchising program for the brand that is expected to get underway in the fourth quarter.

Bryan Lockwood, president of Tavistock Restaurants LLC, the Emeryville, Calif.-based parent of the 47-unit Freebirds chain, said the company is registered to franchise in 41 states and has begun accepting applications from interested franchisees.

The move is expected to further accelerate the brand’s already rapid growth since Tavistock acquired the chain in mid 2007. At the time, Freebirds had 19 units. By the end of this year, the company expects to reach 75 company-owned locations, with corporate growth focused on Texas, Oklahoma and California.

The Freebirds brand was founded in 1987 in Santa Barbara, Calif. It was originally designed for a college campus crowd, but Tavistock has tweaked the brand to broaden its appeal while trying to preserve its edgy rock-and-roll roadhouse atmosphere.

Lockwood said the company is encouraging a cult-like following for the brand, positioning Freebirds as the “Apple” compared with Chipotle Mexican Grill as “Dell.”

Chipotle, with 1,100 units, is a leader in the fast-casual Mexican category, but it does not franchise — although competitors such as Baja Fresh Mexican Grill and Qdoba Mexican Grill do.

Lockwood said Freebirds is ideal for franchising with its relatively simple build-your-own-burrito format.

He said Tavistock only is interested in working with established multi-concept franchisees who are proven operators.

Freebirds units are typically 2,100 square feet to 2,800 square feet. Opening cost estimates are not yet available and the company declined to provide sales figures.

Jeff Carl, Tavistock’s chief marketing officer, said the company is building its franchising infrastructure with additional staff to be announced.