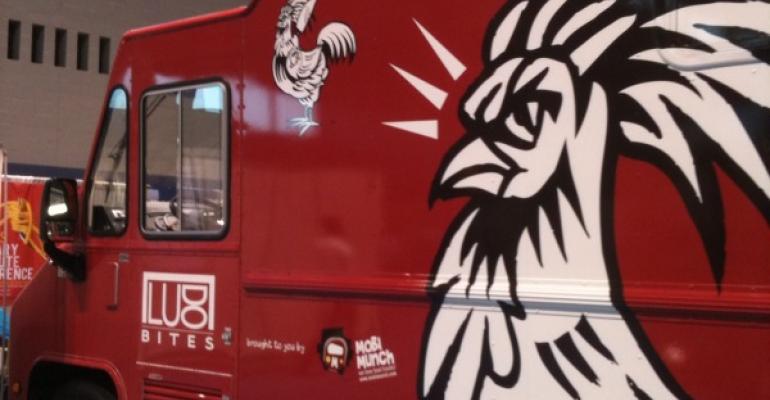 Offering another sign that the mobile cuisine trend is here to stay, a group of industry veterans at the National Restaurant Association show on Sunday are announcing the launch of a new company that aims to offer turnkey infrastructure and development planning to the growing wave of gourmet food trucks.

In addition to operating their own trucks in partnership with chefs, Mobi Munch will help others get gourmet vehicles onto the street with services that include finding the right truck, equipping and wrapping it with branded materials; linking chefs with suppliers and insurance providers, and helping operators grow their brand by franchising.

“We want to raise the level of mobile foods,” said Noveshen, president and co-founder of San Francisco-area seafood chain Pacific Catch Fresh Fish Grill and an industry consultant through his company The Culinary Edge. “We’re all entrepreneurs who are passionate about this space.”

Mobi Munch also offers a website that aims to be the national portal for food truck information — from the real-time locations for trucks in any city, to posting menus and news about special events.

The frenzy for the new generation of gourmet food trucks shows no sign of abating, with new trucks launching weekly across the country, particularly in Southern California and .

For the first time, the NRA Show in included space on its exhibit floor for food truck operators. Among them will be Mobi Munch’s first truck collaboration, featuring chef Ludovic Lefebvre who operates the Ludo Fried Chicken truck. Street-Za Pizza, the pizza sensation also has its truck present.

Lefebvre, is the former chef of high-end restaurants Bastide and L’Orangerie. French-born, he is known in for his pop-up events. Already boasting a following after a few test runs, the Ludo Fried Chicken truck’s menu attempts to elevate fried chicken with Asiatique and Provençal versions of boneless strips served with sauces such as citrus aioli and sides like honey-lavender biscuits with fleur de sel.

Lefebvre, who is scheduled to appear on a panel about the mobile food trend on Monday at the NRA Show, said in a statement that his partnership with Mobi Munch will “offer a truly revolutionary take on the food truck experience and pioneer a new class of affordable gourmet cuisine that’s free from the constraints of a permanent address and accessible to everyone.”

In June, Mobi Munch will launch a second truck concept in and called Chairman Bao, which will feature Chinese-style steamed or baked bao buns and shaved-ice drinks, Noveshen said.

Through its website, www.MobiMunch.com, any truck operator across the country can market its brand and communicate with fans. Initially, posting on the website will be free, said Noveshen. “We want to be the largest consolidator of truck information out there.”

Mobi Munch isn’t the first support provider to grow out of the food truck trend. In , for example, a company called RoadStoves leases trucks and commissary space, and provides other services — including a downloadable GPS application allowing customers to track enabled trucks using their phones.

Several websites, such as www.findlafoodtrucks.com and www.roaminghunger.com, attempt to better link truck operators with their followers. And in earlier this year, food truck operators formed the Southern California Mobile Food Vendors Association, or SCMFVA, to give mobile chefs a voice and help ease their way into the marketplace.

Noveshen said the gourmet food truck movement is still very young and somewhat “disjointed,” with some operators giving the trend a “bad rep.” Websites that attempt to help customers find their favorite trucks sometimes have a problem with accuracy.

“Twenty percent of the time, trucks aren’t where they say they’re going to be,” he said. “There could be any number of reasons, from getting stuck in traffic, to needing truck repairs, or sometimes they just run out of food.”

The Mobi Munch site will attempt to engage foodies by rewarding them for “truck spotting,” or identifying where a truck is at any point.

Tang comes to Mobi Munch from MediaVast, a company he co-founded that owned the websites WireImage.com, ContourPhotos.com and FilmMagic.com.