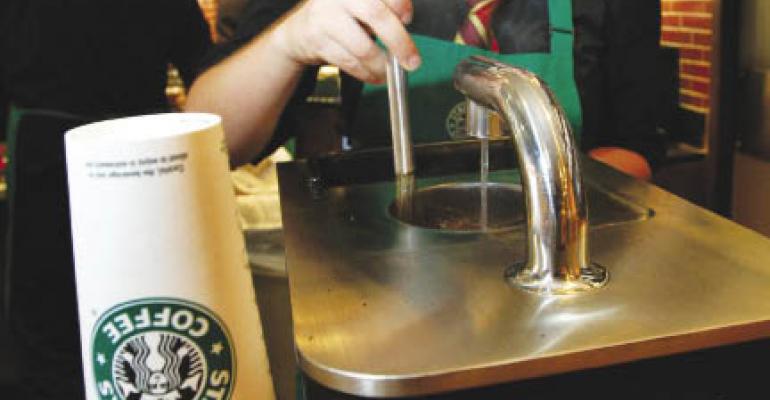 Focusing on service keeps guests coming back for more

Throughout the Great Recession, the conversation about “value” in the restaurant industry has been mainly about price.

If you discount, they will come.

For some in the industry, however, the value message is inextricably tied to providing great service.

Guests may walk through your door because of a discount, such operators contend. But if the service is poor, will that guest spend as much? Will they come back? Will they recommend your restaurant to a friend? Or will they diss you on Facebook, Twitter or Yelp?

“It’s very much a game of creating that loyal following that will return to you,” said Jim Howland, senior director of restaurant practice for the consumer-research firm J.D. Power & Associates.

In tough times, when people aren’t eating out as much, it’s crucial to provide a fantastic experience for every guest you do get in your door, contends Michael Woodhouse, president, chairman and chief executive of the Cracker Barrel Old Country Store chain.

“Value is not just about price. It’s the complete package of what you get for the price,” said Woodhouse.

And though providing great customer service is a ubiquitous objective of any restaurant, some do it better than others, said Dennis Lombardi, executive vice president of foodservice strategies for consulting firm WD Partners.

In fact, he added, “to be able to provide consistently exceptional service is the only sustainable strategic advantage” a restaurant can have.

In recent months, operators across all segments have been taking a hard look at their service models. Many said they have gone to their customers and asked what aspects of service really matter. These are the prevailing themes:

Give me what I want

For 15 years, Starbucks offered a Frappuccino blended drink that became a popular alternative to hot coffee. Although the beverage was offered in various flavors — from chocolatey chip to coffee light — customers who wanted it made with decaffeinated coffee or soy milk, for example, were told it just wasn’t an option.

Until this year, that is.

In May, the company launched a “However-You-Want-It” Frappuccino campaign in U.S. and Canadian locations. Now, guests can customize their Frappuccinos with light syrup or nonfat milk the same way they can customize other beverages at Starbucks.

The move involved retraining baristas to make the drinks faster and more efficiently and providing units with new blenders, but Howard Schultz, the company’s chairman and chief executive, said the seemingly simple customer service tweak has paid off.

“Beyond that, the campaign’s halo effect on the brand helped drive increased sales of bottled Frappuccino across consumer packaged goods channels for the first time in over two years,” said Schultz in an earnings call to analysts. “And beyond even that, it ignited significant consumer and retailer interest and excitement that continues to build around our $2 billion Frappuccino brand platform overall, just as we had planned.”

When researchers ask consumers which restaurant chains “treat them as valued individuals,” Chick-fil-A is often the top-ranked brand in quick service.

Mark Moraitakis, director of service innovation for the Atlanta-based chain, said the notion of seeing the world through guests’ eyes comes from a philosophy established by founder Truett Cathy and the company’s underlying “corporate purpose” of glorifying God by being faithful stewards and a positive influence.

Chick-fil-A calls it “second-mile service,” he said. “It’s rooted in the Biblical principal of going the second mile.”

The very basis of hospitality is “reading the guest,” Moraitakis said. “Everyone who comes in the door is in a different mood or has different circumstances. We want to celebrate with those who feel like celebrating and console those who need consolation.”

The company has some branded service requirements — what they call “recipes for service” — such as training employees to respond affirmatively to guests with “it’s my pleasure,” for example, rather than just saying “yeah.”

One focus has been training staff members to pay attention to guests as they order. In that 60-second transaction, employees are encouraged to make eye contact, smile and to engage without the use of lengthy dialogue — all without slowing the pace of service.

“Instead of fast or friendly,” Moraitakis said, “we want to be fast and friendly.”

Three years ago, Chick-fil-A created a new service innovations department that looked for ways to go beyond the branded service approach and tap into the “creative talents” of franchisees and team members, Moraitakis said.

On a rainy day, for example, one franchisee decided to go out with an umbrella and walk customers in from their cars. Another offered freshly ground pepper at the table to guests who ordered soup or salad.

“We don’t require these things,” he said, “but they’re examples of faithful stewardship.”

Cracker Barrel is another chain that consistently is top-ranked in industry surveys for customer satisfaction in various attributes of service.

It’s an emphasis that has helped the chain weather the recession, said Woodhouse. In the company’s fourth quarter, the Lebanon, Tenn.-based family-dining chain had beat Knapp-Track traffic comparisons for 16 consecutive quarters. Same-store sales were up 2 percent for the July 30-ended quarter.

When the economic downturn hit, Woodhouse said the company made a decision to avoid discounting, instead looking for ways to excel in customer service.

One area of focus recently has been speed of service. The company developed a “Seat-to-Eat” program aimed at helping servers bring orders out more quickly and accurately.

Tweaks included the use of food runners to allow servers more time to interact with guests. A monitor was set up in the kitchen to track every ticket — a common practice, but one that was new to Cracker Barrel, Woodhouse said. Managers were tasked with checking orders for completion and accuracy.

Other little changes helped improve the quality of food served as well. Stores moved away from holding biscuits and cornbread muffins in a drawer, where those on the bottom were rarely touched. Salads are now made to order, allowing for the use of more than one salad base.

The Seat-to-Eat plan has been rolled out in three markets so far, with about 70 percent of the system yet to make the shift, said Woodhouse. Next up will be a look at making takeout more consumer friendly.

“You can’t stand still,” he said. “You have to keep getting better.”

Lombardi of WD Partners said he was dining in a restaurant recently when the chef came out of the kitchen and asked if his table would sample a new grapefruit sorbet.

“He said they were thinking of adding it, and would we try it and tell the server whether or not we liked it,” Lombardi said. Soon after, tiny complementary dishes of sorbet were delivered to the table.

“It completely broke the dining paradigm,” said the consultant. “These small, unexpected surprises for guests can have a huge impact.”

The complementary dessert or bottle of wine is a tool routinely used in fine dining, though often as a way to make up for service mistakes.

Some, however, do it as a point of differentiation. Sherry Yard, executive pastry chef for the Wolfgang Puck Fine Dining Group in Los Angeles, said she keeps notes on regular customers — the flavors and desserts they love — and looks for opportunities to bring them something special and uniquely tailored to their preferences when they come in.

“You walk in, and there’s someone there offering something to you. ‘Would you like to try a cookie or a smoothie shot?’”

And it doesn’t have to involve free food, contends Paul Paz, a veteran professional server who works at Oswego Grill in Lake Oswego, Ore.

Paz said he carries a digital camera on his shift. If customers are celebrating a birthday or event and don’t have their own cameras, Paz offers to take their picture and email it, or he posts it on a Facebook page that prominently acknowledges the restaurant. Guests can share the link with friends.

“It becomes a whole new way of marketing,” said Paz.

Lombardi noted that, in focus groups, consumers often say they prefer servers who know the menu and can steer them in the right direction.

Paz agrees, saying one of the most basic skills of service is simply knowing and understanding the menu.

“When customers ask, ‘What’s good?’ the stupid answer is, ‘Everything’s good,’” he said.

Paz likes to start by asking if guests have been to the restaurant before. If not, he offers a 10-second tour of the menu and tries to gauge preferences.

“If they say they like meat, then I can say, ‘Well I’ve got a fabulous rib-eye’” and describe the dish in detail, or recommend wines, and, most importantly, answer any questions the guest might have.

Too often in this recession, Paz said he hears of restaurants that are hurting financially and force servers to hit certain sales goals or face being moved to a less desirable shift.

“If I have a bad week and my shift goes down, I lose the opportunity to improve,” Paz said. “If you don’t train your staff on tableside sales techniques, they’re not going to get any better.”