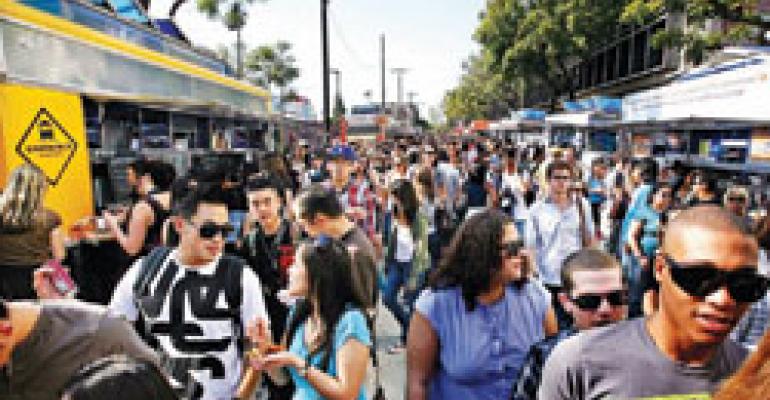 Extreme Pizza grabs a slice of the fast-casual pie

When it comes to growth, Todd Parent, founder of the 41-unit Extreme Pizza chain, believes that restaurateurs should learn to walk before they run.

Or, to put it in the parlance of the extreme-sports-theme pizza concept, one should learn to swim before they kiteboard, a water sport that involves riding a surfboard while harnessed to a large kite.

Parent founded San Francisco-based Extreme Pizza in 1994 as a take-and-bake pizza concept. But very quickly his customers made it clear he needed to tweak the menu.

“They said the product was great,” Parent said, “but they wanted it every way that, at the time, we didn’t offer it: They wanted it baked, sliced, delivered and in supermarkets.”

So he listened and adapted the model, despite objections by Parent’s then-partner Mike Pastor, who later sold out to his partner and other investors. Parent remains the majority owner.

As a result, the first Extreme Pizza location in San Francisco began baking its pizzas, offering it by the slice and delivering, as well as offering it through upscale retail stores like Whole Foods—a practice that later stopped. The chain no longer offers its products through other retailers.

Another 10 locations, one of which will be corporate-owned, are expected to open domestically in 2010.

Extreme Pizza’s goal is to reach 110 or so units system-wide within the next five years, though Parent said the company is being careful “not to over-commit or over-expand.”

In the competitive world of delivery pizza, Extreme Pizza has found a niche with its unusual gourmet offerings at a relatively low price, Parent said.

Still, about half of Extreme Pizza’s sales are from the delivery of baked pizzas, while the other half comes from the concept’s by-the-slice dine-in, takeout and take-home-to-bake offerings.

Pricing by the slice ranges from $2.50 to $5, and pies come in five sizes, ranging from $4.50 for an individual 8-inch pie to $16.95 for an 18-inch one. Parent said sales have remained flat to down by only 1 percent or so despite the recession, as consumers look to value-priced options such as pizza.

“We’re faring well, compared to higher-end restaurants,” he said. “With pizza, like with the QSR model, people are trading down. They’ll still order in.”

Still, Parent said, the chain has been feeling the downturn and has looked for ways to cut costs to boost margins.

In 2009, Parent said the company made the “mistake” of playing the discounting game.

“Our coupon use went from about 6 [percent] to 7 percent to over 10 percent in the past year,” Parent said. “We can’t compete with those guys selling $5 pizzas or Little Caesar’s buy-one-get-one offers. That’s not our model.”

Now the company is trying to move away from discounting and looking for ways to differentiate the brand by being a more “caring organization,” Parent said.

For example, customers are invited to donate the monetary equivalent of their coupons to a fund to support earthquake victims in Haiti. Schools are invited to sell “Extreme Green” bucks for pizzas with targeted educational programs receiving $4 of every $5 sold. The company also markets the brand by sponsoring athletes in the growing field of extreme sports.

Though Extreme Pizza locations typically average about 1,200 to 1,600 square feet, the chain recently opened its second kiosk location in a convenience store. Parent said he is looking for more in-retail opportunities.— [email protected]