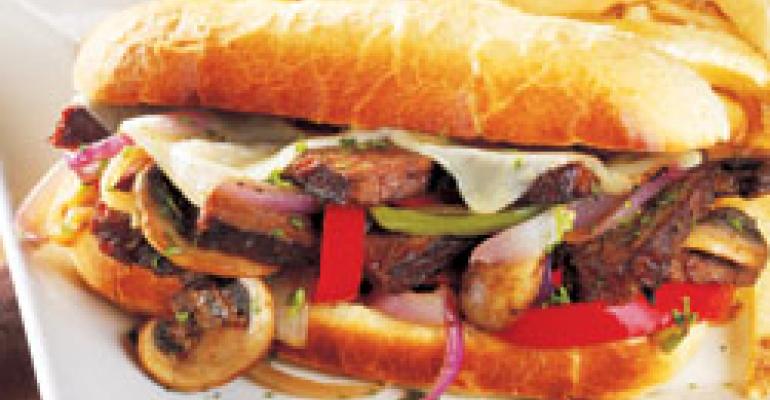 One way to survive this troubled economy is to lower the price of premium products, say some chefs and restaurant marketers who report surging sales of tender beef cuts such as prime rib, strip steaks and filets. That proposition has become a bit easier lately, as the prices of these middle meats have come down.

“There seem to be better bargains in the meat world than in the fish world,” says Jason Ambrose, chef and co-owner of the three-year-old Salt Tavern in Baltimore. “We’re constantly looking at beef prices, and when they do move we try to do our best to share those savings with our customers.”

He credits his restaurant’s survival in part to passing those deals on to his guests.

Tender beef cuts were selling at about 10 percent to 15 percent less in September 2009 than they were in September 2008, says Mike Miller of CattleFax, an independent beef industry trend tracker.

“There is a little bit of a supply bubble going on,” Miller explains.

The excess beef is a result of normal seasonal ups and downs and more cattle going to slaughter because dairy farmers banded together and thinned their herds in an attempt to raise milk prices.

While processors typically use dairy cattle for ground meat, if the animal is in “good condition and younger, they will go ahead and pull the rib and loin out,” Miller says. “That product may find its way into food service—a rib-eye special in Las Vegas,” for example. That meat is “ungraded,” which means a step down from USDA Select, and will impact the general supply.

The appetizer is an Angus strip steak ceviche appetizer, for which he sears the steak, leaving it almost raw in the center, then thinly slices it and tosses it with avocado, shaved onions, lime juice and a spicy barbecue sauce. It’s served on a salt block with purple Peruvian potato chips for $8.

“We always try to be a little funky,” he says, calling his cooking style, “playful.”

“We’re in Baltimore,” he says. “So we get more city people during the week, but on the weekend we get more diners who come out for their big night in the city.

He changes his menu frequently, but he says both the ceviche and the rib eye sell so well that they’re staying put.

In the chain restaurant arena, O’Charley’s has had similar success with beef promotions. A recent limited-time offer for a 7-ounce Grilled Top Sirloin, which was reduced in price from $11.79 to $9.99, was so popular it was placed on the permanent menu that is slotted to debut next month.

“We sold a significant amount of it,” says Nancy Keil-Culbertson, vice president of marketing at O’Charley’s. “We have found from our guests that they are looking for value.”

They’re also looking for beef, she says, and consumer studies confirm that. According to the 2009 Ipsos Public Affairs poll of 1,000 people, “76 percent of restaurant customers say beef is the most mouthwatering of all leading proteins.”

To further appeal to beef eaters, the Nashville-based, 244-unit O’Charley’s chain will expand the availability of its slow-roasted prime rib special that is currently available from Friday evening through Sunday. Starting next month it will be offered every day after 4 p.m. and all day on Sunday.

The “Prime Time Prime Rib” promotion will debut with a “holiday” discount of at least $2 off, Keil-Culbertson says. Currently the 10-ounce prime rib sells for $14.99 and the 16-ounce portion is priced at $16.99.

Helping to make use of leftover prime rib will be a new $7.50 prime rib cheese steak sandwich that is scheduled to roll out Oct. 26, says Stephen Bulgarelli, vice president of culinary development at O’Charley’s. It will feature 4 ounces of thinly sliced prime rib, sautéed with onions, red and green bell peppers and sliced mushrooms. It will be served in a 6-inch “hoagie” roll and topped with an ounce of melted Monterey Jack cheese.

The chain’s rib roasts are slow-cooked on premise, Bulgarelli says. Each store is instructed to rub cap-off, 14-pound roasts with a salt and herb mixture about three hours before roasting. Then the meat is slow-roasted for four hours in a 300-degree oven, Bulgarelli adds.

He gently simmers the bagged meat in a water bath for two hours, he says. At pickup he sears it.

A portion of 6.5 ounces to 7.5 ounces is sliced and served with Brussels sprout leaves, baby beets, beef jus and potato fondant. The dish is one of the main course selections on a $84, three-course tasting menu.

“This is the steak that slayed Bobby Flay” on Food Network’s “Iron Chef” competition, says the restaurant’s chef-owner, Peter Kelly. “We ran it in the month of September, and it has been just crazy. We couldn’t take all the reservations that requested it.”

On the last Saturday night of September, 244 of his 440 guests ordered it at the 250-seat restaurant, he says. So he extended the promotion through October. He also throws in two glasses of Mill-brook Vineyards’ Pinot Noir, creamed spinach, potato gratin, béarnaise sauce and crème brûlée.

“People come in and they have a drink to start, and since the impression is they are getting a great value, we’ve also sold a great amount of first courses,” Kelly adds.

In fact the promotion is “driving business so we are able to almost hold our check average,” which is currently $56.50 a person.

In Phoenix, at the year-old Noca, executive chef Chris Curtiss serves nine ounces of sliced prime rib with a crispy poached organic egg, glazed chipotle onions, fingerling potato coins and red-wine demi glace. Curtiss shocks the egg right after poaching it, then breads and fries it briefly to form a crust, he says.

Kona-crusted sirloin sells for $43 and has become one of the best selling steaks at the 39 units of The Capital Grille, says Jim Nuetzi, corporate executive chef of the Orlando, Fla.-based chain. For the crust, he mixes a liberal amount of finely ground Hawaiian Kona coffee beans with a blend of spices and grated Grana Padano cheese.

The 21-day, dry-aged, bone-in sirloin is dredged in the coffee mixture just before being placed in a broiler heated to between 1,100 and 1,400 degrees Fahrenheit, Nuetzi says. He tops the steak with a caramelized shallot compound butter whisked with a bit of veal stock.