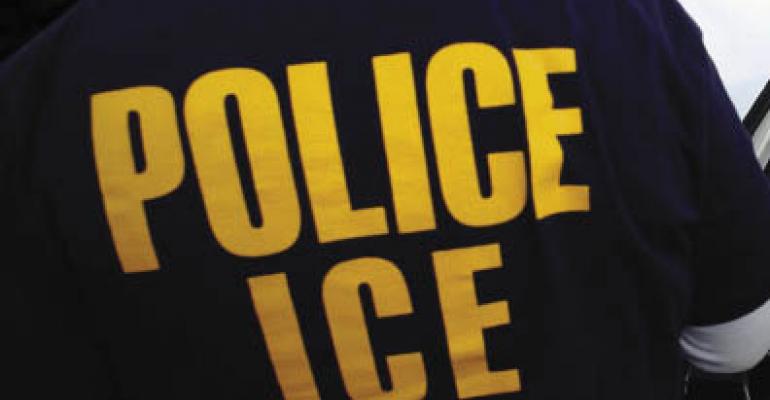 The crackdown by federal immigration enforcement officials on Chipotle Mexican Grill has many restaurant operators wondering if they might be next.

The Denver-based fast-casual chain, with 1,100 units nationwide, was forced earlier this year to let go of a reported 450 employees in Minnesota after a sweep by U.S. Immigration and Customs Enforcement, or ICE, uncovered that suspect documents had been used to verify eligibility for employment.

Although Chipotle officials have maintained no wrongdoing, the ICE investigation was expanded to include Chipotle locations in Virginia and Washington, D.C.

“We have taken this very seriously, and over the past five years we have been working to improve our policies and procedures” for verifying documents, said Chipotle spokesman Chris Arnold. “This has been eye opening for us, and we are looking at ways to improve the process.”

The investigation of Chipotle has been eye opening for many, prompting warnings from attorneys across the country that more such audits would be coming to other restaurant employers — and they were right.

Last month ICE, which shifted its focus from employees to employers about two years ago, reportedly notified up to 1,000 employers across all industries that their records would be inspected as part of a crackdown on businesses suspected of hiring undocumented workers. Attorneys representing some of those targeted employers — who declined to identify their clients because of the pending action — said the sweep included a number of foodservice employers, from fast-food chains to a taco-truck operator.

The stepped-up enforcement comes at a time when both federal lawmakers and individual states are considering proposals that would require all employers to use the government’s E-Verify system, an Internet-based employment eligibility verification program that is currently voluntary.

According to the Pew Hispanic Center, as of March 2010 there were about 11.2 million unauthorized immigrants living in the United States — down from a high of 12 million in 2007 — and about 8 million in the workforce. An earlier study by the center estimated that 12 percent of undocumented immigrants worked in food preparation.

Given the climate of fear among restaurants, the National Restaurant Association is considering supporting an E-Verify mandate bill — but only if lawmakers include protections for employers that use it.

Whether or not E-Verify is mandated, attorneys and industry observers say the message is clear for both large and small restaurant companies: Make sure proper hiring procedures are in place and your paperwork is in order.

“You can’t prevent an audit; all you can do is prepare to minimize the risk of adverse outcome,” said attorney Richard Rawson of Davis Wright Tremaine in Seattle.

A rock and a hard place

In 2008 the France-born U.S. citizen was charged with knowingly hiring unauthorized workers after 18 of his employees were arrested.

Malecot is facing potential prison time, millions of dollars in fines, and the government is seeking to seize his bakery and catering business. He is currently awaiting a trial date.

Eugene Iredale, a San Diego attorney representing Malecot, said the charges have cast a pall over the catering business, resulting in a loss of at least $1 million in revenues.

Employers like Malecot are caught between a rock and a hard place, said Iredale. It’s unlawful to knowingly hire unauthorized workers, but employers are told to accept documents that appear valid.

Questioning the validity of a document, however, or appearing to fire someone based on ethnicity could result in a discrimination charge, he said.

“A lot of people in the restaurant industry are saying that the government has the right to enforce the laws, but [employers] don’t want to be deputized to enforce the statute,” he said. They feel it isn’t their responsibility.

Other employment attorneys say ICE audits are more likely to uncover paperwork errors in the required I-9 forms, which could result in a range of civil monetary fines.

Restaurants also face the loss of employees if suspect documents are found. Chipotle, for example, lost about 40 percent of the chain’s workforce in Minnesota as a result of the investigation, a scenario observers say will inevitably push up labor costs. According to reports, the chains also saw some employee defections as news of audits in Washington, D.C., and Virginia spread.

“These audits are a way for the government to show they’re doing something,” said Angelo Amador, vice president of labor and workforce issues for the NRA. “They’re finding what they call violations, but I would call them errors.”

Something as simple as putting a zip code in the wrong place can cause ICE officials to question a worker’s eligibility, he said.

Paperwork fines can range from $110 to $1,100 per I-9 form, depending on the number of errors, attorneys said.

In 2010 ICE issued a record $7 million in civil monetary fines for immigration-related violations of employment laws, the agency said. That compares with $1 million in 2009.

The I-9 form required for all new hires to verify work eligibility appears to be a simple one-page form, but it has a 70-page instruction manual, said attorney Gregg Rodgers of Garvey Schubert Barer in Seattle.

“I have yet to come across an employer that does it right,” he said.

Rodgers said he is currently representing three companies that have received ICE notices of inspection.

Though ICE officials say investigations are a result of following leads, Rodgers said it appears that the restaurant industry, in particular, is being targeted.

He offered three possible reasons: The industry has high turnover; restaurant workers include a large non-English-speaking population; and it is common for employees to recommend family members for jobs, which could be a red flag for ICE.

Employers are required to examine original documents submitted by the new hire to make sure that they appear to be genuine and relate to the individual in question. However, the law does not require employers to verify the authenticity of documents, according to lawyers.

“Employers usually can’t tell a fake green card from a real one, and they’re not expected to,” said Rawson. “Thus, employers ordinarily are not penalized for unknowingly hiring illegal workers who submitted false documents that appeared to be genuine.”

Rodgers said the first step is taking a close look at the employees who screen documents.

“You have to train the people that are doing it,” he said. “Create a good record at the beginning, rather than a bad record that you have to go back and correct, or one that the government will be looking at in an audit.”

Local restaurant managers often aren’t the best people to perform this job, he said, as they are often distracted and may not do it in a timely manner.

Rodgers also recommends establishing a second level to double check I-9 documentation. This is best done by a human resources professional or central office staffer, he said.

Companies may want to conduct their own I-9 audits, perhaps even by someone outside the company, Rawson said.

As errors are discovered, any corrections made to the I-9 forms should be clearly noted, signed and dated, he added.

The most common error is not filling in the employee’s date of hire, which Rodgers said “is a little teeny blank” that is often missed. Employers could be fined $1,100 for that, he said, though it can be corrected within 10 days without penalty.

Make copies of everything, most attorneys said. This is difficult in the restaurant industry, with its high turnover rate, but employers must consistently keep copies of all documents.

Where attorneys disagree is on the effectiveness of E-Verify.

The system, which is operated by the Department of Homeland Security and the Social Security Administration, allows employers to compare information written on a Form I-9 with that on file in government databases. More than 238,000 employers are currently enrolled to use the system.

For most employers, the decision to use E-Verify is voluntary, although Rawson believes it will at some point become mandatory. He added that employers who publicize that they use E-Verify could see fewer unauthorized workers applying for jobs, for fear of being caught.

“Over time an employer will probably thin out the number of employees who, unbeknownst to the employer, are illegal,” said Rawson.

Rodgers agrees that E-Verify will likely be mandatory at some point, but still advises most clients against using the system.

E-Verify involves both an electronic component and additional paperwork, and employers also can be fined if errors are found.

“Why add the risk of an additional fine for a process that doesn’t necessarily offer additional protection?” Rodgers said.

Others note that E-Verify does not catch identity theft or workers who use someone else’s valid documents.

In Arizona, where use of E-Verify by employers is mandatory under state law, 26 people were reportedly arrested earlier this month in a raid of Pei Wei Asian Diner restaurants after sheriff’s deputies received a tip that some employees may have used identity theft to gain employment.

Investigators searched the fast-casual chain’s corporate offices in Scottsdale, Ariz., as well as several restaurants. At least 121 of the company’s 800 employees in Maricopa County appeared to have used false documents, including false Social Security numbers, according to reports.

Still the NRA is willing to support an E-Verify mandate if legislation includes safe harbor provisions that would allow employers to correct paperwork violations, and protection from liability in the event of errors.

Amador said the NRA would prefer a federal mandate to a patchwork of state requirements.

A growing number of restaurant companies are using E-Verify voluntarily, he added. Dunkin’ Brands, parent of the Dunkin’ Donuts and Baskin-Robbins chains, has required franchisees to use the system since 2006.

But even well-meaning, conscientious employers aren’t immune to the risks.

“Even if an employer does everything right on the I-9 form, they may still end up with illegal workers,” he said.