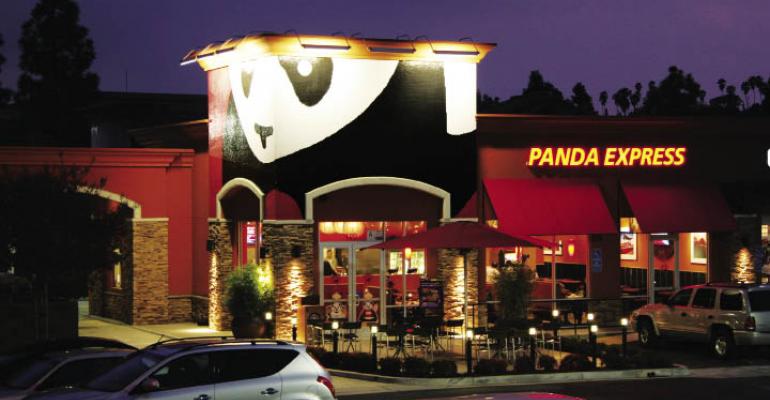 Asian brands tap into the potential of booming limited-service segment

News in February that Chipotle Mexican Grill had moved to patent the ShopHouse Southeast Asian Kitchen name fueled speculation that founder Steve Ells would make good on his intent to develop a fast-casual Asian concept by this summer.

Doubtless Ells’ success with Chipotle, now 1,100 units and still going strong, has convinced him the fast-casual segment is ripe for further growth, but why did he choose Asian? The company would not answer that question, but there’s no shortage of others stepping up with responses.

Some say it’s because Asian flavors are hot, and fast casual is, too. Others point to speed of service and ingredients that create a health halo. Add to those characteristics the head-turning results posted last year by Asian-inspired Panda Express, and restaurateurs have plenty of reasons to be excited about the segment, said Darren Tristano, executive vice president at Technomic in Chicago.

The comparatively diminutive 13-unit Mama Fu’s Asian House posted a 6-percent same-store-sales increase in 2010, following an 8-percent boost in comps in ’09. That success has Randy Murphy, president and chief executive of the Austin, Texas-based chain planning to add 17 units through 2012 and looking to expand the concept to 150 units by 2015.

“When you see the activity we’re seeing with Panda Express, Pei Wei and the news about Chipotle, it confirms what we saw happening a few years ago when we bought Mama Fu’s,” said Murphy, referring to the purchase of the chain from multiconcept franchisor Raving Brands in 2008. In the years since, Murphy and his partners have overhauled the concept and begun franchising it.

“We wanted to do this quickly to get to the dance and be ready, because we think Asian fast casual is horribly underserved,” he said.

Mega-contract feeder Sodexo also is getting into the Asian fast-casual game. Through a partnership with noted Asian chef-restaurateur Mai Pham, Sodexo is developing Pham’s Star Ginger concept to fit into its multibrand portfolio, and plans to roll it out this year.

“The marketplace clearly wants something more authentic, and customers see Asian foods as adventuresome,” said John Nappier, Sodexo’s vice president of business development for its Retail Brand Group. “So with Mai’s guidance, we’ve taken the Star Ginger brand and made it more of a fast-casual brand … for a food-court application.”

At 135 units in 18 countries, including about a dozen in the United States, Toronto-based Teriyaki Experience is a medium-size player, but Joe Arancio, vice president of development in the United States, views the rising competition in Asian fast casual here as “great for the segment.” Not only does swelling interest acknowledge American desire for more than burgers, pizza and sandwiches, it shows a deepening understanding of a wider range of Asian cuisines, not just Japanese or Chinese.

“Asian food still has that exotic component that gets people interested, and they largely think of it as healthy,” said Arancio. “And when you see a company like Chipotle making moves to get in, I see that as exciting.”

“Panda’s large, but you really don’t have a dominant player yet in Asian fast casual,” he said. “The segment is definitely undersaturated.”

Fast casual was one of the few restaurant segments to fare well during the recent recession, so it makes sense new players are focusing on it, said Bonnie Riggs, restaurant analyst for The NPD Group in Port Washington, N.Y. While sales growth for the segment has slowed during the past five years, it remains positive. According to NPD, segmentwide sales rose 14 percent in 2006, 11 percent in 2007, 8 percent in 2008, and 5 percent in both 2009 and 2010.

“When you’re performing like that in an overall market that’s slow, that’s saying you’re meeting a need in the marketplace,” said Riggs. “Some of that overall growth was due to unit expansion, but in the last two years they’ve had positive comp-store growth. That’s real demand.”

Riggs and others say the recession actually benefited fast-casual operators because they offered a high-quality trade-down option for casual- and fine-dining fans eager to save money, while remaining within reach of the budgets of fast-food patrons keen on an occasional splurge.

“This segment overall has met consumers’ expectations of value — not the cheapest price, but good-tasting food made from fresh ingredients and sold at affordable prices,” Riggs said.

Season that performance with the foods and spices of Asia, and fast casual is solidly on-trend, she added. “In our CREST data we found that 23 percent of consumers say they’re looking for more Asian-type flavored foods,” she noted. “That’s a pretty high number.”

Regardless of the recession, Glenn Lunde, senior vice president and chief marketing officer for Panda Express, believes Asian fast casual’s popularity is surging because of the American restaurant industry’s ongoing evolution. The explosive growth witnessed in Mexican food concepts 20 years ago is slowing some, allowing a momentum shift toward Asian foods, he said.

“Though there’s still upside in Mexican, which Chipotle is proving, the growth curve there is flattening now,” Lunde said. “Asian food is in a high-growth mode now, which is why venture capitalists are so interested.”

Maybe, or maybe not, said Tristano. Hefty investments made in restaurants by outside investor groups don’t always reflect a love of food or concepts, he said. Sometimes they’re about the potential to make a profit on a company’s property or the chance to franchise portions of all-corporate store systems.

“If you go back to when Sun Capital bought Smokey Bones for $75 million, they sold off about the same [dollar] amount in real estate alone and almost broke even just on that,” he said. “Sometimes private-equity money flows into restaurant concepts that are underperforming because those investors see the upside potential in turning them around. So there’s really no single answer there.”

Others point to the inherent speed of service in the Asian fast-casual model as a possible factor for its surging popularity. According to K.C. Moylan, president of the 168-unit Pei Wei Asian Diner chain in Scottsdale, Ariz., customers often don’t want to invest the time required for a full-service restaurant visit, and choose fast casual’s speedier pace.

“Typically in fast casual you can eat in under 30 minutes and have a comfortable experience,” Moylan wrote in an e-mail. “So I think it’s more of a consumer preference and a change in the way they want to use restaurants,” Moylan said. On the heels of its modest 1.8-percent same-store-sales growth in 2010, Pei Wei is planning to open six to eight new units this year.

Mama Fu’s goes a step further, with online ordering and delivery, the latter of which represents a significant and growing part of its business, Murphy said. In the evening Mama Fu’s stores switch to a hybrid “flex-casual” service approach that provides full service for less-hurried customers.

“That’s helped make dinner our strongest daypart,” Murphy said. “We do 55 percent of our business at night now, and 45 percent at lunch, exactly the opposite of most fast casuals.”

Lunde called the wok cooking at the center of Asian fast casual “the ideal business model” because of preparation speed, and Arancio called display cooking “dinnertainment” that helps Teriyaki Experience and others like it enjoy the perception of being “like a miniature Benihana.”

“It also says freshly prepared, which is so important,” he said.

NPD’s Riggs echoed Arancio’s statement, noting the eye appeal of “colorful, fresh ingredients prepared in front of you.” She also pointed to the appeal of customization, noting, “When you can pick what you want while looking at it, that’s important to consumers.”

Others say wok cooking in plain view is a subtle reminder to guests that they shouldn’t try replicating such dishes at home.

“You can make a burger on the grill, and lots of people even do Mexican at home now,” Lunde said. “But no one’s ever going to try cooking orange chicken at home because of the preparation required.”

“Not only do we know it’s probably not inexpensive to prepare at home, most of us just don’t know how to do it,” she said. “That could discourage people from cooking it at home.”

Young restaurant goers are playing a significant role in the growth of the Asian fast-casual segment, and that interest is expected to remain strong well into the future. Not only has the 18- to 25-year-old demographic proven willing to experiment with new flavors, spices and dishes, the members of that age group see food — especially emerging ethnic cuisines — as trendy and hip.

Strong sales of Asian foods in its college dining accounts led Sodexo to pursue its partnership with Star Ginger, a concept it will roll out to its healthcare, government and corporate-dining accounts, said Ray Torres, director of business development.

“Gen X and Y are really driving it, but we’re seeing the desire for these foods in all age groups,” he said. “The reality is the world is a smaller place, and younger groups know more about places we didn’t used to know. So foods that may have been on the fringe a couple of years ago are now becoming mainstream.”

While Arancio said that “everyone from 2 to 92 is enjoying our food,” he noted that the younger crowd, specifically 24- to 35-year-olds, makes up Teriyaki Experience’s core customer base. That same group also skews strongly toward women, he said, because of the segment’s healthful food perception. In Canada many of the concept’s dishes are made using water rather than oil, and all its stores make sushi twice daily.

Riggs predicts that in the near term, fast-casual Asian outlets will incur mostly incremental growth from customers 30 or older, but with the increased purchasing power of Generation Z, or those aged 19 to 29, will come solid and enduring sales.

“There are about 90 million in this group, and we think they’re going to be the heaviest users of this concept,” Riggs said.

Heavy in terms of frequency, not body weight, several sources stressed. Twentysomething customers especially are choosing the segment’s healthful offerings, such as pho, steamed seafood and meat-free wok-seared dishes. To meet that growing demand, Star Ginger’s lineup will include multiple vegetarian and vegan items. In 2009 Panda Express introduced its “Wok Smart” menu featuring 18 items containing fewer than 250 calories. And Ravine Hiranand, who launched his Fresh East Asian fast-casual concept last December in West Hollywood, Calif., ensured all of his dishes were healthful at the outset in order to meet strong demand for wholesome foods there.

“We only use grapeseed oil, no ghee, and only natural and organic products,” said Hiranand, a Hong Kong native whose concept offers Indian food along with multiple Asian cuisines. Hiranand insisted the dishes be authentic as well as affordable.

“We attract all walks of life to Fresh East, but the unifying factors are their consciousness of what they eat and their love of Asian food,” he said. “It’s for a family crowd [that] wants to save money and eat good, too. I think the fast-casual model is perfect for that.”