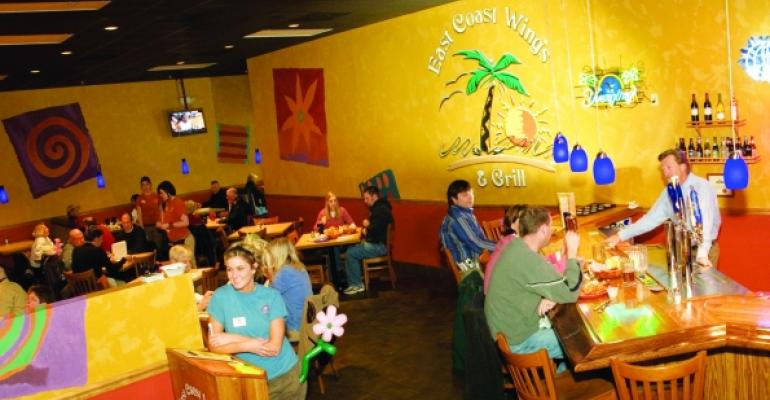 Chicken wings took off more than a decade ago, but after 25 consecutive quarters of same-store sales increases, East Coast Wings and Grill is proving that the trend still has legs.

The concept was founded in 1995 in Winston-Salem, N.C., and in 2000 was taken over by the current chief executive, Steve Ballas, who believed it had potential as a family-oriented concept. East Coast Wings has since grown to 15 units throughout North Carolina, and Ballas expects to expand the chain into the Southeast and double that number by the end of 2011.

“The past two years have not been easy for other restaurants in the casual-dining industry,” Ballas said. “Our concept has proven that it can be successful in good times and in the tough times as well.”

Ballas’ background is in finance, but he grew up in the restaurant industry, where he gained an appreciation for menus that have universal appeal.

“It was always historically easier to maintain a family restaurant than it ever was to maintain high, 35-percent-to-45-percent alcohol sales,” he said. “That was an intriguing issue for us. Back when East Coast Wings started in the late ’90s, it had that typical wing spot flair with beer everywhere.”

But these days, “you’re going to walk into an East Coast Wings and see everyone from Grandma to baby in there,” said vice president of operations Tom Scalese. “There’s no one who won’t come in and see us, from someone who is a wing connoisseur like me who likes sports and wants to come in with some buddies, to someone like my wife who doesn’t want the wings but loves salad.”

Menu trends consultant Nancy Kruse, president of the Atlanta-based Kruse Company, said she “can’t quite believe we’re still talking about wings, but it’s clear consumers can’t seem to get enough of them.”

“They’ve been growing in popularity for over a decade and have long since eclipsed nachos as the go-to appetizer on chain menus,” she said.

Kruse added that one of the main attractions of wings is their compatibility with a wide range of flavors, which is a point of pride for East Coast Wings, which boasts 675 possible combinations of flavor and heat level for its wings.

As something of a culinary test drive, curious customers can order a one-wing sample of “ECW Insanity” for $1.89. They can also get a T-shirt that says, “I survived the Insanity Wing” for $10, although the menu advises that anyone wishing to try it must be over 18 and sign a disclaimer.

Chicken wings are a staple of the concept, but East Coast Wings’ six-page menu includes such casual-dining fare as burgers and Southwestern-style appetizers, as well as the chain’s hot-sauce fajita dish called “Buffalajita.”

East Coast Wings franchises are available in three prototypes. The full-service concept ranges from 3,800 square feet to 4,600 square feet and seats up to 125, while the 2,000-square-foot counter-service prototype seats up to 60. The medium-sized in-line prototype, in which guests can order at a counter and have their food delivered to their tables fast-casual-style, can occupy a space of just 3,200 square feet.

Ballas said startup costs for a full-service franchise run between $520,000 and $540,000, not including tenant improvement reimbursements from landlords, which Ballas said have been increasing as the brand’s reputation has grown.

Ballas said keeping franchisees happy and profitable is key to the company’s success.

“Our main focus is net operating income, and we drive that through the franchisees first,” he said. “When you see that front line and you’re helping that front line fight, the general in his tent is going to be happy.”