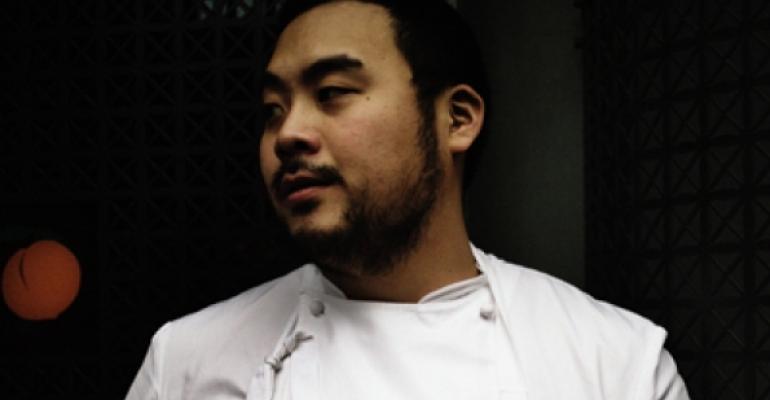 A shining star in New York’s celebrity chef firmament, David Chang is among the prominent chefs that have helped spur the new popularity of Korean food in the United States. His kimchi apple salad with maple labneh and bacon is a dish that helped introduce Americans to kimchi, the spicy pickled vegetables that are a staple of Korean cuisine. However, the dish didn’t come about easily for the chef-owner of the Momofuku empire.

The dish, which is on the menu at Momofuku Ssam Bar in New York, combines an array of cultures. Crispy and slightly sweet, it has a spiciness that's offset by a maple-infused version of the yogurt-like Middle Eastern cheese labneh.

Chang said the dish was a replacement for a wildly popular salad that had two kinds of apples, sliced to order and served with lychee, chile peppers, bacon lardons and a seasonal herb. “It was a very time consuming thing on the pickup, because every table seemed to order it,” Chang said of the past dish.

Slicing the apples ahead of time wasn’t an option, because they’d turn brown, so Chang had to think of a way to keep them from oxidizing. He tried to brine and pickle the apples as he did to cabbage for kimchi, but they just turned to mush.

Next, Chang turned to a kimchi purée that he used in his burritos. He found that if he tossed his apples in that, they wouldn’t oxidize and they’d still keep their crunch. But Chang didn’t think his customers would readily take to the spicy, in-your-face flavors of kimchi without something to cool it down.

Looking at his apple creation, Chang saw similarities to Indian dishes and remembered that in similar culinary situations, Indians used yogurt to cool down spicy food. That's when he began working on a yogurt-like element for the dish.

“One of the iterations [of the dish] was buttermilk with cayenne, and it just didn’t work,” Chang said.

Adding labneh was the brainchild of Chang’s colleague, Tien Ho.

“I had never heard of labneh,” Chang said. But Ho learned about the ingredient when he worked for chef Gray Kunz at Café Gray in New York. Kunz, himself an expert in Southeast Asian flavors, had learned about Indian ingredients when Floyd Cardoz, who would later go on to be the executive chef of French-Indian restaurant Tabla, worked for him at Lespinasse, also in New York.

The introduction of maple into the dish was even more serendipitous. “I remember sitting in the office trying to figure out something to go with the apples, and somebody bought maple syrup that was near an apple stand,” recalled Chang.

Around the same time, Chang and his staff were sampling bacon for what he called “bacon-of-the-month-club-type stuff."

“We had all of these leftovers, and that’s how it all came together,” he said.

Chang said Fuji apples work best for the dish, although Macouns work well, too. He said he likes to use cured jowls as the pork for the dish, black pepper for a different kind of heat than the chiles in kimchi, maple-sweetened labneh, and finally, a type of green.