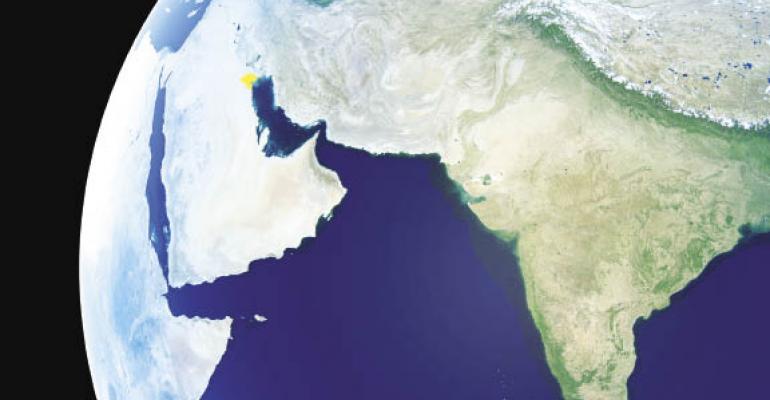 Despite having a couple dozen licensed Red Lobsters in Japan and a handful of franchised LongHorn Steakhouses in Puerto Rico, Darden Restaurants Inc. has shown little appetite for overseas growth.

But in October, Darden bit off a big chunk of international development in the Middle East, prompting industry observers to question whether the United  States still offered room to grow.

Over the past two decades, other restaurant operators, both small and large, have staked out territory abroad. But the Orlando, Fla.-based casual-dining giant has held back, growing its concepts, which also include Olive Garden, Seasons 52, Bahama Breeze and Capital Grille, as corporate-owned operations chiefly in the United States and Canada.

The prospect of expanding Darden’s concepts was on the mind of Clarence Otis, chairman and chief executive of Darden. He called October’s Middle East agreement with Americana Group of Kuwait “part of our ongoing focus on additional growth opportunities.”

Americana will develop and operate at least 60 Red Lobster, Olive Garden and LongHorn Steakhouse outlets in Bahrain, Egypt, Kuwait, Lebanon, Qatar, Saudi Arabia and the United Arab Emirates over the next five years.

The agreement, Otis said, “is an exciting milestone in Darden’s history” and will firmly plant the company in “an attractive, growing market that has shown a strong affinity for American brands, especially American dining brands.”

Growing markets are what restaurant companies need — and they are increasingly difficult to find stateside.

The foodservice industry’s domestic growth is forecast to grow only 8 percent over the next 10 years, The NPD Group reported earlier this year, noting that the projection spreads a rate of increase that had come to be expected in a single year before the Great Recession over an entire decade.

And Darden is not alone in looking for new, more financially fertile lands across the seas.

Dallas-based Brinker International in May staked the growth of its flagship Chili’s Grill & Bar concept on international partners.

And international results are more robust than domestic ones for many brands with a global presence. For instance, Yum! Brands Inc. of Louisville, Ky., last month reported that system sales growth for the quarter ended Sept. 4, before foreign currency translation, was 5 percent, with gains of 18 percent in Yum’s China division, 5 percent in Yum Restaurants International and a pallid 1 percent in the United States.

Still, the domestic market is not yet an abandon-all-hope-ye-who-enter-here region, say observers, who note that domestic growth potential varies by segment and concept.

“The U.S. domestic market may appear to be somewhat saturated at first glance,” said Jay Goldstein, principal with Advance Foodservice Consulting in Allen, Texas, “but there still is significant room for growth in the right segment with the right concept.”

“What typically happens during a recession is that we do pull back in terms of unit expansion,” she said. “Operators will close underperforming stores and then stop building for a while. Typically, things will expand once again. I do not believe that will happen this time around. I do feel that we are a mature market.”

She added, however, “There will be pockets of growth. One that has continued to build, even throughout the recession, has been fast casual. Even the doughnut category has been a growth area in terms of unit expansion.”

Much of the difference in growth potential lies in the maturity of the market segment — but even then, innovative ideas can take off, Goldstein said.

“Fast casual is still in its initial growth phase and has a very promising future with terrific potential for growth,” he said. “There is a good mix of local, regional and national concepts either ready for or already showing strong growth numbers.

“While casual dining is a more mature and crowded segment, there remains room for fresh, distinctive and not ‘me-too’ concepts,” he continued. “Saturation really is a concept-by-concept issue. The ‘built out’ concepts will struggle to grow and may seek other avenues for growth through acquisitions, new concept development or brand extensions.”

The U.S. restaurant industry has experienced a dramatic shakeout in the past two years, which is both a sign of the difficult competitive environment and the room for opportunity.

The NPD Group’s “Spring 2010 ReCount” found the number of restaurants in the United States had fallen by 5,204 units, a 1-percent decline from the total number of eateries recorded in the spring of 2009.

Meanwhile, the global foodservice industry experienced slight growth as a result of increased consumer spending in the quarter ended June 2010 compared with the same quarter a year ago, NPD found. Bright spots were Canada and China; the economic recovery and increased consumer confidence of the latter caused its foodservice traffic to increase by 13 percent.

It’s in that landscape that Darden entered into its first area-development agreement abroad. The company already has five franchised LongHorn Steakhouse units in Puerto Rico, which it inherited with the purchase of Rare Hospitality in 2007, and 25 licensed locations in Japan, which existed before General Mills spun off Darden as a separate company in 1995.

In Americana, Darden found a company that already had more than 1,200 restaurants in the Middle East — including KFC, Pizza Hut, Hardee’s, Krispy Kreme and TGI Friday’s units — and operates eateries in 14 nations. It also manufactures retail foods.

“The Americana local-nation partner fits the profile of good expansion practices: find a multi-concept operator with sufficient units, infrastructure, access to capital and local nation/region expertise,” said John A. Gordon, principal in the Pacific Management Consulting Group. He also noted that the Middle East, along with Asia, is among the most appealing expansion areas.

“The U.S. is very much over-restaurant-developed,” Gordon added. “DRI was facing … the specter of running out of U.S. sites that could fit its $4 million approximate average-unit-volume baseline.”

Since the mid-2000s, Gordon added, Darden has needed to show growth beyond U.S. sites and margin expansion to meet the Wall Street expectations of 10 percent to 15 percent annual earnings growth.

“DRI got a fair amount of push-back [from analysts] in September about how it could hit its 2011 numbers with Red Lobster at negative 1.7 percent,” Gordon said.

Darden owns and operates 1,800 restaurants that generate more than $7 billion in annual sales.

“The company has previously stated that growth would be focused around the three major concepts — Red Lobster, Olive Garden and LongHorn Steakhouse — and we believe international franchise growth opportunities are significant for these brands,” he continued.

Marzouk Al Kharafi, chairman and managing director of Americana, is optimistic about the partnership.

“Consumer demand for casual-dining brands in the Middle East market has grown over the past decade, and we expect that growth to continue in the future,” he said. “The addition of these three highly regarded brands to our portfolio enables Americana to build on its long legacy as the leading restaurant operator in the region.”

As for U.S. concept owners, consultant Goldstein said domestic growth “will be done in a much more deliberate, discriminate manner.”

He added, “Site criteria and metrics will play an increasingly critical role in determining total growth potential for a concept and where the growth opportunities exist.”

Riggs of NPD added that the U.S. restaurant industry is “in a mature market. It is going to be a battle for market share.