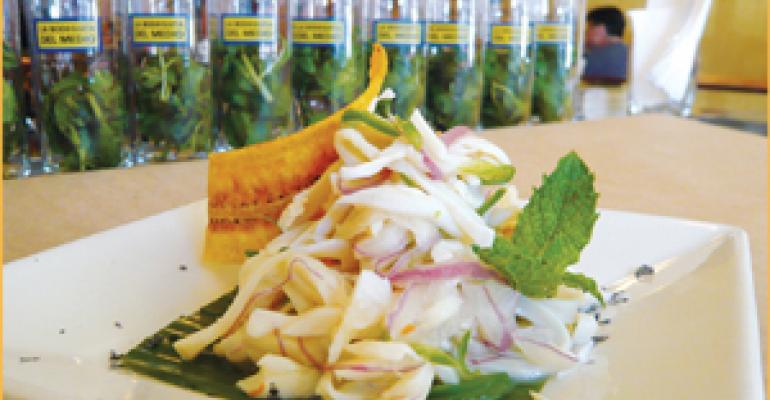 Once considered a regional dish of Florida and tropical outposts in the Caribbean, conch is appearing on a bevy of fine-dining menus across the country.

A staple of Caribbean cuisine for hundreds or perhaps thousands of years, the marine snail—or gastropod mollusk—feeds on algae and offers high-protein, low-fat meat. Conch was at one point so popular in Key West that locals call themselves ‘conchs’ and refer to Florida’s southernmost Key as the ‘Conch Republic.’ In recent decades, however, conch’s popularity has resulted in a dwindling supply due to overfishing and the consequent prohibition of conch fishing in U.S. waters.

But a sea change has taken place in the world of conch as a food staple in recent years, egging on its popularity among discriminating chefs.

Michael Ekwall, chef-owner of La Bodeguita del Medio in Palo Alto, Calif., says he has served conch since the restaurant opened in 1997. In recent years he switched to the farm-raised variety, as it is “much more tender and sweet than its wild counterpart.”

“Conch is rare here on the West Coast and intriguing for our customers,” he says.

He typically offers three conch dishes, but his favorite is “Scorched Conch,” a conch salad similar to a ceviche. It sells for $12 and, he says, always sells out. He picked the recipe up in the Bahamas and modified it by removing tomatoes and bell peppers and adding a habanero and jalapeño mix.

Ekwall removes the conch from its shell. He then cleans it, adds the pepper mix, sour orange juice, onion and salt. “That’s it,” he says. “It’s fresh, hot, spicy, salty and a bit sweet.”

His customers appreciate that the conch is farmed in a sensible and renewable manner.

“That is an extremely important facet of the culinary tradition here in northern California,” he says.

Tim Cushman, former apprentice of Nobu Matsuhisa, is chef-owner of four-month-old O Ya in Boston’s leather district near South Station. O Ya, which means “gee whiz” or an exclamation of discovery in Japanese, is a contemporary Japanese restaurant. Cushman says he uses farm-raised conch for just one sashimi dish.

“I think if you cook it, you lose what it is: a sweet, subtle and gentle flavor,” he says. Cushman slices the conch paper thin and piles it about 1.5 inches high. He whisks a light dressing using white soy, Japanese yuzu juice and olive oil. He grates lemon zest on top of the dressed conch and serves it on a deep-blue dish with bamboo leaves.

“It gives it a nod towards the ocean,” he says, “and the white soy also brings out a light ocean flavor because it has a subtle flavor.”

Cushman has 80 items on the menu and changes it every day, but the conch stays.

“It is very popular,” he says. “I have had chefs from other restaurants come in and say they liked it and want to serve it in their restaurants, so it is getting a really good response.”

Gerry Gnassi, executive chef of the Grace Bay Club on the Providenciales, the largest of the Turks and Caicos islands, says conch is a staple in the region and is very popular with tourists.

One of his favorite conch dishes is a “firecracker-fried spring roll” with charred-pineapple salsa and rum punch dipping sauce. Gnassi washes a pound of the farm-raised conch in cold water and pats it dry with paper towels. He then pounds the conch with a mallet to approximately one-quarter-inch thick to ensure tenderness.

He blanches the pounded meat for two minutes in boiling water and shocks it in ice water. Next Gnassi cuts the meat into strips approximately 1.5 inches wide by 2.5 inches long. He then cuts spring roll wrappers into 2.5-inch strips and places one conch strip on each wrap. He places crab and wakame seaweed on the conch. He then rolls each wrap around the conch, crab and seaweed, seals it with egg wash, and fries it.

“Once all the pieces are rolled,” he says, “they are breaded in a mixture of Japanese breadcrumbs, black sesame and shredded coconut,” giving a distinctive Asian yet Island flavor.

Gnassi pairs the conch spring roll with a charred-pineapple salsa. For that he slices peeled pineapple, drizzles it with oil and chars it. He dices the pineapple and adds diced mango, red onion, cilantro, lime juice, sweet chile sauce and barbecue sauce.

For the second sauce, a rum punch, Gnassi reduces dark rum with orange liqueur, orange juice and lime. The he adds tomato paste and sweet chile sauce, thickens the mixture with cornstarch, and cools it before serving.

These are just some ways to serve conch, Gnassi says.

“We pretty much do everything with conch you can think of: ceviche, fritters, stew,” he says. “It is very versatile and very much in demand.”

In Florida, executive chef Carlos Jorge of The Resort at Singer Island’s Solu restaurant also serves farm-raised conch. About five years ago he was diving off the island of Salt Cay in the Turks and Caicos and found himself eating the conch “island style” with coarse salt and lemon juice.

“I just thought the flavor and texture was so vastly different from that of what I’d been accustomed to in parts of Central America where they use a Bahamian frozen product, which is much more of a ‘textural challenge’ if not properly prepared,” Jorge says. “These tiny beauties can be eaten right out of the shell with little preparation, and the flavor is fresh and clear.”

Jorge serves conch ceviche alongside yellowtail snapper and scallop ceviche. The conch is thinly sliced and marinated with aji Amarillo, a Peruvian yellow pepper, and baby ginger, yuzu juice and soy sauce. He garnishes it with finely minced jalapeño peppers, tomatoes and a chiffonade of cilantro.

The ceviche appetizer sells as a trio of approximately 4 ounces for $19.

Jorge also sells conch bisque that he says is true to the Honduran and Costa Rican versions of sopa de caracol. It is flavored with ginger, lemon grass, Thai curry paste and coconut milk. The conch is thinly sliced and seared with a little ginger-infused oil. The soup is poured tableside into a bowl containing the seared mollusk.

“We sell the bisque for $12 as an appetizer,” Jorge says. “We don’t serve the bisque as a regular menu item, but it flies when we do offer it.”

Jerry Pool, assistant director of food and beverage at Dominique’s at The Maison Dupuy Hotel in New Orleans, says that conch is one of the main ingredients in many of Dominique’s dishes, such s conch risotto, and is prominently featured in the chef’s latest cookbook.

Not every chef says the farm-raised variety of conch is always the best choice. Eva Bolivar is the chef-owner of Bili Restaurant on Vieques, an island municipality of Puerto Rico several miles southeast of that island. Bolivar says she uses fresh, wild conch when she can, but a fishing ban on local conch several months of the year necessitates the farm-raised variety.

“The difference is tremendous,” she says. “Fresh conch has a mild sea taste. The consistency is not rubbery.”

Bolivar makes a lobster and conch pastels. She occasionally sells it as an appetizer for $16, but usually it is an entrée for $42.