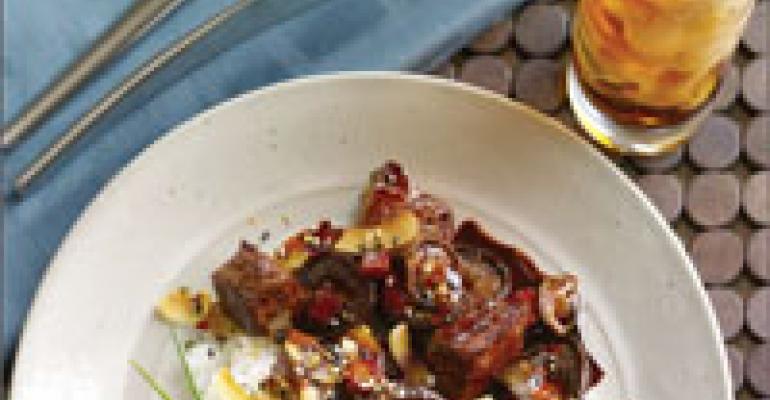 Mushrooms may rarely be a marquee ingredient, but chefs at high-end establishments, vegetarian eateries and large chains alike say mushrooms’ ability to enhance the flavors and textures of dishes make them an indispensable part of their kitchen arsenals.

On Manhattan’s Upper East Side at davidburke & donatella, mushroom cavatelli with braised short ribs is one of the restaurant’s signature dishes. For the pasta, executive chef Eric Hara sautés a mix of mushrooms, including oysters, criminis, portobellos and shiitakes with truffle butter, mascarpone, truffle oil and mushroom stock. The mixture is paired with house-made cavatelli prepared with ricotta, semolina, flour and eggs. The braised short rib is placed on top of the pasta, and the $32 dish is garnished with mushroom chips and chives.

For the mushroom chips, large button mushrooms are sliced and fried in clarified butter. A mushroom stock used in the sauce is made from trimmings and stems.

“I think it is just a good combination with the meat,” Hara says. “It is a really earthy dish, and mushrooms are earthy. Short ribs are the centerpiece, and mushrooms accentuate the short ribs.”

“We go through cases of mushrooms,” Hara adds.

“We don’t set out to develop recipes specifically to use mushrooms,” he says. “It always comes up as, ‘What could this use, what would really make this exciting?’”

Okura touts the Kobe beef burger as one dish that is enhanced by mushrooms. The patty is topped with sliced shiitakes, combined with caramelized onions and an Asian soy-based sauce, which Okura says gives Cheesecake’s Kobe burger an edge over others in casual dining. It is priced at $12.95.

As a contrast to mushrooms being a secondary ingredient, the wild mushroom burger at The Grand Lux Cafe, another Cheesecake concept, with 13 units nationwide, puts them front and center. The meatless patty appeals to a smaller segment of guests, but enjoys a high level of popularity within that segment. Okura says the burger isn’t a best-selling dish, but a fervent following among its devotees has the sandwich in good standing on the menu.

“It is there for a select group of people,” Okura says. “We find that it does quite well for those who are interested in that non-meat burger sort of experience. What we are told is that people who do order it reorder it and love it.”

A combination of chopped and sliced buttons, criminis, shiitakes and portobellos are sautéed together with garlic, shallots and fresh thyme. After cooling, Dijon mustard, breadcrumbs and Parmesan are added to the mixture to help bind the patties together. Then the burger is grilled and served with lettuce, tomato, onion and fries, with a basil aïoli on the side. The dish sells for $10.

“It is very labor-intensive,” Okura says. “The mix has a very short shelf life. But we are committed to it.”

Okura says the intense popularity of the dish makes it hard to drop even though it is not in the top 10 percent of burger sales. The perceived healthfulness of the dish is another selling point for customers, he says.

Andrew Hunter, vice president of culinary development for Wolfgang Puck Worldwide, says mushrooms can be expensive for a hybrid chain like Wolfgang Puck Bistro, which combines fast-casual service during the day with a full-service, casual-dining format in the evenings.

“We don’t use porcinis and chanterelles, even when they are in season,” Hunter says. “We stick to the criminis and buttons and sometimes the portobellos.”

Still mushrooms get plenty of play on the menu at Wolfgang Puck Bistro, which has units in Charlotte, N.C., and Los Angeles.

“For me they are a workhorse ingredient,” Hunter says. “People see mushrooms and it draws them to a dish. Especially a vegetarian dish.”

One such dish is a Mediterranean vegetable focaccia melt, which is a hot sandwich with roasted vegetables and goat cheese that sells for $9.95 in Los Angeles.

“Mushrooms play an important role,” Hunter says, adding that the sandwich attracts customers who would not usually order a vegetarian dish.

At Greens Restaurant, a vegetarian establishment in San Francisco, executive chef Annie Somerville uses wild mushrooms in phyllo purses, which have been on the menu in one form or another for more than 10 years.

“The phyllo itself is just a vessel for ingredients,” she says.

This spring she filled the phyllo with a mixture of artichokes, crimini mushrooms, leeks and pecorino cheese and served it with braised French lentils and sautéed rainbow Swiss chard. The dish sells for $23 or $24, depending on what goes into the purses.

“It’s important for a vegetarian menu to have a lot of variety,” Somerville says. “Our whole approach to cooking is just vegetables as they are. We don’t go looking for that meat substitute.”

But Somerville acknowledges that mushrooms can have that effect for diners.

“They have great flavor, they have a meaty quality, they have wonderful texture,” she says. “So yeah, mushrooms make a difference on our menu.”

Andu Restaurant and Lounge in Miami offers a porcini mushroom cannelloni with herbed ricotta and truffle au jus for $18. Chef Nate Martin aims for a dish that appeals to those looking for vegetarian items. In addition to porcinis, he mixes in domestic buttons, portobellos and shiitakes and varies the preparations to get different tastes and textures into the dish.

He adds some mushrooms to the cream sauce raw and cooks them down, and flash fries some others for crispness. For the filling he purées the mushrooms, cooks them with garlic, shallots and white wine, folds that with the herbed ricotta and stuffs the mixture in cannelloni. A truffle au jus is drizzled on the pasta just before service.

“You are going to get mushrooms three or four different ways,” he says of varying the preparations and using four different kinds. “It gives you a nice balance of flavor for the mushrooms. You get a little different flavor from all four.”

Monica Pope, executive chef at t’afia in Houston, uses shiitake mushrooms in her balsamic-caramel beef cubes to enhance the mouth feel of the dish. She leaves the shiitakes as caps, rather than slicing them, which she says helps them retain a chewier texture, for a contrast to the tender beef cubes.

“It’s a deceptive dish, you know. It is all the same colors, like brown and white, and then you go, ‘Oh my gosh, it’s the shiitakes,’” she says. “I like the texture of the whole cap.”

The sauce is made with a sweet soy sauce, reduced with balsamic vinegar, sugar and a house-made vegetable stock, and is then added to seared beef cubes. The cubes, sauce and shiitakes are served over sticky rice with gomashio, a Japanese condiment Pope makes with toasted seaweed, black and white sesame seeds, red-chile flakes, and salt. It sells for $20.