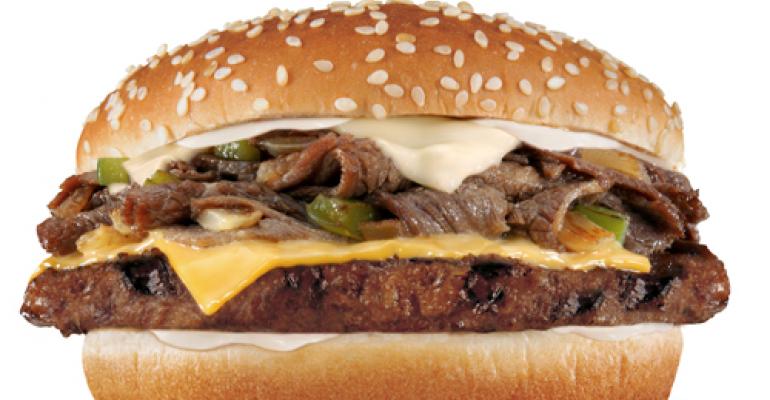 In a return to its previous emphasis on meat as a condiment, Carl’s Jr. has introduced a Philly Cheesesteak Burger.

The new Philly Cheesesteak Burger features a beef patty topped with thinly sliced steak with peppers, onions, Swiss and American cheeses and mayonnaise on a seeded bun. It is available for the recommended price of $3.49, or as part of a combination meal with fries and a drink for $5.99.

Carl’s Jr. has long been known for topping burgers with meat. Past limited-time offers have included burgers topped with prime rib or pastrami, for example.

“Carl’s Jr. has developed many successful burger creations by combining the great taste of charbroiled beef with popular all-American sandwiches, and the new Philly Cheesesteak Burger is the best yet,” said Brad Haley, CKE Restaurants’ executive vice president of marketing.

• Daniel Ponder Jr., who served as a director from 2001 up to the merger. He is president and chairman of the board for Ponder Enterprises, a franchisee of the Hardee’s brand since 1984.
• Jerold Rubinstein, who served as a director from 2006 through the merger. He is chairman of U.S. Global Investors Inc., a mutual fund advisory firm, and previously served as chairman of CKE's audit committee.
• C. Thomas Thompson, a former president and chief operating officer of CKE from 1994 to 2000. In 2000, he also served briefly as chief executive and a director until his resignation later that year. Thompson has been a Carl’s Jr. franchisee since 1984 and is a principal in four Carl’s Jr. franchises operating 60 restaurants, the company said.

Under the terms of the merger with Apollo, CKE’s previous board was dissolved and principals from the private-equity firm were added as directors.

Also added were principals from Apollo Management, including the firm's co-founder Peter Copses, now chairman of the board; as well as Lance Milken, an Apollo partner; and Robert DiNicola, Apollo’s senior retail advisor for Apollo.