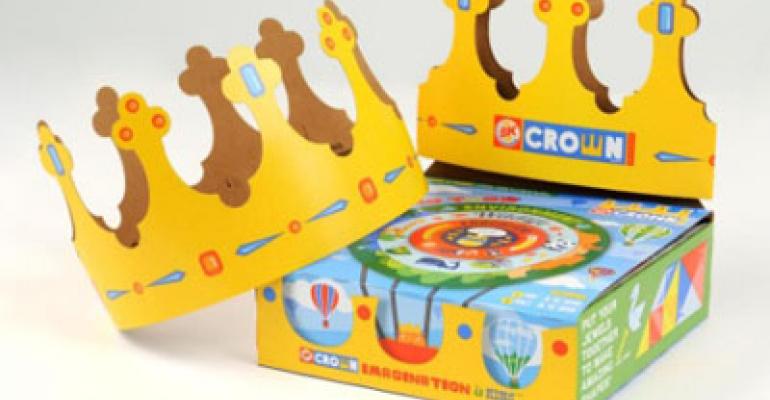 Editor's note: This story has been updated with new information from Burger King.

Burger King is putting its crown on the heads of children in a new marketing push aimed at promoting the chain’s more healthful kids’ meals.

The Miami-based burger chain on Monday rolled out the new “BK Crown” for its kids' meals with interactive box packaging that includes a cardboard crown, games and other toys. The crown itself has also been redesigned, with brighter colors, a slimmer style and more jewels, the company said.

The move comes at a time when restaurant chains have been criticized for the messages they send to young guests. Health advocates have blamed increasing obesity rates among children on the marketing of “junk food” to children that uses cartoon icons and toys in kids’ meals.

Voluntary guidelines are being debated on the federal level and within the industry that would restrict kid-focused marketing to only menu items that meet certain nutritional standards.

Over the past several years, the 12,300-unit Burger King has been working to improve the nutritional content of its kids’ meal offerings by adding Apple Fries, fat-free milk and lower-calorie options, such as macaroni and cheese.

The BK Kids' Meal line, for example, now includes oatmeal as a breakfast offering for kids.

Earlier this year, Burger King joined the National Restaurant Association’s “Kids LiveWell” program to showcase the more healthful menu available for children. At the time, Burger King stopped including fries automatically in all kids' meals, allowing children to customize their choice of sides and drinks.

McDonald’s has also made changes to its Happy Meal for children this year, reducing the number of fries and adding apple slices as a standard option. The new-and-improved Happy Meals are available in Southern California locations and will be rolled out nationally by the first quarter of 2012.

The new BK Crown program also invites children to visit a website where they can help support various charities by voting for their favorite to direct the company’s donation of one penny for every vote.

“At Burger King restaurants, imagination is king, and the new BK Crown program is built to inspire every kid’s imagination and encourage kids to learn more about how to give back,” said Alex Macedo, senior vice president, North American marketing at Burger King Corp. “We are proud to have great charity partners on this endeavor to help kids and families learn more about these important causes and feel empowered to make a difference in the world around them.”

To promote the new kids’ meal program, Burger King is also offering a Family Bundle deal for the first time. For $9.99, the Family Bundle includes one Whopper, a Whopper Jr., two small fries, two small drinks and a kids’ meal. The offer will be available through Dec. 4, the company said.