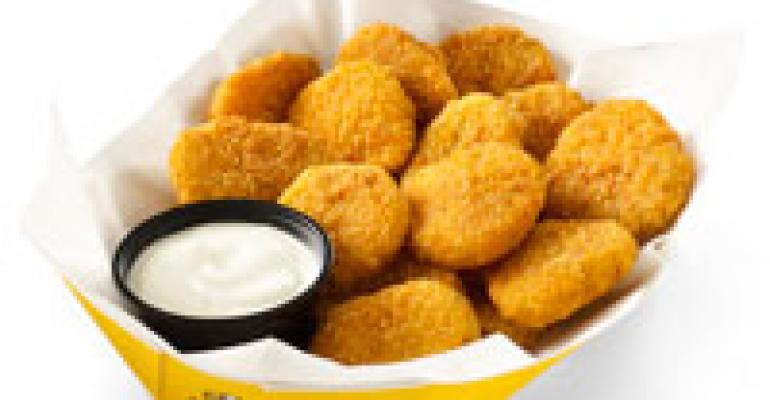 The recently introduced Late-Night Snack Menu, available from 9 p.m. to close on Sundays through Thursdays, offers sharable bites and appetizers for $3 each, including mozzarella sticks, chili con queso dip, roasted garlic mushrooms, mini corn dogs, chips and salsa, and regular onion rings. Some other new food items will debut May 1, including fried-pickle chips served with ranch dressing for $4.99, and four varieties of dry-rub seasoning for items like wings or French fries in such flavors as Salt & Vinegar, Chipotle BBQ, Desert Heat and Classic Buffalo.

Minneapolis-based Buffalo Wild Wings Inc., the operator or franchisor of 665 restaurants, also will have several new drinks, including three new margarita flavors: the Primo Margarita, the Twisted Margarita and the Berry Loco Margarita, which is served only on the rocks. Other new drinks include Wood Chuck Draft Cider, Corona and Corona Light, Budweiser American Ale, Bud Light Golden Wheat, a “J&G” cocktail made from Jameson Irish Whiskey and ginger ale, and the nonalcoholic Loaded Lemon Tea.

The announcement of new menu items comes the day after Buffalo Wild Wings reported first-quarter earnings growth of nearly 25 percent on growing sales, but also delivered a muted commentary on April sales trends and the outlook for the rest of the year.

The company said same-store sales in April were down from a year ago, and that achieving earlier stated corporate goals would require improved comparable-sales performance and a moderation of wing prices in commodities markets.

Buffalo Wild Wings president and chief executive officer Sally Smith said the company is “addressing specific unit performance as well as implementing systemwide strategies to drive sales.” She noted that the company expects to see year-over-year cost savings in the current quarter for traditional wings, as the market has declined steadily in recent months.

“While we believe that our previously-announced net earnings growth goal for 2010 of 20 percent may be achievable, improvement in same-store sales and moderate wing costs are key to meeting this goal,” Smith said.

She added that Buffalo Wild Wings has a “vigorous focus on the core elements of our brand that have been the cornerstone of our success.”

“Our diligence to improve our performance and build our sales and profitability will not waver,” she said.

First-quarter earnings rose to $10.6 million, or 58 cents per share, from $8.5 million, or 47 cents per share, in the same quarter a year earlier. First-quarter revenue grew 15.7 percent to $152.3 million, reflecting a same-store sales increase of 0.1 percent and 0.7 percent at corporate and franchised restaurants, respectively. New restaurant openings, including 29 corporate and 57 franchised units, also helped increase revenue.