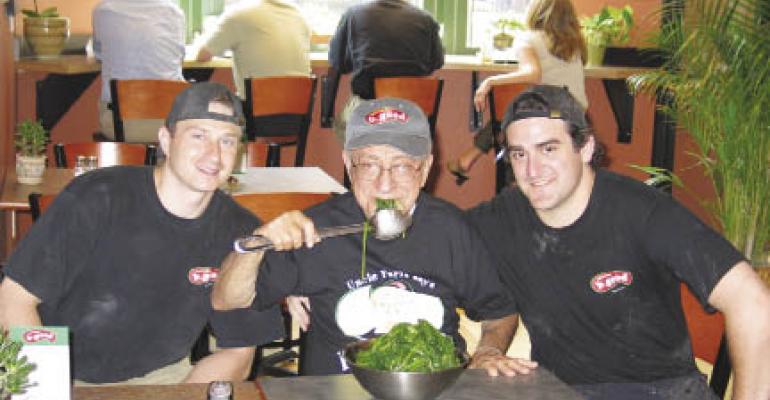 Business is all about family for Anthony Ackil and Jon Olinto, longtime friends and co-founders of the seven-unit b.good chain.

Loyal customers of the quick-service concept, which specializes in all-natural, hand-packed burgers, hand-cut fries and local salads, are called “cousins.” New units and other additions to the business are called “babies.” And the name honors Ackil’s Uncle Faris, a great cook who often reminded the men, who have known each other since sixth grade, to be good.

“There’s more to the b.good experience than just burgers and fries,” Ackil said, noting that the goal is to involve customers actively in the business through communications and contests. Menu items such as the Cousin Oliver and the Adopted Luke were named by customers, and the website hosts videos made by dedicated cousins, many of whom receive free fare for their efforts.

A customer also named b.good’s newest baby, Harvey. Harvey is a 28-year-old ice cream truck that roams the Boston area giving out shake samples. The customer’s picture is splashed across the truck’s side.

“We focus on the key people who love b.good, and then they help drive our business,” Ackil said.

So far that formula is working for the seven-unit chain, which recently has ramped up its growth. While the first b.good opened in Boston in 2004, two units have debuted in the past six months, and an eighth is scheduled to open in July. Ackil projects systemwide sales will be $7 million for 2010. Average start-up costs are about $310,000, he said.

So far, Ackil and Olinto, both natives of the Boston area, have remained close to home, although Ackil expects they will jump into a new, as-yet-undetermined market in about a year and a half. Until the business model is perfected, though, there are no plans to franchise, Ackil said.

“We have a small group of private investors that have given us the space to figure out our identity; they’re not in it for the short term,” Ackil said. “We have to have leeway to make mistakes and try things.”

Ackil said the concept — whose mission is to serve fast food made by people, not factories — has evolved and improved over time. Ackil and Olinto always had dreamed of owning a business together, but had no restaurant experience. The idea for b.good was culled from a list of 50 potential ideas drawn up one night in a bar.

“The first couple of months I don’t know how we made it through,” Ackil said. “The food wasn’t good, and we were so slow and screwed up everything. But we worked 120 hours a week, and we still do. …We both want to make this thing great and right.”

The chain prides itself on “real.food.fast.” All foods are made from raw ingredients, with meats ground daily and fries cut on-site. One b.good location sports a rooftop garden, and all vegetables are local. To drive that point home, pictures of the farmers adorn the units, which average about 2,000 square feet in size and seat about 50. Food costs are about 18 percent, down from 38 percent six years ago, Ackil said.

“Every day we try to improve on how we do things,” Ackil said.

The concept’s check average runs about $9.50, although it is considerably higher, $12, at the unit that opened last fall in Legacy Place, a lifestyle center in Dedham, Mass. Chainwide, lunch contributes about 55 percent of sales, and dinner accounts for 45 percent. Sales for dining in or taking out are split 50-50.

Ackil, who admittedly is  biased, thinks the food is “awesome,” but others agree.

“The burgers are great (I like the beef the best), and the menu is fun,” wrote Joan Wilder in a review that appeared in The Boston Globe in June.

She added: “b.good is an extremely welcome alternative to the fast-food burgers its founders loved as kids. I am happy and grateful to be able to eat at this place now — and to see fast food that is healthy (for humans, animals and the planet) moving into the mainstream.”