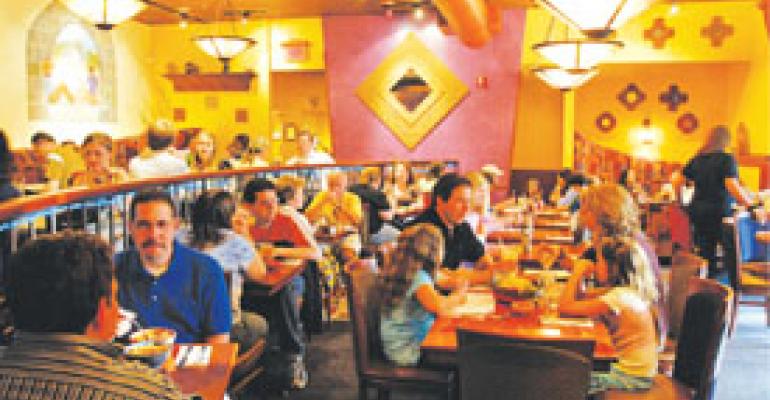 While many restaurateurs work hard to establish their brands in Manhattan, Howard Felixbrod, founder and chief executive of Blue Moon Mexican Cafe, says he would prefer to stay out of the aggressive borough.

“There’s no point in spending four times the amount in rent,” Felixbrod said. “In Englewood, we’re spending about half that and doing 30 percent more business, and people are happy.”

Which is not to say that Felixbrod is a stranger to the island. The Blue Moon Mexican Cafe concept actually got its start in Manhattan 20 years ago when Felixbrod, together with his brother Gary, opened locations in Chelsea and on the Upper East Side. His brother still runs the Chelsea location, and the Upper East Side outlet was sold to a partner back in 2000. But both units are operated independently of the chain.

Over the past several years, the brand has grown steadily, posting systemwide sales of $9 million for fiscal 2006. Company officials are projecting a 7-percent increase for 2007. Individual units generate annual sales that range from $1.1 million to $2.54 million.

According to the National Restaurant Association’s 2006-2007 Restaurant Industry Operations Report, the company has median total sales per square foot of $668, more than double the industry average.

“We’re comparable to [restaurants such as] Cheesecake Factory and so forth,” Felixbrod said.

After years of successfully running restaurants in Bergen and Westchester counties, Felixbrod now is fine-tuning plans that he hopes will expand the brand across the Northeast.The first step in the process was taken earlier this year when the company formed Blue Moon Franchises LLC.

The franchisee company signed an agreement in May with Franchise Development Network Inc. to assist in the brand’s northeast expansion. The New City, N.Y.-based consulting firm has sold more than 85 franchise locations in the New York metropolitan area since 2002 for concepts including Ranch *1, Little Scoops and The Original SoupMan.

“The unit economics for the company restaurants are phenomenal,” said Darren Yelin, president of Franchise Development Network Inc. “The Blue Moon Mexican Cafe has built a very loyal repeat customer base with their ‘neighborhood’ concept, and I believe the model has tremendous potential as a franchise.”

The initial franchise unit, which will be located in Morristown, N.J., is expected to open this fall. Englewood, N.J.-based Luna Azul Investment LLC will own and operate the store.

“Signing this agreement is a significant first step in the growth of Blue Moon Mexican Cafe through franchising,” Felixbrod said. “We have a loyal customer base in Bergen County, and I’m very optimistic we will duplicate our success in Morristown.”

The new store will be 2,300 square feet and is expected to seat 75 in the dining room and an additional 30 on the patio, Felixbrod said. This is consistent with most of Blue Moon’s units, although the Bronxville, N.Y., store seats 95 in the dining room.

The outlet will be located next door to the Community Theatre at Mayo Center for the Performing Arts, which is expected to generate added traffic, he said.

“It’s a great town and we’re looking forward to becoming part of the community,” Felixbrod said.

Community nights have proved to be another good traffic generator for the chain, Felixbrod said. Working with organizations including local high schools and sports teams, the restaurant donates 20 percent of all food sales for that group back to the charity. Since 2002, Blue Moon has donated more than $100,000 to community organizations.

“It’s been a great way to raise funds,” he said. “We get new customers, business on a slow night and great community relations.”

Felixbrod said Blue Moon Cafe LLC is setting a goal to open seven to 10 new franchise locations within the next year, using marketing as its primary tool to entice possible franchisees. Recently, the company placed an ad in The Wall Street Journal offering free dinner to any potential candidates interested in investing in a future operation.

“We’re so confident in our franchise that dinner’s on us,” Felixbrod said. “Candidates come in, sell themselves and have dinner.”

Experienced candidates are encouraged to apply, although those with less managerial familiarity will be provided with up to eight weeks of training to aid them in the franchise’s expansion.

“This is an exciting time to be a part of the Blue Moon organization,” said Christopher Persadie, director of operations of the chain. “Blue Moon has a 20-year track record of success and is now expanding.”

Felixbrod stated that 98 percent of the food is made fresh on the premises. The menu includes traditional Mexican fare such as tacos, burritos and quesadillas, and some more signature Southwestern dishes like Cherry Pepper Chicken and Camarones Chipotle.

The menu is expected to change about twice a year, he said. The average dinner check is about $18.

“We’re very big into expanding our sales beyond the four walls,” Felixbrod said.