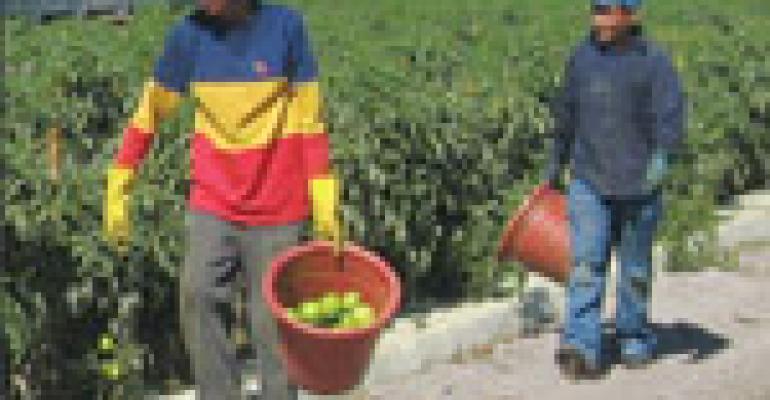 MIAMI Burger King, which has been the target of protests at its headquarters and restaurants by a farmworkers advocacy group, is refusing to pursue the course taken by several quick-service peers of paying Florida laborers a penny more per pound for tomatoes. —

McDonald’s and Yum! Brands already agreed to the demands of the Coalition of Immokalee Workers, or CIW, an activist group crusading for better wages and working conditions for tomato pickers, to pay 1 cent per pound more to suppliers who then would pass it on to their workers. But an official at the No. 2 burger chain contends the problem is not about paying workers better wages but the legality of paying a group of workers it does not employ. —

“We see no legal way of paying these workers,” said Steve Grover, BK’s vice president of foodservice quality assurance and regulatory compliance. “The CIW has gone after us because we are a known brand. But at the end of the day we don’t employ the farmworkers, so how can we pay them?” —

In addition, he asked: “If we agreed to the penny per pound, Burger King would pay about $250,000 annually or $100 per worker. How does that solve exploitation and poverty?” —

Florida produces about 85 percent of the winter tomatoes in the United States. —

Meanwhile, the CIW’s deals with McDonald’s and Yum, which rely on participating growers to provide sales and labor data to determine the added amount the restaurant chains must pay for tomatoes, is in danger of falling apart. The Florida Tomato Grower’s Exchange, an agriculture cooperative, said its members have refused to pass on the surcharge paid by Yum and McDonald’s because of concerns about the potential violation of antitrust, labor and racketeering laws. —

Both McDonald’s and Yum, however, issued statements saying they will continue to pay the extra penny per pound although it is unclear how the workers will receive the additional money if the growers refuse to accept it. —

Julia Perkins, a spokesperson for the CIW, said until the issue is resolved the money will be placed in a trust for the workers. Rob Poetsch, director of public relations for Yum’s Taco Bell, said the chain is committed to paying the extra penny per pound to the tomato pickers in Florida. —

“We believe it is the right thing to do,” he said. “We will continue to work with the CIW to accommodate this payment with our suppliers.” —

Yum was the first company to agree to the penny-per-pound surcharge for Taco Bell’s tomatoes in 2005 following the CIW’s four-year boycott of the Mexican quick-service chain. Earlier this year it expanded the program to include tomatoes purchased for its Pizza Hut, KFC, Long John Silver’s and A&W All-American brands. McDonald’s signed a similar agreement in 2007 following boycotts of its restaurants. —

Under the agreements, a third-party entity ensures the penny-per-pound payment goes directly to tomato pickers. McDonald’s would have started paying the workers the extra penny at the beginning of this season’s harvest, which began in mid-November. —

Grover maintains that other major chains also have been contacted by CIW. —

Perkins concurred, saying the group is in talks with other chains across the country, although those talks are preliminary. —

“We’ve had top antitrust lawyers look at [the agreement] and say that,” she said. “McDonald’s and Yum’s lawyers have looked at the agreements and have said this does not violate any antitrust laws.” —

The Tomato Growers Exchange, which represents 90 percent of Florida’s tomato growers, said tomato pickers earn an average of $12.46 per hour, or nearly double Florida’s current minimum wage of $6.67. Perkins, however, said those numbers are distorted, adding, “The workers’ annual income is close to about $10,000 per year.” —

Grover said Burger King was in negotiations for two years with the CIW in an attempt to reach an agreement, but the company was never satisfied with the CIW’s allegations. Saying that Burger King cares about the workers’ conditions, he called the CIW an Internet activist group that doesn’t represent all of the workers and said it lacks transparency. —

“To me, this is all about the activism—all about crushing Yum and McDonald’s and now Burger King,” he said. “Plus, there is no way of knowing where the money goes.” —

Grover said another issue is CIW’s insistence that tomato pickers are being treated like slaves. —

“We just don’t see that,” he said. “Certainly there have been abuses over the years, but those things have been addressed and will continue to be so on an ongoing basis. We want all of those in our supply chain to be treated fairly.” —

Perkins said that while the key issue is about wages, it also is about overall working conditions for the mostly migrant workers. —

“This is the last bastion of severe labor exploitation in this country,” she said. “We should be thinking about the dignity of the human beings who put food on our table.” —

“We got fed up, so we started a nonprofit [organization] called SAFE, which stands for Socially Accountable Farm Employers,” he said. “Of the 12 major tomato farms in the state, already nine have earned the certification. This is a very progressive program and I believe the first of its kind for any kind of produce.” —

Burger King and the Florida Tomato Grower’s Exchange said that rather than talking about the issue, they agreed to take interested parties to the fields to view the conditions for themselves. BK recently conducted a press tour to the fields of Immokalee that also included a visit to farmworkers’ homes and to the offices of the Redlands Christian Migrant Association, or RCMA, an organization that provides education and services to farmworker families. —

During the visit, Burger King presented the RCMA with a $25,000 check from its Have it Your Way Foundation. Grover said Burger King believes this is a better and more visible way to help the farmworkers. —

“We know where the money is going, and when it is sizable like that, it can actually make a difference to the farmworkers,” he said. —

During the visit reporters met with Andre Raghu, a global managing director with the third-party auditor, Intertek, who flew in from New York for the tour. Raghu said the audits, which took almost a year to complete, found no slave labor or human rights abuses. Instead, he said, the main findings were such things as the need for improvements in operations and some occupational safety issues. —

Juan Zapata, the Republican state representative from Miami, also accompanied the tour. Zapata spent time speaking to several of the migrants in their native Spanish and later made no secret of his feelings for the work of the CIW. —

“These attempts at corporate extortion have to be stopped,” he said. “This group’s trying to get hush money, and it doesn’t benefit anyone. Holding corporate America hostage in no way benefits the migrant worker.” —

However, the CIW’s Perkins said her group would continue to exert pressure on Burger King. —

“The breadth of the campaign is really broad, and human rights organizations are watching,” she said. “It will escalate, and consumers will continue to put pressure on Burger King to do the right thing.” —